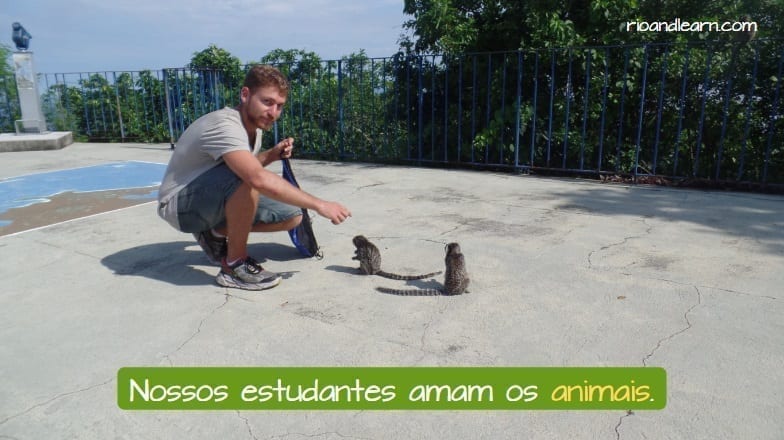 Other Animals Without Gender in Portuguese

There are also some animals that, despite being male or female, have only one written gender. Let’s see:

In these cases, if you want to say the names of animals in Portuguese and specify if it’s a male or a female, you use the name just learned, plus the gender; for which, you are going to use the words Macho and Fêmea in Portuguese.

Examples for Gender of Animals in Portuguese

A coruja macho e a coruja fêmea.
The male owl and the female owl.

Notice that, despite the gender, we are going to use the articles “O” and “A” according to the name of the animal.

Have you ever seen a cat on Copacabana beach? Is this a weird question for you? Let us explain! When you think that a man is handsome or a woman is pretty you can call him a gato and her a gata. Also, if you have a partner, a boyfriend or a girlfriend, you can call them gatinho or gatinha (kitten). That’s a common nickname we have in Brazil. So now you know cat in Portuguese is something else other than just the animal!

It’s a universal knowledge that the dog is the man’s best friend but there is something about the word cachorro that you may not know. This is not something that you would learn from self-study. However, if you study Portuguese in Brazil, you will learn that the word dog (like many other words!) also has another meaning:

How sexist is society sometimes, right? Of course, you are not going out calling people dog in Portuguese!

Besides being healthy, eating fish is also delicious and here in Brazil you will find different fishy dishes. There are many types of fish and they have different names in Portuguese. Check out our Dica about Fish in Portuguese to discover all about the best fish to eat here.

Have you ever wondered which country has the most species of monkeys? If you thought about Brazil, then you are right! Did you know that there are at least 102 different species of primates in Brazil? Those extraordinary intelligent and agile animals enrich our fauna and are extremely important to our country. What about learning how to pronounce in Portuguese the name of some of them? Don’t want to pagar um mico next time you get to see them close? Let’s memorize how the Brazilians call the different kinds of monkey in Portuguese! 😛

Pronunciation of Animals in Portuguese

Now let’s see if you learned all the names of animals in Portuguese with this exercise. Don’t forget to turn the subtitles on.

Brazil is a place with a lot of exotic animals. If you want to get to know them better and know more names of animals in Portuguese, read our dica about Exotic Animals in Brazil. Some animals have a very specific natural habitat, the zebra in Africa and the jaguar in Brazil, for example. So, even if you now know the name for bear in Portuguese, remember there are no bears in Brazil!

Can you find some of the animals on the exotic animals list in your country? Tell us! This was our Dica about the names of animals in Portuguese and we hope you enjoyed it! Go to our Youtube channel and see our video of Floresta da Tijuca. Can you spot any animal there?