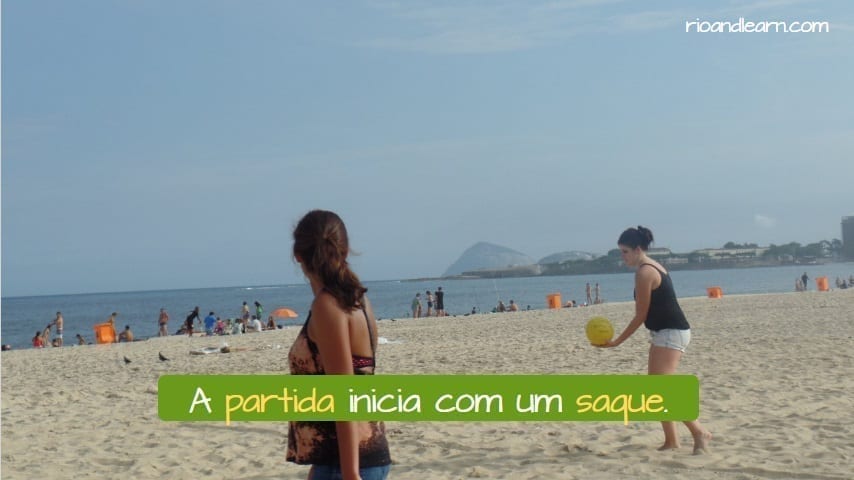 What is beach volley?

Beach volley is a very common sport practiced on the beaches of Rio de Janeiro. It is a sport for doubles, different to regular volleyball games which can have up to six players. Have you ever played it? It is common in your country?

What are the basic beach volley rules?

To play beach volley, first you need to check if the beach has posts to set up the net. The net must be well put up and pulled tightly. Each side of the net is called a court, and each court must have two players. The beach volley court dimensions must be exactly 8 m x 16 m , a little bit smaller than the indoor volleyball court.

The match starts with a serve, which is when a player hits the ball for the first time. Each team can touch the ball a maximum of three times before passing the ball over the net into the opponent’s court. In relation to scoring also, beach volleyball differs from conventional volleyball, as any team can score and it doesn’t matter which of them served. The objective is to hit the ball over the net, with the goal of getting it to fall on the ground of the opponent’s court. In order to achieve this, the team needs a good offense, which we call spike. The best offense or attack is usually comprised of three touches: the bump, the set and the spike. Seems a lot fun, right?

Beach volleyball matches are won by best of three sets. The first two sets are played to 21 points and the last one, the tie-breaker, played to 15 points. To win a set the team must have two points above the adversary.

If the opponent makes a good defensive move, without dropping the ball, we call it a block. The block counts as one of the three touches on the ball.

The team that won the point will serve next. The player serving the ball must be alternated between the two team members, he/she must serve from outside the parameters of the court, not letting their feet touch the court end line and hitting the ball with one hand.

Hand setting rules in beach volleyball are a little tricky if you are used to play on indoor courts. For beach volleyball, the thing is to know how to deliver a good bump set, this enables the players to have better control of the ball. A bump consists on holding your arms at a 90-degree angle away from your body with your hands together, keeping the knees bent. It is used to receive the ball served from the opponent’s attack, so the ball goes high and gives time to your teammate to find a way to get under the ball and find a spot to set.

Players can touch the ball with any part of their bodies, usually the players use their fingerprints to touch the ball instead of their hand in order to avoid unintentional carrying or lifting. That is because they are not allowed to have a prolonged contact with the ball, in this case it can be seen as a rule break. Beach volleyball illegal hits consists of the ball being visibly resting or touching a single player for a long time such as throwing, lifting and holding the ball.

Usually, beach volley matches are a twenty one point game to close a set. To win, it is necessary for the team to have a two point advantage over their opponents. In the case of a team scoring twenty one points, while the other team has twenty, the game continues until the two point difference is achieved. In the case of a tie with one set each, a third set will be played, and the team who scores fifteen points wins.

That’s all friends! Now we know the beach volleyball rules. Ready to play? In our classes we take you to the beach where you can learn a lot while enjoying the sun and getting a tan!

Recently there was a huge controversy about the beach volley clothing rules. Some people were questioning why women were required to wear bikinis to play beach sports at the Olympics. The climax was when Norway’s beach handball team decided to wear shorts instead of the traditional bikinis, and they were fined 150 euros per player.

For one thing, it was a long time ago when we started to discuss the idea of a “apologetic female” in the clothing used by female players. The amount of shiny colors, girly details and body showing could be, from one point of view, a way to force a femininity into the sports being seen as masculine territory. These days these rules still apply, is it necessary to keep them?

In the 2020 Tokyo Olympic Games, 22 pages of uniforms guidelines were issued with very strict specifications regarding fabric, colors and size of the clothes the athletes should wear. For women, beach volley bikini rules are plain and simple: female players should wear short sleeves and tank tops or a one or two-piece bikini. Men are usually seen with tank tops and board shorts, but some of them prefer to play shirtless.

Beach volley outfit rules seem to be understandable for some of the athletes.  They defend the idea that the two-piece bikinis are, in fact equipment. In their opinion, they are used in order to be comfortable to play in hot weather.

The use of bikinis in Beach Volley is explained by the origins of the sport. First played on beaches like in Rio de Janeiro, the weather justified the use of bathing suits because a lot of fabric would be uncomfortable.  Also, one piece bathing suits are not good either, because they allow sand to get inside and distract the player from the game.

Take a look at some important words that we used during this Dica.

What about coming to practice beach volley in Rio de Janeiro with us at the school? Or better yet, on the beach, in one of our RioLIVE! Activities?

With the vocabulary you’ve just learned about beach volleyball rules, complete this text:

We will be waiting for you!
A big kiss!