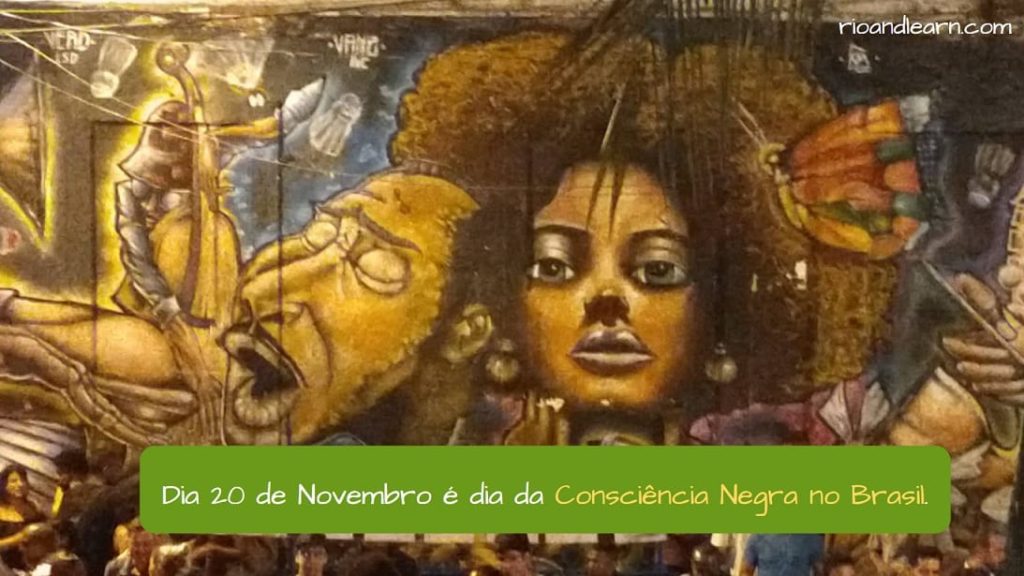 Hey galera! Everything’s good? Do you know what we celebrate on 20th of November? It is Black Awareness Day in Brazil, a day to celebrate awareness of the black community for the journey and circumstances their ancestors came to Brazil and the wealth of contribution to the country and society, that has in the past not always been recognized.

When is Black Awareness Day in Brazil?

The Black Awareness Day in Brazil

The date of Black Consciousness Day Brazil was chosen because one of  the greatest civil rights activist in Brazil: Zumbi dos Palmares. This is the anniversary of his death. He fought bravely against slavery. The special date to celebrate Zumbi was established in 2003, but was only made official in 2011.

More than just a celebration, it is a day to think about the position that Black people have in society then and now. The past generations who have suffered (and still suffer) through racist acts, despite the abolition of slavery in 1888, discrimination still continues. It’s a day dedicated to fight racism and defend Black people’s rights and respect in society.

The National Black Awareness Day is only a public holiday in some Brazilian states such as Rio de Janeiro, Alagoas, Amazonas, Amapá, Mato Grosso do Sul and Rio Grande do Sul.

The leader in the fight against slavery in Brazil was Zumbi dos Palmares, who was not born into slavery but was born in a Quilombo. Quilombos were communities where people who had been enslaved and managed to escape, lived together in freedom. There, he fought until his death in defence of his people against the oppressors who enslaved them.

Quilombo dos Palmares was located on a long strip of land, stretching about 200 kilometres, near the coast; between the Cape of Santo Agostinho in Pernambuco, and the northern part of the São Francisco River, now in the state of Alagoas. Zumbi dos Palmares died on November 20, 1695, at the age of 40.

Black Awareness and its History

The various African groups who came to Brazil in the early 16th century did not recognize themselves as black (as we recognize today), but as Bantos, Hauzas, Kanembus, Fulas, and so on, referring to the ethnic groups to which they belonged.

After the formal abolition of slavery on May 13, 1888, freed black people had to now confront a new fight: the fight for equality and civil rights.

This feeling of discrimination alienated black people from society, education, and consequently marginalized them in the labor market. Over time, the discrimination has decreased and black people began to have opportunities in sports, in the arts, but not so much in high society or the ruling class.

The Black population campaigned for a symbolic celebration of the constant struggle for their release, and for the end of discrimination and prejudice. The creation of Black Awareness Day in Brazil is a way to value the brave people that contributed so much to the Brazilian culture and who were unjustly enslaved by the white man.

As of January 2003, the Federal Law 10,369 established National Black Awareness/Consciousness Day in the school calendar and teaching Afro-Brazilian culture became a part of the curriculum for all schools in the country, and now incorporates typical activities and projects that celebrate the history of African Americans.

Additionally, there is also the intention to make the population aware of the importance of black people socially, historically and culturally in Brazil.

An important reminder! Unlike many other languages, in Portuguese the word NEGRO is not offensive!

How to fight against racism?

The racial issue in Brazil is very important and can be complicated, so in our classes we try to teach our students about it and we can recommend you some authors for you to read. We must understand that racism is not an issue for black people but for society as a whole.

So what can we do fight against it? As we are learning Portuguese online, we’ll show you some expressions that are considered to be racist, but still used by many Brazilians on a daily basis. That way you’ll know how to replace them with appropriate expressions.

As we said above, these words are still common in Brazilian society, but more and more people are starting to gain more conscious and fight against what’s wrong even if it is consolidated in our society.

It is not enough not to be racist, we have to be anti-racists.

Vocabulary of the Black Awareness Day in Brazil

Want to learn more about Brazilian’s culture? Come have Portuguese classes with us!

You’ve learned a lot today, now it’s time to practice your Portuguese! Say if the sentences below are true or false according to what you read. You have to put a (C) if it is correct and a (E) if it’s false. Don’t forget to rewrite the wrong sentences correctly!

That’s it! Did you like learning a bit more about Brazilian History and Culture? Have you ever celebrated the Black Consciousness Day in Brazil?

See you in the next Dica!