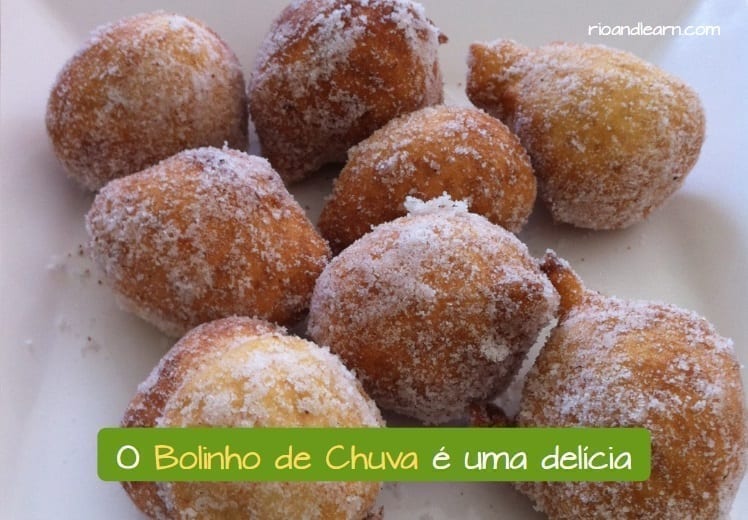 Hey, guys! Have you heard about the Brazilian bolinho de chuva?

Bolinho de chuva makes us remember childhood. When it’s cold in Rio de Janeiro, it’s very common to make these bolinhos at home. In Brasil, it’s typical to eat these bolinhos when we are kids. Do you know how this bolinho became so popular?

Bolinho de chuva appeared on the 19th century. At that time, wheat was very expensive so some recipes decided to substitute is by manioc flower. The dough of the bolinho de chuva is very similar to the one used on Sonhos Portugueses, however these sonhos have filling and were prepared by the Sinhás (word used by slaves to refer to theirs owners).

The bolinhos de chuva came from the hands of the slaves, and for some time they were called bolinhos de negras. Of course the sinhá loved it and from the kitchen they went to the dining tables as a dessert wrap in leaves of banana tree.

Brazilian Bolinho de chuva is delicious!
Let’s take a look at the recipe:

How to prepare bolinho de chuva

Here it is, guys!
Now we know the recipe of bolinhos de chuva in Portuguese. A great call for cold day.

We’ll meet again soon on our next A Dica do Dia!
Sweet kisses for you!