Hello there! If you are a guy, this is the Dica that will make you even more stylish after reading! Let’s study today the vocabulary related to Brazil men’s fashion! Do you think you are someone that has a sense of style? How would you categorize your style? Brazil men’s clothing have some common things with other countries, and some very different things! If you ever get the one-year Brazil student visa, don’t forget to bring your summer clothes mentioned below!  Let’s take a look?

The way we dress can give away a lot about our personality, through our clothes we can express who we are even to people that don’t know us.

Here in Brazil, you will hear the words blusa, camiseta, regata and camisa, to refer to the clothes we wear in our torso. The blusas are a t-shirt with a basic design and loose mid-bicep sleeves, they can come in many colors with all kinds of prints and patterns. We call regata/camiseta a sleeveless shirt, and some men wear them under the camisa or the blusa. The regata is for sure one of the main items of Brazil men’s clothing. The opposite of the regata would be the blusa de manga comprida. The word manga comprida refers to the length of the sleeve and means long sleeves, they cover the entire arm, usually to keep the person warmer. 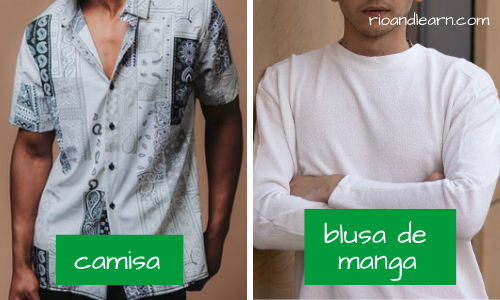 A camisa is usually described as a more formal shirt. They might have a better quality fabric that needs to be ironed. The camisas can consist of an enormous variety of collars, sleeves, and cuts. They may or may not have buttons down the front. Men typically wear what we call camisas under their suits on special occasions such as weddings, proms, and other parties. They can also be used at work to look elegant and professional.

One fun thing to notice here in Brazil, when you get the opportunity to come here to study Portuguese, is that we will usually refer to the official soccer teams shirt as camisa de futebol and we would also mention them according to the team they support, for example: “camisa do Flamengo, camisa do Botafogo, camisa do Vasco” some men refer to their camisa de time as manto sagrado, which the direct translation would mean the holy mantle! 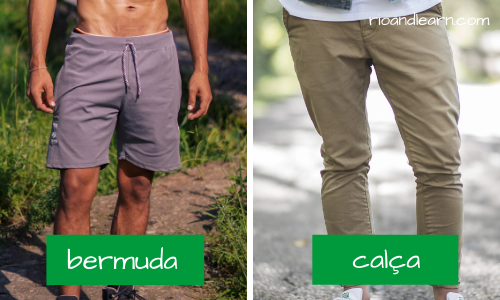 The bermuda and the calça are the articles of clothes worn to cover the legs. The calça is long and usually reaches the heel. Meanwhile, the bermuda won’t go too much past the knee. The bermudas are usually baggier because they are supposed to be very comfortable. The most common and popular type of pants is probably jeans, and here we call them calça jeans.

During the summer in Rio, it is so warm that it is almost rare to see a person wearing calças, people rather wear shorts and bermudas. We also use the word short to talk about even shorter types of pants. Still, we pronounce this word with a different accent, it sounds almost like “shorchi” and we apply both the word in the singular and plural form, referring to it as short or shorts.

These are the two pillars of underwear: the cueca and the sunga. While men use cueca in their daily lives, the sunga is only used as a swimwear. Cuecas can come in many shapes and sizes. The one in the picture which is longer and resembles a pair of shorts in called cueca samba-canção! Also, many men wear shorts to swim because they feel more comfortable than wearing sungas, the bathing suit that is tiny, which can make them feel much more exposed. 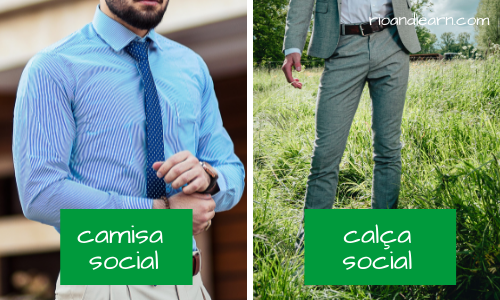 The suit is mainly considered a three-piece set of clothing used in very formal situations. We begin with the camisa social, which is a type of camisa we saw earlier, but with longer sleeves and cuffs. Then, comes the calça social, which also has a very different type of fabric and cut. And finally, to complete the set, we have the blazer, that goes on top and might keep you warm during winter days.

Some of the masculine accessories we are going to mention here in this post are: suspensório, gravata and gravata borboleta. The suspensório always comes and goes in fashion, they were originally designed as a tool to be kept hidden under the jacket and to hold up the pants and keep them fitted to the body (in a similar function that the belt has) now are actually used with a more aesthetic purpose, and worn in a way where they are intentionally exposed as a fashionable item.

The gravata is this accessory that is fastened around the neck, usually on the collar of a camisa, it is  fundamental for looks that demand even more elegance, or for work environments that require the gravata for its employees. The gravata borboleta in turn is a type of tie, which instead of being elongated and hanging above the camisa, it is shorter and is closer to the collar, in a bow shape, so it takes the name of borboleta, in reference to the well-known insect with beautiful wings, the butterfly.

Now that you have seen the vocabulary, repeat with us using this video as the guide for our pronunciation?

Now, guys, what are you wearing at the moment? Can you give us a description? Tell us in the comments but don’t forget to mention the colors as well! Do you think Brazil men’s clothing is something similar to what you wear?

Hope to see you in our next Dica!
Thanks!