Are you ready for this?! Let’s go!

Brazil’s governmental structure is not that hard to understand. Brazil is a Federal Presidential Republic, formed by a union of: the states; the Federal District; and the municipalities. We have a control system to ensure that the law and the Brazilian Constitution are followed. As many people know, Brazil’s presidential system is simple. Brazil is a Federal Presidential Republic, and we elect the president every four years. They are the head of state and he or she has the power to execute or veto laws and also administrate the country.  On free to view television channels, during the electoral process, there is a mandatory 20-minute break for parties to campaign. It is pretty boring for some people, lol!

We can divide Brazil into 26 independent states and one federal district, which is Brasília, the capital of the Republic. Each of the states and the capital are represented by stars on the Brazilian flag.

We can divide Brazil’s Political System in three branches of government: Legislative, Executive and Judiciary. These branches are divided again into the federal, state and city spheres. Let’s understand each part of the Brazil political structure! 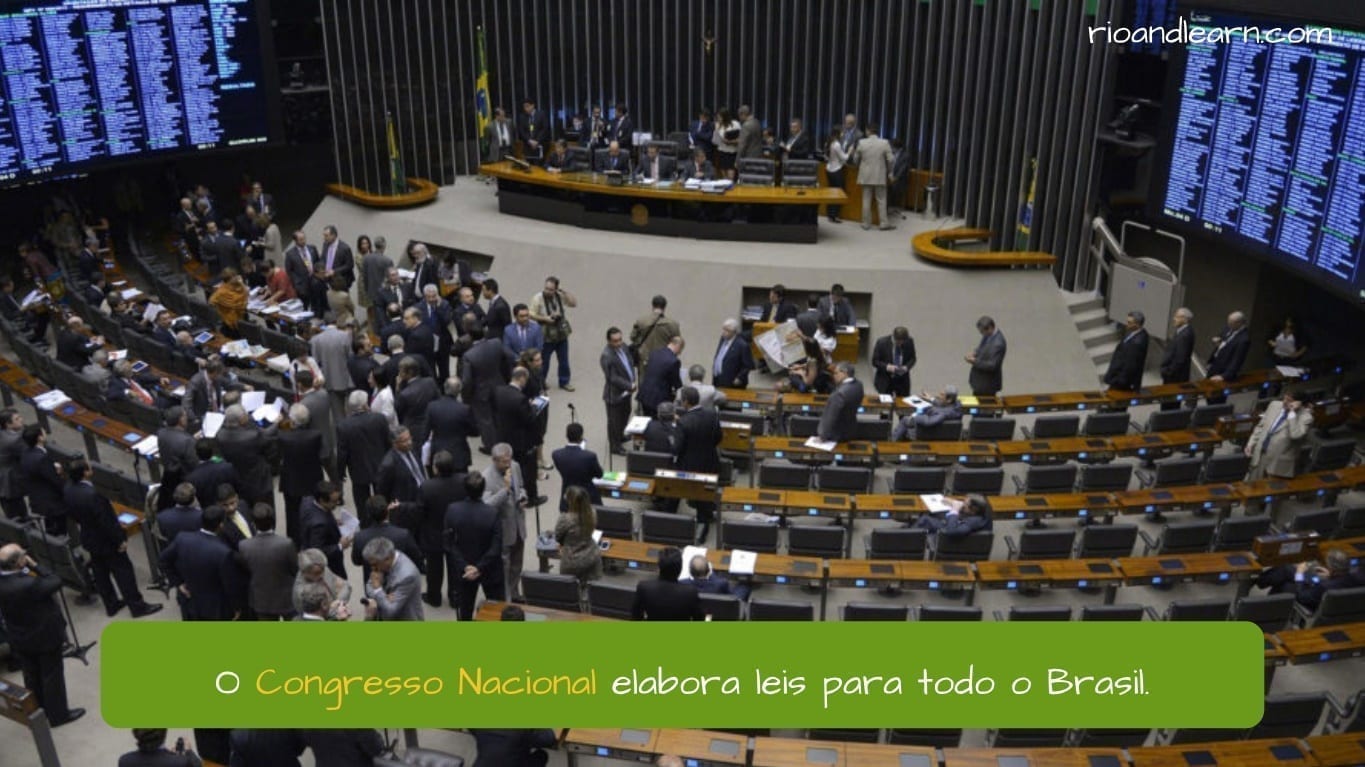 Firstly, the Legislative Branch is involved directly with laws. This is the branch that basically has to create new laws and also change old ones if necessary. Both of these tasks need to go through comprehensive voting. In addition they are in charge of supervising the executive branch and point out if there is something wrong with the public administration.

Did you know that the former football player Romário was voted in as a Senator in 2010? 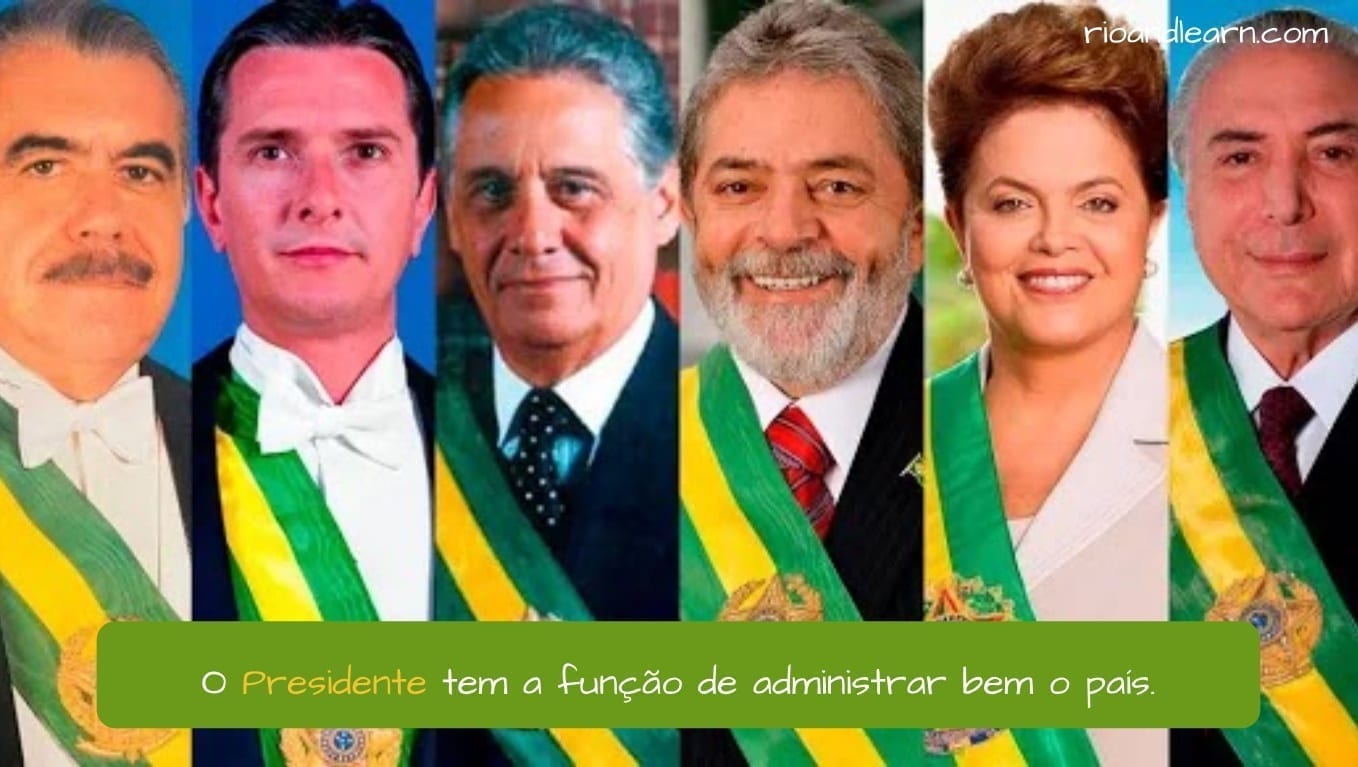 So let’s say that the Executive Branch is the country’s highest level administrator. This branch applies the laws approved by the Legislative Branch and makes people obey the laws. There is a difference to be aware of between the executive and the legislative: in the legislative branch the number of representatives is way bigger than in the executive branch, which has just one representative for each sphere:

If the President or any other representative of each sphere is impeached, their deputy takes office.

The Judiciary Branch is responsible for judging possible law infractions existing in the country. This branch judges each case, comprehending the situation and looking for the best, fair and well balanced judgment. The judiciary branch presents some differences from the others.

So this branch is not separated into spheres, but in something that we call subjects, that are different areas in which justice works. We divide them like this:

We divide them into 3 levels, the highest being the supreme court of each area, and all these of supreme courts are under overall supervision of the Supremo Tribunal Federal (Brazilian Supreme Court). It’s important to say that the people in charge of these courts are ministers chosen by the executive branch and approved by the senate.

Brazil politics and its partisan system

Political parties in Brazil have existed since the first half of the 19th century. Several of them have emerged since then, but none of them lasted very long. Therefore, there are no centenary parties in Brazil and the number of parties keeps on growing and growing. So Brazil has a multi-party system and there are many, many parties, such as various center parties, center-right, center-left, right, far right, left, far left parties. Wow, I’m getting dizzy now lol.

These parties can organize themselves as they want to, and may or may not receive parliamentary or popular support. Some are independent, but they never get very far in elections. This Dica won’t be able to talk about them all, but you can see here the complete list of political parties in Brazil.

Voting is a legal obligation in Brazil, which means that every citizen from 18 to 65 years old MUST vote. The consequence of not voting can be really serious. First of all you have to pay a fine, secondly you can’t get a passport, a bank loan or even applying for a job in a public institution.

According to the Brazilian political system, there are two different periods for elections in Brazil. One period is to vote for president, governors, senators, and congressmen and the other one to choose mayors and councillors. That means that every two years Brazilians need to vote for something. Bear in mind that a political term lasts for 4 years, so if we are voting for a president in 2018, we will vote for a mayor in 2020, and than vote again for a president in 2022. Yes, it’s a lot of voting!

So although we have many elections, many people consider voting very important for Brazilian democracy because Brazil went through a long period of Military Dictatorship in which people could not vote. However, in recent times there have been many debates about mandatory voting, which has caused some political problems in Brazil.

Brazilian politics and the importance of democracy

Indeed some Brazilians would prefer voting not to be mandatory and others want voting to remain mandatory. What do you think about this?

Brazil went through a long dictatorial period, that began on April 1, 1964 and finished it in March 15, 1985, under the command of successive military governments. The dictatorship had a strong authoritarian and nationalist side, and began with the expulsion of João Goulart, who was the president and who had been democratically elected. In this period, many people were arrested and murdered for protesting against the dictatorship and for calling for the return of democracy.

The regime ended when José Sarney assumed the presidency and re-established an electoral system in Brazil again! So because of this many believe in the importance of mandatory voting to maintain the political stability.

Something also interesting about the elections in Brazil is the fact that all the voting process is electronic. While many countries use the paper ballot to vote, in Brazil, people use a machine to do this. We have been using this electronic machine since 1996. A practical and faster way to vote and to know the results.

The politics of Brazil is VERY crazy, and the roots of this crisis are very complicated, but let’s try to understand it. So, we could say that the current crisis started in 2013, in São Paulo, when many street protests took place due to the Brazilian population’s distrust of public institutions, the government, and Brazilian political parties. This dissatisfaction with the rising cost of living reached a pinnacle with, yet another increase in inflated public transport fares, triggering major public commotions in thousands of cities. These demonstrations also ended up drawing widespread attention to other areas of mismanagement such as education, health and safety.

Moreover in 2014 Operation Lava Jato started, which was a series of several actions carried out by the Federal Police denouncing corruption schemes, leading to the arrest of some big politicians. Many of President Dilma Rousseff’s allies (amongst many other politicians from across the political spectrum) were involved in these corruption schemes, and so her public image was destroyed, which contributed to her impeachment process in 2016 – ending thirteen years of left-wing Government ruling the country. She was forced out of the presidency, and that’s pretty serious, but there are questions as to whether this was legitimate.

The emergence of polarization in Brazil’s political crisis

The left-wing and the right-wing party followers were watching the impeachment trial as if it was the World Cup final, cheering for their side! These moments just confirmed the strong feeling of polarization and ideological opposition in Brazil. The “Pros-Dilma” were dressed in red when going to the streets; and the “Anti-Dilma” dressed in green and yellow of the Brazilian flag, many using the Brazilian soccer jersey to represent this right-wing view. And still today these are the main colors of these parties.

So Michel Temer, the vice-president replaced Dilma in 2017. But he had many differences from Dilma, as it had been a coalition government and they were from different parties, and with different policies.

He only spent a short time in the presidency (this period was nuts!) and the general population wholly disapproved of his government, which also had criminal proceedings eventually leading to his arrest. Thus, the political crisis in Brazil only deepened.

The politics of Brazil and the beginning of the current crisis

The political issues in Brazil in the year 2018 were very, very crazy (crazier than before? Well, you tell me!) and it all started when the former president Lula, who popularly had the title  “The father of the poor”, was arrested by the Operation Lava Jato. Just to remind you, he was the front runner for the election.

But, hold your horses… there is another plot twist, we’re not at the end yet! In that same year, the right-wing opposition (our current president of Brazil) Jair Bolsonaro, was stabbed in the stomach (yes, you read it right!) during his election campaign and was hospitalized, meaning that he could not participate in any live debates throughout the rest of the campaign. As you know, he is still alive and still causing a lot of controversy in Brazil.

His government is also marred by many crises and controversies. Bolsonaro is famous for his strong Christian and nationalist stance and in many speeches on television he talks about the desire for the military dictatorship to return and is currently questioning Brazil’s voting system.  He is commonly recognised worldwide as a man who speaks, according to the opposition, a load of baloney!

So Brazil’s current political situation is all about polarization and lots of political fights on the internet and on the television. It is getting stronger, and every time  there there is a demonstration and the famous “panelaço”, when people bang on their pots and pans in protest, every time the president gives a speech on television. I told you that the Brazilian political environment is crazy. So if you ask me, I would tell you that the Brazilian political climate is heating up and people are excited and nervous about the next elections.

Brazil’s political situation in 2020 to 2021 got even crazier with the Covid-19, and many people are accusing the government of being responsible for the deaths and the lack of investment in healthcare. So now the Covid CPI is currently underway, which is a parliamentary commission investigating omissions and irregularities in federal government spending during the Covid-19 pandemic. Every day something different happens in Brazil on this committee and everyone is following it like a novela!

The political economy of Brazil has been historically based in a strong state (federal) presence with lots of Keynesian policies. Well, big companies, public companies and public Institutions dominate the economy of Brazil which is based mainly on the primary sector. Brazilian currency was quite weak historically on the 20th century, becoming more stable in the 21st century but still quite dependent on the American Dollar and on the main foreign currencies.

Brazilian industry is mainly based on agricultural production. Our big exports are soy, chickens, beef and orange juice, and Brazil is also a leader in the production of sugar and tropical fruits. Well, we love fruits and we certainly have a lot of them around here, right? Also being very famous for the meat industry, we love a good barbecue. I think you know that, right?! 😉

Complete the sentences below using the words from the boxes:

Ok, galera! We’ve completed this Dica about the Brazilian political system. Subscribe to A Dica do Dia  for more Portuguese language and cultural information.

Click on the links below to see more related Dicas
Colors of the brazilian flag
Who is Getúlio Vargas?
Brazil Dictatorship
History of Rio de Janeiro