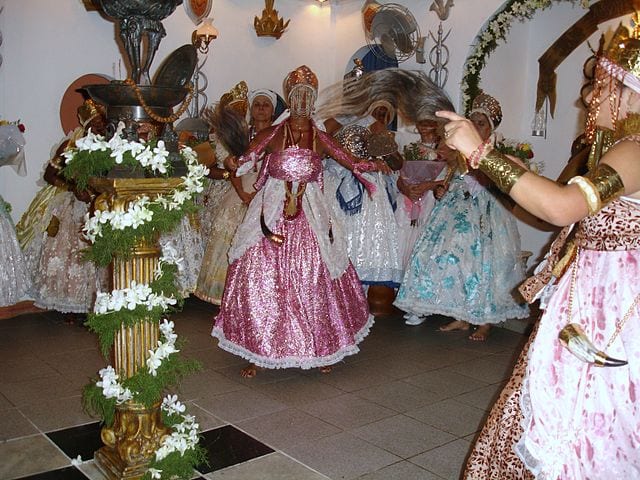 Brazil is a very diverse country, especially if we talk about religions. And one of our main characteristics is syncretism – or the combination of different beliefs and tenets from several different religions. This crazy mix of faiths is actually one of the things that makes this topic of religion in Brazil so interesting. So today, we’ll take a look into Brazil’s religious beliefs, the main religion in Brazil, and some systems of belief that came to be in our country, like spiritism and African religions in Brazil. Let’s go!

The People of Brazil and Religion

In general, Brazilians tend to be very religious. Even if they don’t practice a religion, they almost always try to follow some sort of doctrine. It’s really common to know Brazilians who pray or ask something from God before going to bed. Religious expressions, such as meu deus or salve, are also very widespread in Brazil.

The Brazilian Constitution states that we, Brazilians, are free to follow any religion of our choice. And Church and State are completely different matters. Despite the existence of some fanatics who cause some uproar with their intolerance, Brazil is still regarded as a country that defends freedom of religion.

We might be known for our diversity, but the main religion in Brazil is followed by a huge chunk of the population when compared to the other ones. The dominant religion in Brazil is Catholicism – in fact, Brazil has the largest numbers of Catholics in the world. This is a direct inheritance from the colonial era, when Christianity was spread and taught by Jesuits across the country.

There is, however, an interesting trend: over the years, more and more people have adopted secularism (no faith) and Evangelical Protestantism. And people have begun to speculate when will Brazil’s religious beliefs completely shift from Catholicism to something else. But how can we segment Brazil’s population by religion? Let’s take a look!

Brazil’s religious demographics are not as diverse as you’d imagine, but the data is constantly changing! This graph is based on the 2010 census: The Fastest Growing Religion in Brazil

Protestantism is by far the fastest growing religion in Brazil, and it has taken the country by storm. In the 20th and 21st century, Brazil received a great number of missionaries who hoped to spread their faith here. Just in the last few years, for example, Rio de Janeiro elected a Evangelical mayor and had its first Mormon temple built. Evangelical church leaders often dabble in politics as well and they’re seen as real and legitimate contenders for office due to their immense popularity brought about through TV and radio shows. Protestantism, particularly evangelical churches, have carved a clear path amongst Brazil’s religious beliefs, and they’ll likely outnumber Catholics in some years to come.

As mentioned before, Brazil’s diversity and syncretism have made it a quite unique place. Thanks to a mishmash of cultures and beliefs, new religions have surged and old ones gained more space here than in their original countries. So let’s talk about some of the most remarkable and unique when it comes to Brazil and its religions.

Although Spiritism began in France with Allan Kardec, it was in Brazil where it gained notable popularity. According to its followers, it is not a religion, but a fusion of philosophy, religion and science. It aims to study and understand the universe, not only scientifically, but also morally and ethically. It believes in an eternal and all powerful God (much like Christianity), spirits and a spirit-hierarchy dictated by incarnations (much like Hinduism). The moral codes are equivalent to that of Jesus Christ, despite Spiritism not being an Abrahamic religion.

The one thing that makes Spiritism in Brazil so interesting is the belief that people can communicate with spirits, and they are part of our day-to-day life. Spiritists tend to always be open and excited to show you their religion and point of view, and if you’re curious, you should definitely try to visit a centro espírita (place where Spiritism is practiced). Oh, but do learn Portuguese! Otherwise, it’ll be tough to keep up!

Candomblé was born out of the combination of several local African deities. It was also heavily influenced by Catholicism because, for a long time, practicing any African religion in Brazil was a crime. You can learn more about candomblé and its beliefs in this Dica.

But what about umbanda? That’s a funny story, actually! Umbanda has its roots in African religions as well, more specifically in Angola. And it has another system of belief tied to it: quimbanda. The idea is that while one concerns itself with good spirits and good deeds, the other leans into “dark magic”. But which is which?

Originally, quimbanda was the “good” one and umbanda was the “bad” one. But when slaves were brought to Brazil, they switched the terms in order to fool Portuguese colonizers. So that way they could tell their masters they were practicing quimbanda, when they were, in fact, cursing them through umbanda. For that reason, nowadays, those two are reverted, with quimbanda being the one associated with the dark, whereas umbanda is the light.

The main religion in Rio de Janeiro is, much like the rest of Brazil, Catholicism. But, as we mentioned before, Protestantism has gained a lot of space in Rio, yet that doesn’t mean that’s all there is. In Rio de Janeiro, you can find mosques in Vila Isabel, synagogues in Copacabana and several other places of worship. It is an extremely diverse city when it comes to religion. Whether you’re Hindu, Mormon, or Jewish – you’re welcome here! And you can always find people who share your faith.

That’s it, my friends! We’ve studied a little bit about Brazil and our religions. Are you a religious person? What is your religion?

See you in the next Dica!
Bye bye