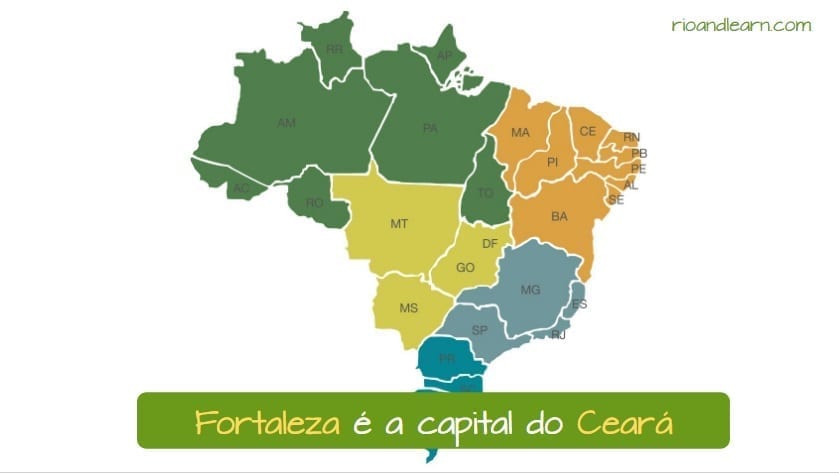 What’s up, all good? Well, in our Dica for foreigners today, we will talk about the different regions of Brazil. No…it’s not a Geography class. It is still a Portuguese class. But you will learn a bit more about Brazil states, and not only Rio de Janeiro, ok? Today we’ll learn about the richest, the largest, the poorest, and the smallest states in Brazil.

The States of Brazil

The North Region has seven states and corresponds to just over 45% of the Brazilian territory. The most important economic activities in the region are mineral and vegetal extraction, agriculture and livestock, and industrial activities.

You probably already know this: the Amazon Forest is located in this region, as well as the largest hydro-graphic basin in the world, the Amazon River Basin. In the north the climate is humid equatorial, traditionally with defined rains and great humidity. An incredible region for you to venture into nature!

This is the second most populous region in Brazil. Tourism is one of the strongest and most important activities in the Northeastern economy. Mining and agricultural activities are also carried out in the region. The landscape here is Caatinga, Atlantic Forest and a bit of Cerrado.

The predominant climate is semiarid, much of this region suffers from a lack of rain which hinders development and everyday life. One of the most incredible things you will find here are the stunning beaches!

There are nine states in the Northeast. It’s the Brazilian region with the greatest number of states even though it’s not the largest region. Here you can find the smallest state in Brazil: Sergipe.

The country’s capital, Brasília, is located in this region. The economy is based mainly on agriculture and livestock, being responsible for some of the country’s largest exports, such as soybeans. Tourism is also important in this region, due to Chapada dos Veadeiros and Chapada dos Guimarães, which attract many adventurers and nature lovers.

The Southern Region is the one that is most different from the other regions of the country, due to its colonization mainly by Germans and Italians. The economic activity here is based on plant extraction and also on agriculture. This region has the second highest national GDP.

Because of its location, below the tropics, this region that has well-defined seasons. Winters really have low temperatures and rain is distributed evenly throughout the year. It is the coldest region of Brazil, where it is sometimes even possible to see snow :O!

Last but not least, let’s learn about the southeast region. The region in which you’ll find Rio de Janeiro!

Now we arrived in our region of Brazil, where our school is located! It is one of the regions that attracts most internal migrants looking for better opportunities and quality of life and also attracts many tourists. Its GDP corresponds to more than half of the national GDP.

The economy is based on the industrial, financial and commercial sector, with tourism also playing it’s part. The state of Rio de Janeiro attracts millions of tourists throughout the year. The predominant climates are tropical and tropical altitude. The landscape here is Atlantic Forest and there are strips of Cerrado and Caatinga. Now that you know the names of states in Brazil, come here and have Portuguese classes with us and get to know the marvelous city!

In the Southeast you can find the wealthiest states in Brazil.

Did you know that Brazil is the 5th largest country in the world? Really big, isn’t it? The country is so big, that it’s hard to memorize all the 26 states of Brazil.
Well, that’s it, now you know a lot about Brazil’s states and cities! Thank you very much, all of you. We will be waiting for all of you, here in Rio de Janeiro, to come and visit our school and learn Portuguese with us while having fun, ok?