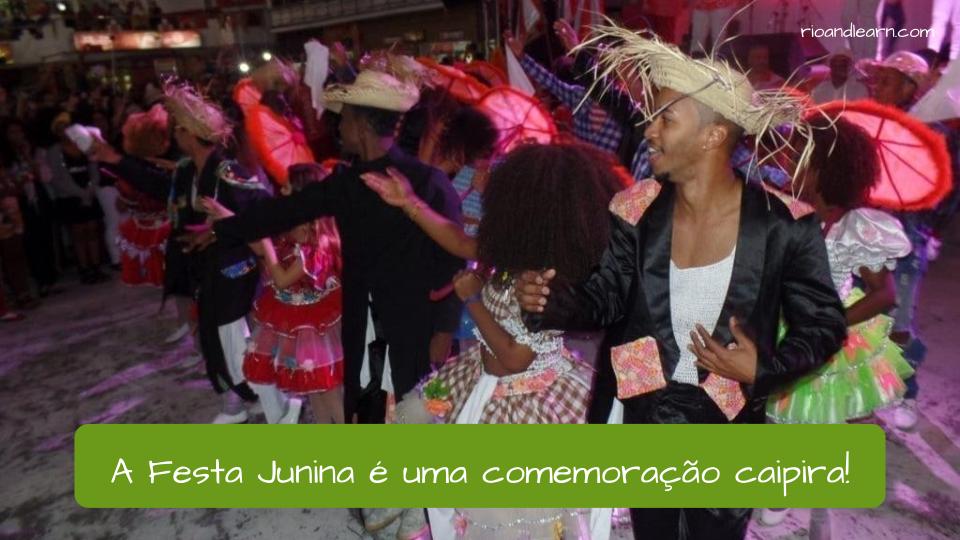 Hi everyone, how are you doing? In today’s class, we will talk about a culture that is extremely present and precious to Brazil. So, before we start, what do you already know about the Brazilian Caipira? Most of you must have heard something about it before, after all, it is a culture that influences many aspects of our country, from music to cuisine and fashion! Let’s talk about a group of people with a specific lifestyle and a unique caipira accent of their own.

If you don’t know much, don’t worry! In today’s Dica, we will learn many things about the history and origin of this group, to aspects of their culture, such as their influence on Brazilian cuisine. We will also take the opportunity to learn Portuguese using some expressions and vocabularies that are famous because of the caipira people. Are you ready?

The Origins of the Brazilian Caipira

There is an essential factor that we must consider to understand better the origins and history of the Caipira people: the Bandeirantes. Before Brazil became official as the country we know today, divided into twenty-six states and the Federal District, it underwent many transformations and territorial divisions. During the colonial period, still in the mid-16th century, a group of explorers and warriors called Bandeirantes formed various expeditions. The primary purpose was to penetrate even further into Brazilian territory.

The Bandeirantes’ motivations were several; they desired to expand and conquer more and more territories. The Bandeirantes would explore the country, to found cities, and look for indigenous people. Some of them would capture indigenous to enslave them or seek Christianizing them. Still, mainly, would explore the magnitude of Brazil’s land in a constant search for gold, silver, and other mineral riches.

The precedence of the Bandeirantes is hugely diverse. There were descendants of Portuguese, Galician, Castilian, and many others. Nonetheless, over time, the groups started to miscegenate even more. That was because the Europeans would have offspring from the native indigenous or the afro descendants. Those arrived in Brazil as enslaved people (mainly from the countries of Angola or Mozambique in Africa).

In the troops, who received the name of Bandeiras, there were many indigenous people (both indigenous enslaved people and indigenous allies) and caboclos (an expression we use to designate children of indigenous with Europeans). When the Bandeirantes entered the territory, conquering and founding cities, they guaranteed the expansion of the domain and ended up propagating and disseminating their culture in those regions.

Settling in the Territory

But where do the Brazilian Caipira enter this story, and what is their relationship with the Bandeirantes? That’s what we’re going to explain now. Over the years, with these various and various expeditions, many pioneers began a process of abandoning the nomadic life so striking of the Bandeiras, and began to settle in the conquered territories.

It is challenging to cite all the possible reasons that led some Bandeirantes to abandon the nomadic life and settle in small villages on a more permanent basis. They began to develop what in Portuguese we call roça. The roça is a piece of land that the worker would cut down all the typical vegetation and turn into a land where he will plant and produce the agriculture products he wants.

That portion of Bandeirantes that settle in the opposite direction of the big cities, more in the interior, and away from the urbanization, was the people who started to receive the name of Caipira. Indeed, the very origin of the word comes from the Tupi language, whose translation means the inhabitants of the countryside.

Where the Brazilian Caipira Live

The term is used to refer to the population that lives in the interior of the states of São Paulo, Paraná, Mato Grosso do Sul, Goiás and Mato Grosso. As it refers to inhabiting in 5 huge states of Brazil, there is a considerable Brazilian caipira population. But it’s not only about the number, but also the size of the occupied territory and its central location. They have such a strong culture that influences Brazil completely and that is why it is expressive and important to our nation.

In addition to living in the countryside, the Caipira culture is also characterized by the religion of Catholicism. The Caipiras propagate rural customs, which exalt the structure of country life and nature. They have a busy and full routine of agricultural work but appreciate and respect a simpler life. With a strong presence and conviviality with fields, animals, pastures, and plantations, the Caipiras are producers for themselves. There are many similar words (in general offensive) for caipiras, such as jeca, capiau, matuto and others. But, caipiras got a lot of space with their music (that are also known as sertanejos). In general, they form pairs to sing. A very famous pair is formed by the brothers Zezé di Camargo e Luciano, portrayed in the movie Dois Filhos de Francisco.

They are major producers of cassava, beans, and corn, ingredients that are dry and easy to prepare. The choice of these ingredients is related to the Bandeiras’ heritage. They were the type of food that would last the long hours of travel from the time they were a nomadic type of people.

We can assign the rustic kitchen of the Caipiras to the times of their nomadic heritage, something that would be easy to build and rebuild during the journey and with the resources of the land. It is present in their rustic cuisine improvised and adapted tools that compose a functional structure that gives their unique and special flavor. The rustic way of life includes the cloth filter to prepare coffee, the fresh milk directly from the cow and the improvised stoves, mainly the wood stove in a clay structure.

The Caipiras are also highly famous for their production of typical fruit liqueurs and, of course, for the renowned cachaça. By the way, it’s not just a coincidence that the name of our famous drink is caipirinha, as a diminutive of the word caipira! So next time you come to Brazil during a holiday, you for sure need to taste these amazing drinks!

The formation of the caipiras’ accent began with the arrival of the Portuguese colonizers in the sixteenth century. We can say this accent is the product between the Galician-Portuguese, plus the língua geral paulista, which was a mix between Tupi and Portuguese. The Bandeirantes spread this variation of the languages with their nomad lifestyle. Many scholars have said that the caipira accent is fated to die due to the urbanization and globalization. However, this accent has survived through the rural subculture, with music, folk stories and linguistic studies.

Phonetically, the difference between this accent and the standard Brazilian Portuguese revolves mainly around the use of R. The caipira accent is known for exchanging the letter L for the letter R. Let’s see some examples:

That’s it, guys! Do you think you can reproduce the caipira accent on your own?