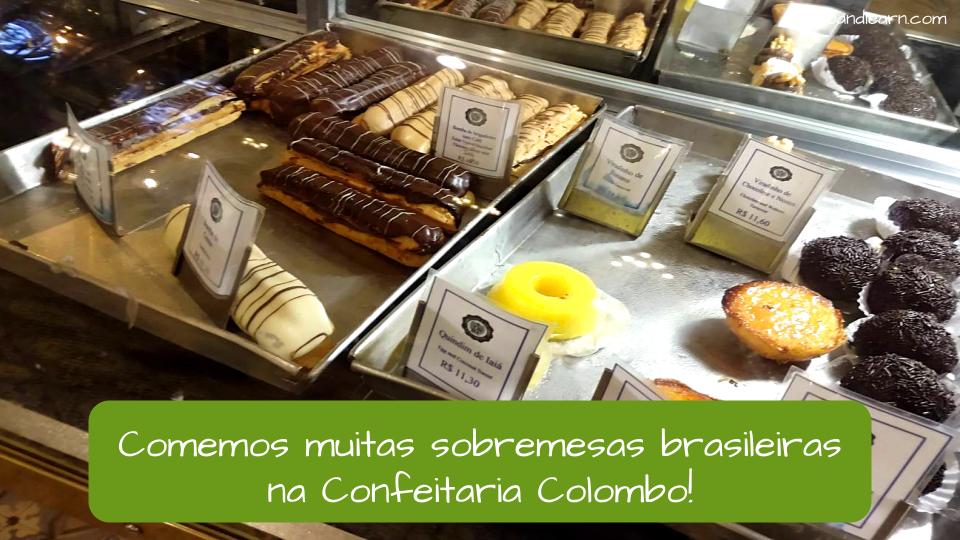 The famous Brigadeiro dessert was invented in Brazil during World War II. Because of the war situation, it was very difficult to get fresh milk and sugar to make sweets. However, someone at that time discovered that the mixture of condensed milk and chocolate resulted in a very tasty treat!

This Brazilian chocolate dessert didn’t have an official name for a while. At the same time, elections for the Brazilian president were taking place, and one of the candidates was Brigadier (Brigadeiro) Eduardo Gomes. Eduardo Gomes used a very funny slogan in his political propaganda: “Vote for Brigadier, who is handsome and single!” (Vote no Brigadeiro que é bonito e solteiro!). His voters named the candy in honor of the candidate, who even used it as a way to raise funds for his campaign.

The Brazilian dessert Brigadeiro is probably the most famous Brazilian dessert ever! It’s really easy to prepare, even for people who are not that used to baking and cooking! If you want to try and make a brigadeiro dessert, check out our Dica about how to make them!

Yes, we have a sweet made of pumpkin and coconut. Exotic, isn’t it? Pumpkin candy, called doce de abóbora in Portuguese, isn’t just a traditional Brazilian treat, but made throughout the entire American continent! Pumpkin is a fruit native to the American continent, important since pre-Columbian civilizations. The origin of the sweet is uncertain, but it has an ancient tradition in the states of Rio Grande do Sul, Rio de Janeiro and Minas Gerais. In addition to pumpkin, the other ingredients used in its preparation are sugar, cloves and cinnamon sticks.

Corn is the basic ingredient of many different recipes in Brazil, and Curau is one of them. It is also called jimbelê or hominy, and is a typical delicacy of Brazilian cuisine of African origin. The term comes from the Kimbundu kanjika. It is a typical dish of the Festas Juninas, and can be found throughout Brazil. With a texture similar to porridge, it incorporates corn, cinnamon, milk and sugar.

Brazilian cuscuz is a dish originating from Berber couscous, and is made from corn, rice or cassava flour. It can be made to taste salty or sweet, depending on the preference of the eater. When it’s made to be a dessert, it looks white, and it’s covered in coconut shavings and LOTS of condensed milk! If you want to check out an amazing recipe for salty cuscuz, click here to read our Dica about how you can cook Brazilian cuscuz!

This Brazilian peanut candy, also called capiroçava, is made from ground peanuts, sugar and salt. Paçoca candy is a very common sweet during the Festa Junina, being one of the most beloved Brazilian sweets.

Paçoca candy was invented during the period of Colonial Brazil. Native peoples had recipes that mixed cassava flour with other ingredients. These recipes were modified by the Portuguese, creating the current combination for paçoca candy, that uses sugar.

This small piece of heaven will get you addicted. Hopefully you are not allergic to peanuts! If you want to learn more about paçoca candy, check out our Dica about it!

Goiabada is a famous dessert in almost all the Portuguese-speaking countries of the world, dating back to the colonial days in Brazil! It is almost a firmer-looking jelly, which is made from guava, being cooked over low heat for several days with lots of sugar.

In Brazil, goiabada is often eaten with Minas cheese. This combination is referred to as Romeu e Julieta. The sweet and salty combination is much loved, especially in the state of Minas Gerais, where it is a very famous dessert!

Bolo de Rolo is another variation that comes from goiabada. This really thin cake is rolled up and stuffed with either goiabada or doce de leite! It’s amazing because it’s the perfect balance between cake dough and filling!

The name pamonha comes from the Tupi word pa’muñã, which means “sticky”. Despite having almost the same ingredients as curau, pamonha has a different form of preparation! Brazilian pamonha is prepared with grated green corn. This resulting mass is mixed with milk, sugar, butter and cinnamon or fennel. The dough is placed in tubes made with corn husks or banana leaves. The pamonhas are cooked until they reach a firm and soft consistency.
Did you know? In Brazil, the word pamonha can be used as an adjective, which means lazy, slow or silly.

Rapadura: It’s Sweet but not Soft! ?

The expression Rapadura é doce mas não é mole (Rapadura is sweet but not soft) says a lot about this typical Brazilian sweet. It’s a sweet in the form of small bricks, with a flavor similar to brown sugar. The rapadura emerged in the 16th century as a way to transport sugar more easily, since it resists temperature variations very well. It arrived in Brazil during colonization, due to the large sugar market that developed here. It is still widely consumed in the Northeast, due to its nutritional value and low price.

Pé de moleque is a typical sweet of Brazilian cuisine, made from a mixture of roasted peanuts and rapadura. It emerged in the 16th century, with the arrival of sugarcane in Brazil. It is very famous throughout Brazil, but is consumed mainly with other sweets during the Festas Juninas. The name can have two origins:
1) Reference to the irregular stone paving present in historic Brazilian cities such as Ouro Preto, which is precisely reminiscent of the irregularity of the candy.
2) Candy sellers who, in order not to be stolen by children, said “- Ask, kid!” (Pede, moleque!).

Tapioca is a pasta made from cassava, very famous in Brazil for being extremely versatile in many different dishes. When made in a skillet, it can be filled with a variety of ingredients, including candy! It’s practical, easy to make, and delicious! If you want to read more about this Brazilian food, check out our Dica about Tapioca!

The inventor was José Ferreira Mendes, a rich man who lived in France to study culinary. When he returned, he created lots of different recipes for sweets, but they never got famous. One day, his daughter Isabelle, while practicing cooking from the notes, decided to add condensed milk and coconut for topping to one sweet in particular. That was exactly what beijinho needed to become a national treasure!

Quindim is a sweet that has as ingredients egg yolk, sugar and grated coconut. It is a variation of a Portuguese recipe called brisa-do-Lis, and demonstrates how the cultures of Brazil and Portugal are intertwined to this day! Usually, the candy has two variations: it can be prepared in the usual size of candy for birthdays, or in a large version called Quindão!

If you want to try an amazing quindim, you can always visit Confeitaria Colombo in our RioLIVE! They have one of the best quindim Rio has to offer!

Cocada is a coconut-based sweet, traditional in various regions of the world, especially in Latin America and Angola. To give different flavors to the cocada, pulp or fruit juices can be added.
Did you know? In Portuguese, when someone is arrogant, we can call them “king/queen of black cocada”.

Cajuzinho is a Brazilian candy made from peanuts, very common at birthday parties. Originally, cajuzinho was made with cashew pulp in the North and Northeast regions. With emigration, the candy arrived in the South and Southeast, and was changed to have peanuts in the composition. The sweetie’s name comes from the fact that, once ready, it is molded into the shape of a cashew, imitating the fruit with a chestnut on top.

Did you know that Arroz Doce is one of those dishes that is popular all over the world? And when I say the whole world, I mean the whole world! From China to Brazil, the sweet made from rice is famous for being simple to make, in addition to being relatively cheap!

Now, let’s see how Brazilian desserts are pronounced in Portuguese. Check out the pronunciation with one of our Rio & Learn teachers, and repeat after it! Can you pronounce Brigadeiro dessert correctly?

Now, besides having the list of Brazilian sweets we have learned, you can also learn the recipe for each of them in the links we prepared for you. You just have to cook them and enjoy while practicing Portuguese.

That’s it, everyone! So, what is your favorite Brazilian candy? What are your thoughts about Brigadeiro dessert and paçoca candy? Will you try some Brazilian Dessert Recipes? Tell us on Twitter! We’ll see each other again on our next Dica!
Bye bye!