Hey folks! Everything good with you? Today we are going to talk about Brazilian Drinks! There are so many Brazilian drinks and beverages and each one of them has a special characteristic. You’ve probably heard about the Caipirinha (our Brazilian lemonade with a twist of alcohol) and other Brazilian cocktails which use the Brazilian spirit Cachaça, but now you’re going to learn more about them and about other drinks we have! We’ll take a look at both non-alcoholic (Brazilian juices, and Brazilian mate tea!) and alcoholic Brazilian drinks! Are you thirsty for a Brazilian juice or a refreshing cocktail? Then join us to learn more about Brazil’s national drinks!

Let’s start off with a list of Brazilian drinks that are non-alcoholic, for those of you who like to maintain a healthy body 😉 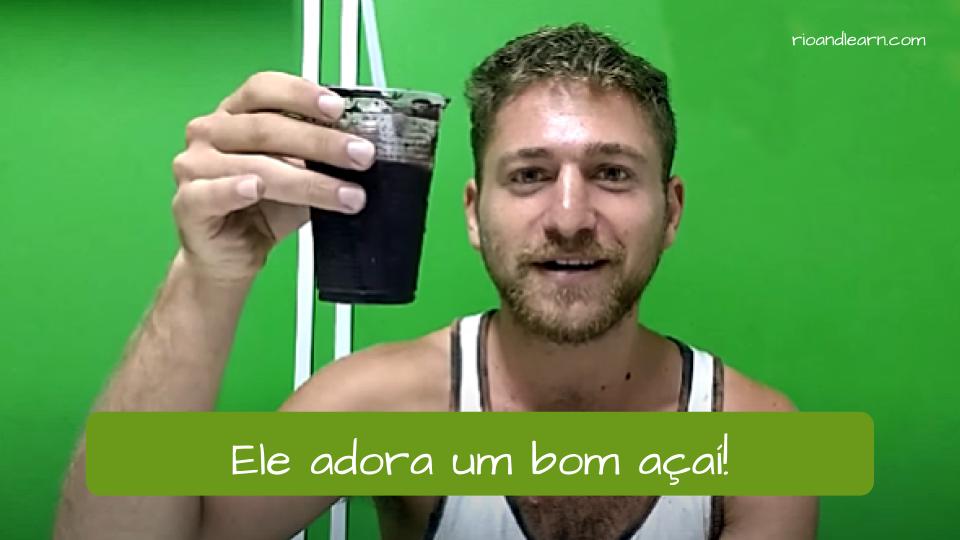 This drink is loved by many tourists that come to Brazil and by Brazilians themselves. Açaí is known as an energy drink, purple in color and full of antioxidants. Açaí is a fruit that comes from the Amazon and can be found in several parts of Brazil. It is prepared in different ways, depending on the region. In Rio, for example, it is consumed cold, like ice cream, and eaten with a spoon. In Belém, however, it is common to eat acai at room temperature accompanied by a fried fish. Açaí could be considered a traditional Brazilian drink! 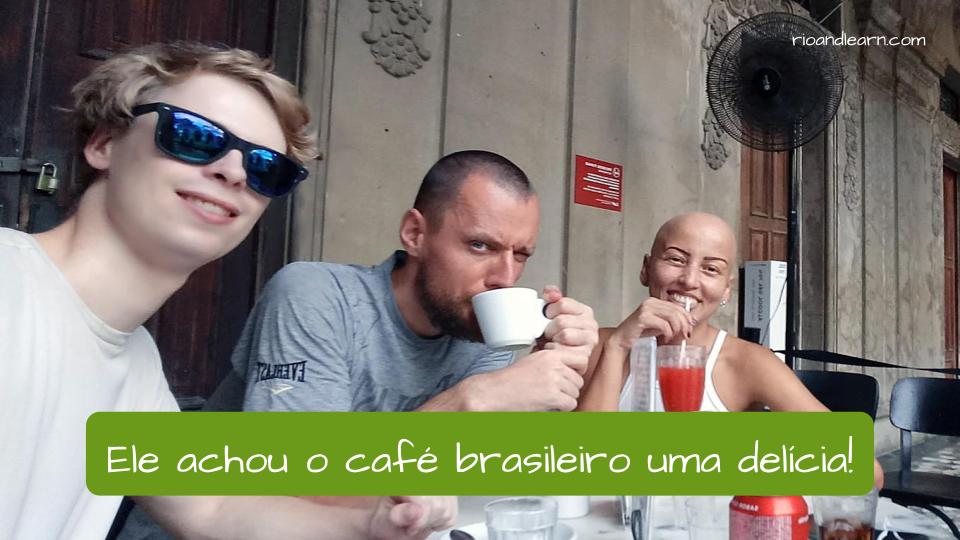 Brazil is world famous for this drink! You’ve certainly heard about the famous Brazilian coffee, and probably already thought you’d like to try it, right? Coffee is very important for Brazilians, there is no café da manhã (breakfast) in Brazil without coffee. If you think about it, even the name café da manhã shows how important this drink is to us. If you’d like to take a look at our dica about how to order a coffee in Brazil, click here! 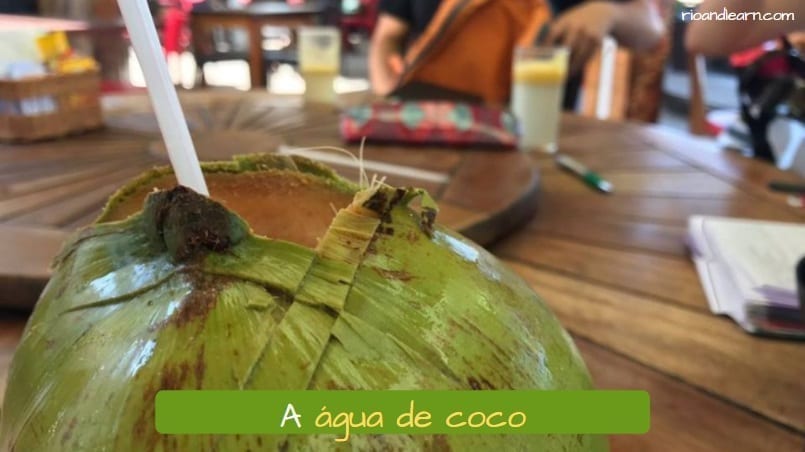 Coconut water is a great choice for those of you who like to relax on the beach or to enjoy after a walk and are thirsty for something ice-cold and sweet. Coconut water is one of the most well loved Brazilian beverages, it helps you stay hydrated and is good for your health as it contains minerals, vitamins and antioxidants. It is easy to find coconut water in almost every kiosk on the beach and also at supermarkets and greengrocers. 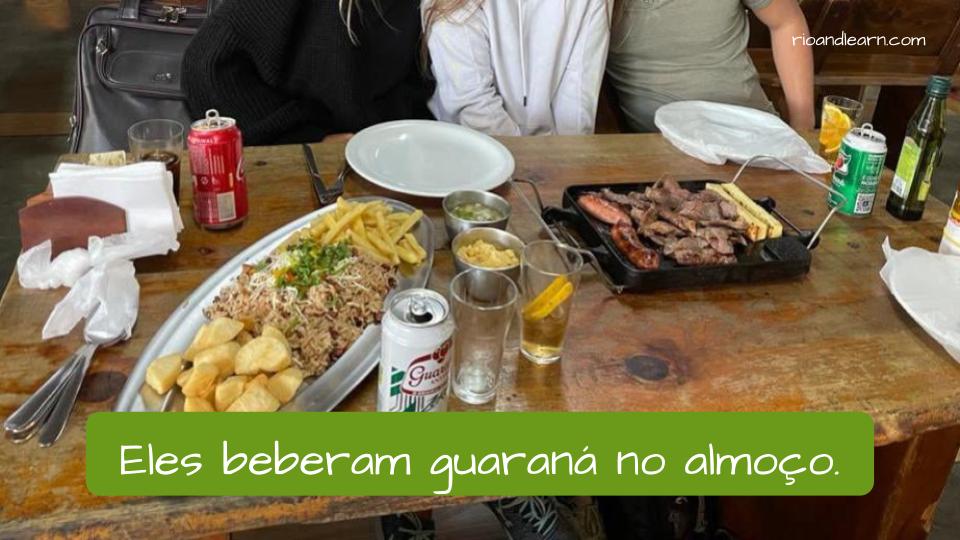 Guaraná is considered the iconic soda of Brazil. If you ask any Brazilian, they will tell you that Guaraná is one of Brazil’s national drinks! It is made from the fruit of Guaraná, which comes from the Amazon, and it is known in various parts of Latin America. There are numerous brands that sell Guarana, such as Antarctica, Kuat and Fanta, and it is super easy to find at any supermarket, bar, restaurant and beach kiosk in Brazil. This is a nice non-alcoholic Brazilian drink to have with a few friends! 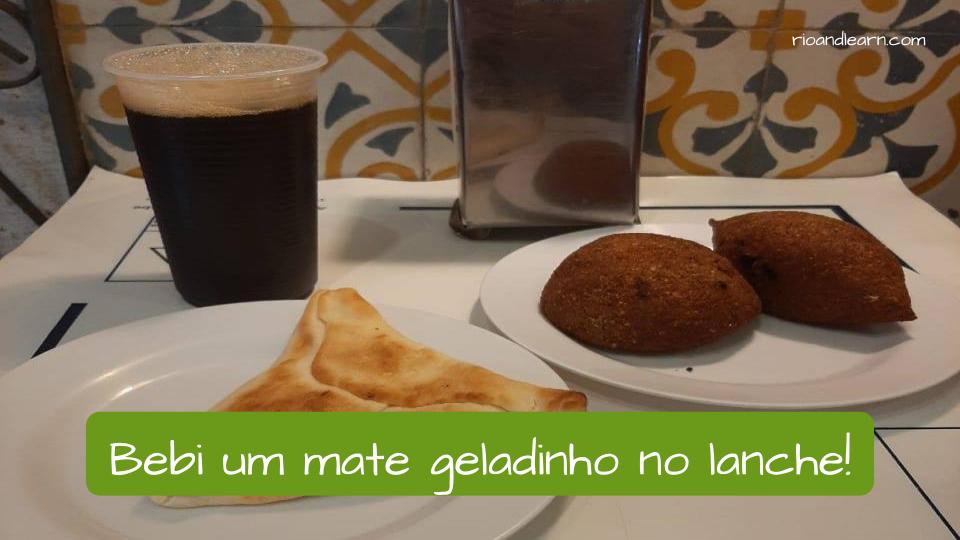 The Chimarrão is a drink made from leaves, similar to tea, extremely popular in Rio Grande do Sul. The gaúchos (name given to the Rio Grande do Sul natives), usually drink Chimarrão in a special cup, often made from a gourd, with a metal straw, hot water and ground yerba mate. Chimarrão was consumed a lot by indigenous cultures in the past and, nowadays, there are fans of this drink all over Brazil. This famous Brazilian tea also has a commercial iced version very popular, especially at the the beach: the Brazilian mate tea!

Cajuína is a typical beverage from Piauí, a state in Northeast Brazil. As the name says, it is made from the Cashew Fruit (Caju in Portuguese), a very common fruit in the state. It is a non-alcoholic beverage that was invented by a pharmacist who wanted to find a remedy for alcoholism. Cajuína is served ice-cold and it is quite refreshing. 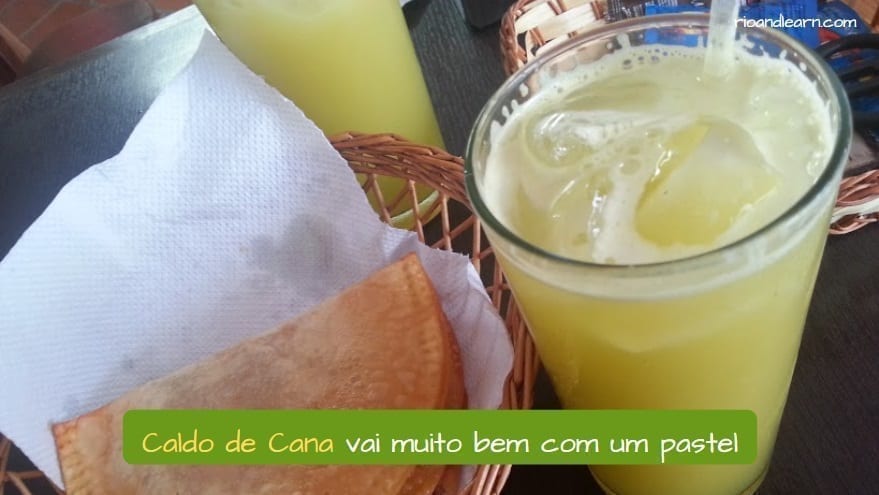 If you like street food, then don’t miss out trying the famous caldo de cana. It is a juice extracted from sugar cane (which is also used as a basis for cachaça) and it is very common to drink accompanied by a fried pastel (stuffed savory pastry). It is a great option on a hot summer’s day since it is served extremely cold and boosts your energy levels. 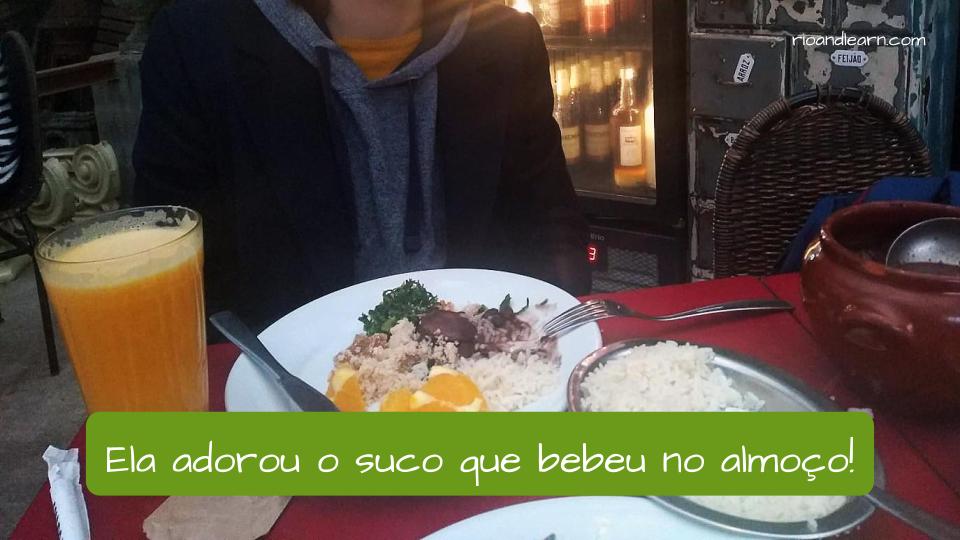 We have so many Brazilian Juices! Brazil is very famous worldwide for its variety of fruits, so we have every imaginable type of juice (and many unimaginable!) From the most common fruits, such as oranges and passion fruit, to the most unusual ones, such as acerola and jabuticaba. Brazilian juices are delicious, healthy and super nutritious!

Now we will see the most popular Brazilian alcoholic drinks. Brazilian alcohol is very famous in other countries, even more because we love to mix it with fruits! Let’s take a look at some of them! 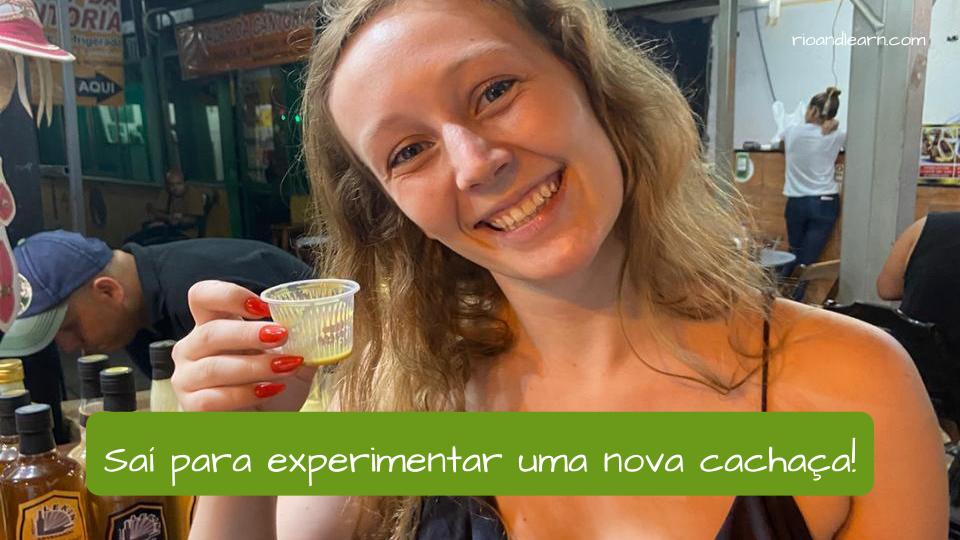 Cachaça is considered to be one of the most famous alcoholic beverages in Brazil! The liquor is extracted from sugar cane, and it is used in several other alcoholic beverages, such as Brazilian caipirinhas. African slaves were some of the pioneers of Cachaça and would use the drink as a source of energy on a hard day at work. The drink has become so famous today that there is even a National Cachaça Day: September 13th! Also, did you know cachaça has a nickname? This Brazilian drink is also affectionately called pinga. 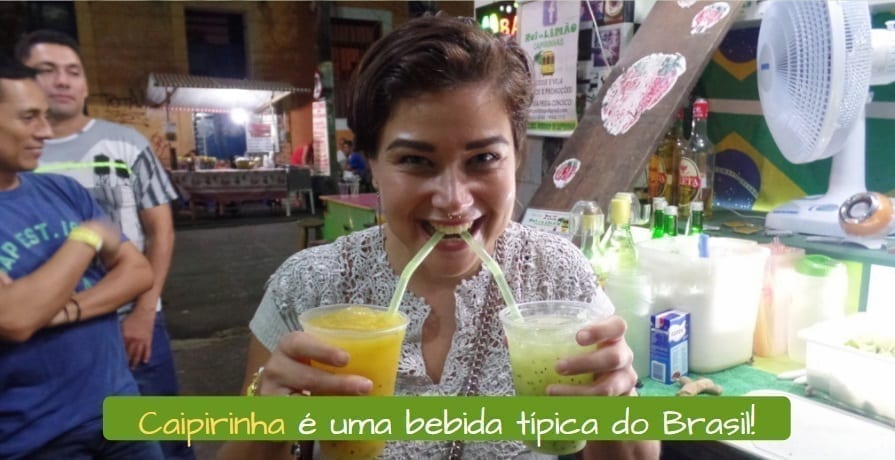 Who has never heard of it? This Brazilian lime drink is one of the symbols of Brazilian culture, you could call it our Brazilian national drink! And it is impossible to come to Brazil and not try one. Brazilian caipirinha is an alcoholic cocktail, made with cachaça, limes, sugar and ice (and no mixer!), it is perfect for drinking at a bar with friends. Traditionally the fruit used in a caipirinha is lime, but you will find different fruit also offered for your caipirinhas. You want proof? Come with us on our Lapa RioLIVE! to try Brazil’s national cocktail! 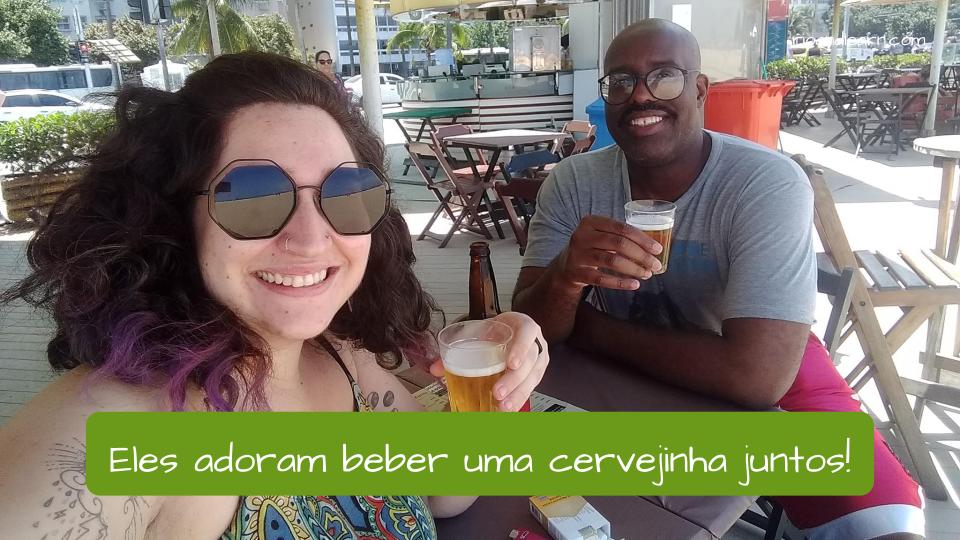 Beer is one of the most consumed alcoholic beverages in Brazil. Brazilians love to go out with friends to drink a very, very cold beer on a hot day! The most popular type of beer in Brazil is lager beer, but we have all types for all tastes! 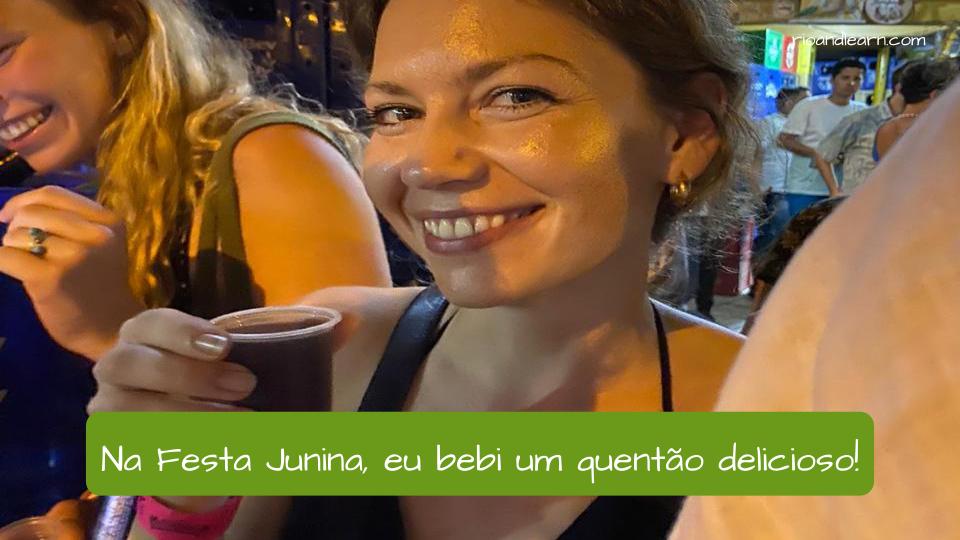 Quentão is a very popular and often drunk at Festas Juninas. It is a cocktail made with cachaça, water, sugar, orange peels, lemon, cinnamon, cloves and cut-up apples. Served hot, it has become a popular drink for the winter time in Brazil! 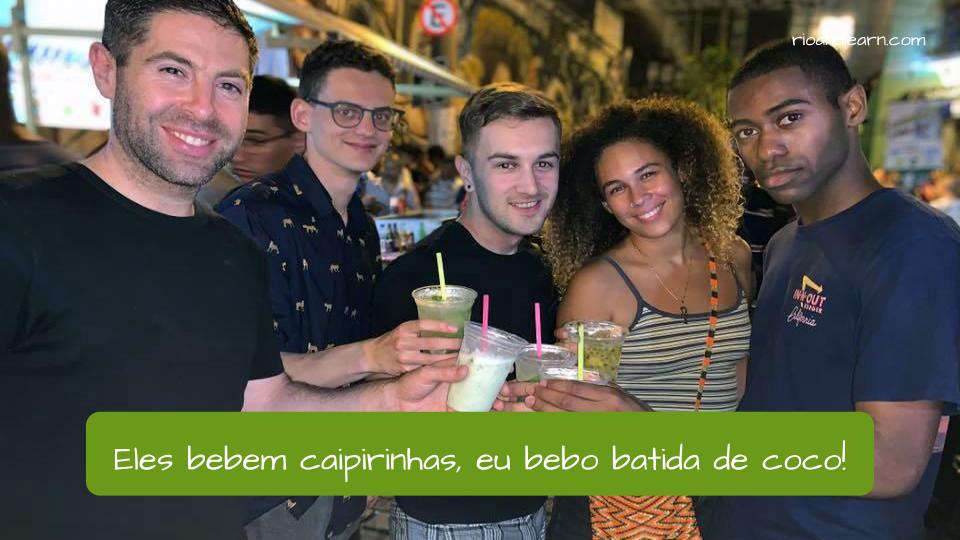 The batida is a creamy drink, usually very sweet and delicious. It may or may not contain alcohol: you can make it just by beating together the ingredients like fruit and condensed milk but very often includes alcohol like vodka or cachaça.

A drink brand that has become so famous it even makes appearances on Brazilian funk tracks, Catuaba is very similar to wine. But we must be careful because it is strong. Some say that Catuaba is an aphrodisiac so it’s best not to drink it in large quantities! 😛

What do you think about the Brazilian beverages? From our traditional Brazilian drink cachaça, to our famous Brazilian juices, our country somewhere you can be certain to have fun tasting new drinks! Are you surprised to know Brazilian’s don’t usually drink rum as other tropical countries do? Or that Brazilians cleverly found many different ways to drink the product of the sugar cane both alcoholic and non-alcoholic? You know by now Brazil is always full of surprises!

We hope you enjoyed this Dica, see you in the next one!
Hugs from Rio & Learn.