Hello friends! Brazilian music is a very large mixture of rhythms and genres, a gift from our cultural miscegenation that has taken place since Brazil was discovered by Portugal. Therefore, today we are going to talk about Brazilian instruments! Did you know that many cultural representations are dependent on music? Brazilian musical instruments are seen in various cultural expressions such as capoeira (like the famous capoeira music instrument berimbau, and the capoeira drums), maracatu and the famous Carnaval. The percussion is also very present, so it’s easy to find Brazilian drums when you go to a batucada! Much of maracatu is based on this musical instruments as well, like the Brazilian tambourine and the instrument cuica. Some are also important when we are talking about Brazilian samba: drums and cavaquinho are a must to good samba music. Let’s learn more about these traditional musical instruments in Portuguese, but also some classical instruments that are more common in other countries!

The Musical Instruments in Portuguese

We have listed below some classical instruments that most countries have, but also some characteristic Brazilian instruments that you can only find here and in a few other places! Let’s take a look!

The Story Behind Some Brazilian Instruments 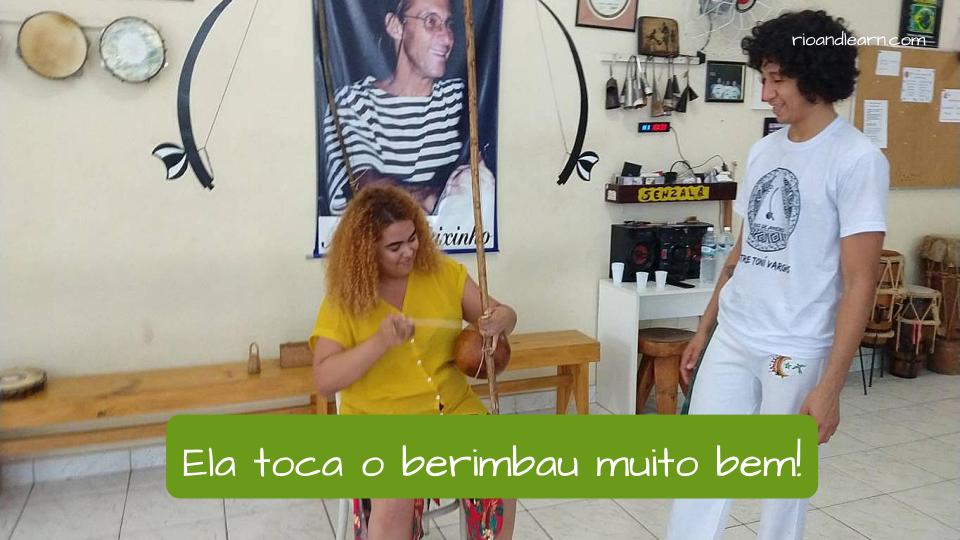 Berimbau: the star in Capoeira

The berimbau, like the reco-reco, originated in Angola. This instrument was taken by Angolan slaves to Brazil, where it started to be used in capoeira. Today, berimbau is the star from the Brazilian capoeira instruments.

Also known as repinique, the repique is a Brazilian percussion instrument used mainly in samba. It is also widely used in solos, such as samba introductions and drumming. This is the traditional Brazilian samba drums! Repique can also be found being used as one of the maracatu instruments.

Brought to the Portuguese during the colonization of Brazil, the cavaquinho, as it is popularly known, is one of the most important traditional Brazilian instruments in our culture. It is mainly present in the rhythms of samba and pagode. The cavaquinho is a star during Samba Day!

Reco-reco: The Mix Between Brazil and Angola

Originally, this wooden instrument came from Angola. But in Brazil it is mostly seen in the metal format, and is widely used in the genre of pagode and samba. Reco-reco can also be found in capoeira roda, which makes it one of the many capoeira music instruments.

Agogô: one of Capoeira Instruments

The agogô is also of African origin. It has a metallic appearance, and consists of two metal bells, struck by a rod of the same metal. The metal agogô is used in dances of African origin, in religious meetings of Candomblé, and is also one of the well-known capoeira musical instruments.

Atabaque is part of the Brazilian percussion. The name is of Arabic origin – at-tabaq, or “dish”. This traditional Brazilian instrument is composed of a cylindrical drum, with one mouth covered in leather. To play it, people use their hands or drumsticks. Can be used as a capoeira drum; in batucada, it acts like drums; and it’s a sacred instrument for Candomblé religion.

A Cuíca: the Maracatu Darling!

The Brazilian instrument cuíca is a very important instrument in Brazilian culture, especially in traditional folk festivals. Like other percussion instruments, it is widely used as one of Maracatu musical instruments.

Let’s Dive in the Pronunciation

Repeat after each instrument! Let’s make this pronunciation as perfect as brazilian drum music!

So what do you think about the musical instruments in Portuguese? Now you know all the Brazilian wind instruments, deeply related to the world-wide known genres of samba and pagode! Even the capoeira instruments like berimbau! Any of them made you want to learn how to play them?