Hi guys, how are you all doing? Brazil is a country well known for its unique cuisine, which mixes European, indigenous and African influences. With so many different flavors and blends, Brazilian food brings many options for every taste, from snacks to elaborate meals. Today, we are going to focus on Brazilian typical food! It goes well beyond feijoada and pão de queijo! So, get ready to feel hungry by the end of this Dica and let’s check out some Brazilian dishes! 😛

A Little About Typical Brazilian Food

We all know that Brazil is a cultural mosaic, with different cultures, customs, music, and of course, food. Brazilian food is the result of a mixture of European, indigenous and African ingredients. Many of the components of the recipes and preparation techniques are of indigenous origin, having undergone modifications by the Portuguese and slaves from Africa. These adaptations were made from their own typical dishes, replacing the missing ingredients with local counterparts. We are going to take a look at some mouth watering food options we have considered typical Brazilian food! Churrasco is a typical Brazilian meal which is really common at the southern region of Brazil. There’s no way to deny the fact that there isn’t a better churrasco in Brazil than the one from Rio Grande do Sul – at least not according to the gaúchos (name given to natives from Rio Grande do Sul). For gaúchos, the best side dish for a piece of meat is crunchy cassava flour. It is quite common to find churrascarias (steakhouses) in Porto Alegre that serve various types of meat à la carte, seasoned with nothing but salt to ensure the steak is tender and tasty, not to mention juicy; the more traditional churrascarias don’ appreciate the all-you-can-eat bbq restaurants (rodízio) with a salad buffet.

Tucupi is a broth extracted from the root of the yellow manioc, which needs to be boiled long enough to lose its poisonous hydrocyanic acid. In the last stage, simply add endives, basil and salt. Tucupi is served with a strange gloopy manioc gum, dried shrimp, chili pepper and jambu leaves. It’s a common street food in the Northern region of Brazil, and it’s a very unique addition to the Brazilian cuisine. Found on menus all over the country, the Feijoada is most commonly served in the city of  Rio de Janeiro, the place where the term feijoada was originally coined, according to records. The cooked beans generate a consistent and tasty stew, mixed with dry meat (carne-seca), sausage, loin and ribs, as well as feet, ears and tails of pork. The dish is served with white rice, orange slices, sautéed collard greens, pork crackling and, in some places, it can be served with deep fried banana and sausage. The process is long: the salty meats must be neutralized (desalted); feijoada generally needs to start being prepared the night before. A drink that must accompany a delicious feijoada is certainly a refreshing caipirinha.

The Goiânia cuisine, in the Midwest region of the country, is very similar to the cuisine of Minas Gerais (the home of pão de queijo), but with its peculiarities. The pequi is a typical fruit from the Brazilian cerrado that was cultivated by natives long ago. The fruit came to be recognized later when found by the Bandeirantes (Portuguese explorers and fortune hunters who searched the Brazilian forests) and slaves during the period of Colonial Brazil. One of the most typical ways of preparing pequi is to cook it with rice. It has a yellowish color with a very characteristic smell and taste. Care must be taken when eating the pequi, don’t ever bite into it! The stone in the center of the fruit has big spines which will hurt your mouth; to prevent this, simply scrape the pulp of the pit. 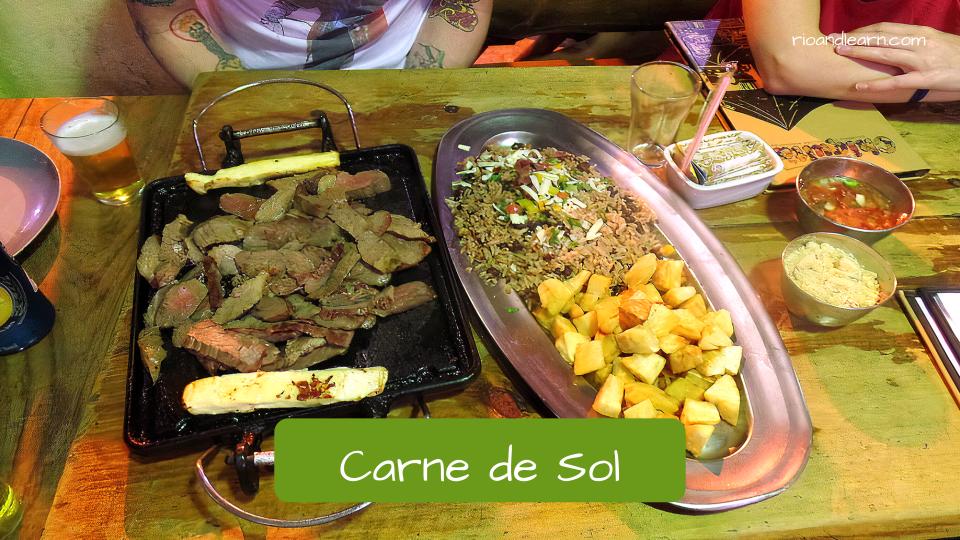 Carne de sol is typically from the Northeastern region. A feast of meat, which traditionally would be dried and salted for preservation and then later rehydrated, is served with with a side of beans, fried macaxeira (which is the northeastern word for white manioc/ cassava /yucca), farofa d’água (northeastern style toasted manioc flour), pirão de leite and a vinaigrette. Despite the name “carne de sol”, the meat does not dry in the sun, it is salted and left few a few hours and then left to soak in a bowl of cold water in the refrigerator; if the meat was allowed to continue drying it would dehydrate, making it the famous dried-meat, or ‘carne seca’. If your mouth is watering and your taste buds got you craving this delicious meat of the sun, then come with us on our RioLIVE! at the Feira de São Cristóvão. 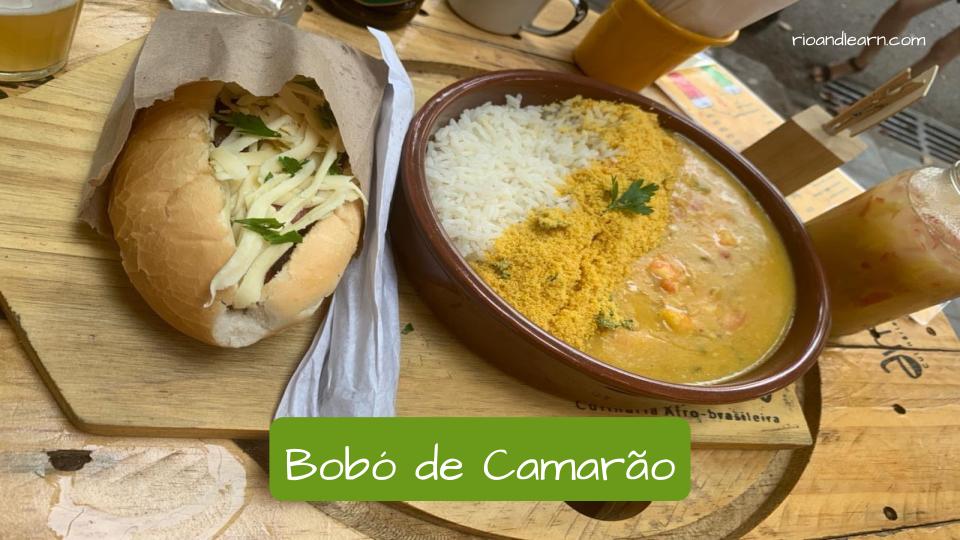 Bobó, as it’s also known, is a typical dish from the African cuisine with a Brazilian touch. To prepare it we need braised shrimp, green herbs and coconut milk. These ingredients are mixed into pureed manioc, and it’s possible to add Brazilian red palm oil (dendê) for richness if you want, ginger and also dried shrimp. It’s perfect to eat it with rice, but there are some people that prefer pirão. 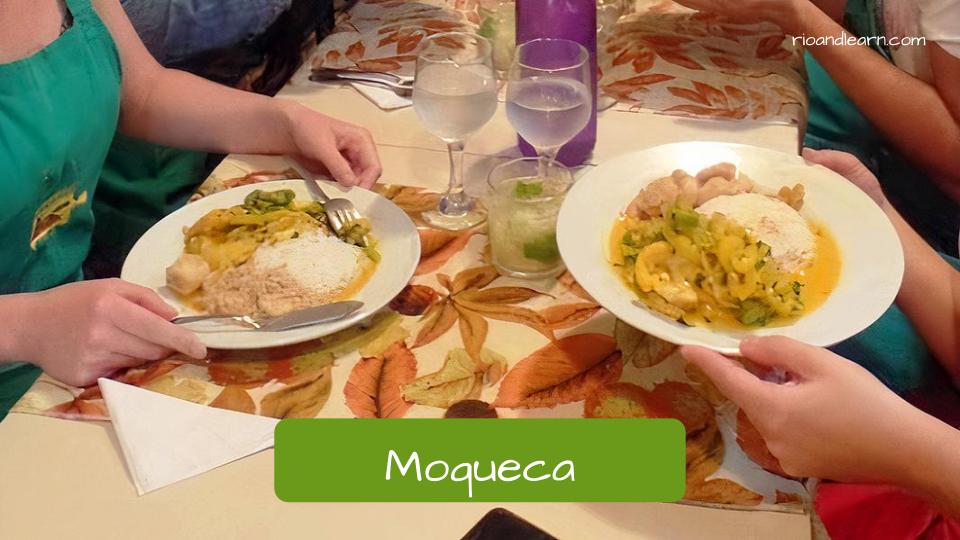 Moqueca, or muqueca (comes from quimbundo, mu’keka, and means fish stew) or from tupi language poqueca (pokeka, which means to wrap). It’s a favourite typical Brazilian dish and it’s also found in Angola. In Brazil, it’s most commonly found in Bahia, Espírito Santo (moqueca capixaba) Pará and Pernambuco. Depending on the region, it can be prepared with chicken, fish or seafood, tomatoes, onions, coconut milk and cilantro. Some vegetarian versions of the dish have been created, substituting fish with delicious plantain, jack fruit, cashews, mushroom, eggplant, tofu, etc. In other words, it’s a dish for all tastes.

Acarajé is a delicacy typically from the Brazilian and Afro-Brazilian cuisine. It’s a fried dough made of feijão-fradinho, onion and salt. Once the dough is prepared, it’s fried in Brazilian red palm oil. It’s usually eaten with a loooot of homemade chili sauce on it, just like baianos do. Would you like to try it?

Complete the recipe below with the verbs we have selected in infinitive! No need to conjugate!

That’s it guys! Is your mouth watering? If you ever come to study Portuguese in Brazil with us, our teachers will be really happy to show you around some amazing places for you to try this delicious Brazilian cuisine!

Hope to see you here!
Bye-bye!