Brazilians never give up 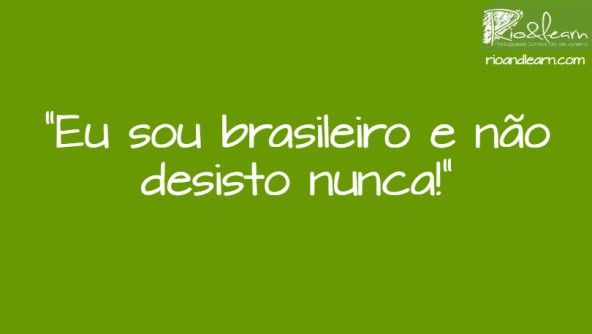 Hello guys! Are you also excited about the Olympic games?
Today we’ll have the third Dica of our Olympic series. We have learned the names of the sports in Portuguese and the story of the great Oscar Schmidt. On today’s Dica we’ll learn that Brazilians never give up!

Have you heard any brazilian friend say the phrase “I am brazilian and I never give up!”?
The name Vanderlei Cordeiro de Lima rings a bell?

Vanderlei is a former marathon runner from Brazil that won the Pan-american games twice. The dude ran on three Olympic Games. One in Atlanta, one in Sidney and the most important one in Athens. During the Olympic Games in Athens, while he was running the 42 kilometers marathon with the gold medal almost on his chest he was pushed out of the track by an spectator.

Moment in which Vanderlei is pushed

Vanderlei, despite being exhausted, did not let that fase him, because he is brazilian, and brazilians never give up. He got his head up, took a deep breath, even before understanding what happened, and kept running and believe it or not he finnished the Marathon in third place. Guys! He brought the bronze back home and assured his Olympic medal! How awesome is that?!

Moment in which Vanderlei crosses the finish line

Reporter 1: …a brazilian warrior! Bringing one more medal to Brazil. Bringing the 10th medal to Brazil. in the Olympic games of Athens. Vanderlei Cordeiro de Lima puts Cruzeiro do Oeste on the world map! The city from Paraná that celebrates this bronze medal. Brazil is bron…

On account of his attitude and sportsmanship spirit, during the closing ceremony, Vanderlei was awarded the Pierre de Coubertin Medal. After that, the famous phrase “Eu sou Brasileiro, e não desisto nunca” caught on and till this day it can be heard all over Brazil.

So, what did you guys think?
Next Tuesday we will have another Dica about the Olympic games. Do not miss it!