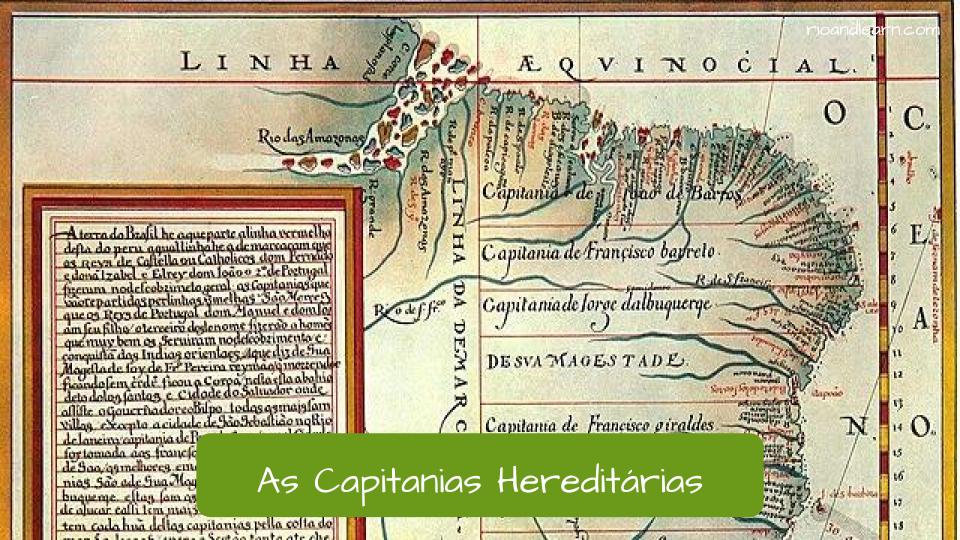 Hello, galera! How are you guys doing? Today our Portuguese class will help you learn a little bit of history. We are going to study the Captaincies of Brazil.

But this imaginary line passed right through the middle of what we know today as Brazil! That’s why the map of that time can look so different. After the Treaty of Tordesillas, the hereditary captaincy system was the first form of organization in the Brazilian territory.

The Hereditary Captaincies of Brazil

The Captaincies of Brazil were a system of territorial administration created in 1534 by the king of Portugal, D. João III. They were originally called Capitanias Hereditárias (Hereditary Captaincies). This is because they used to be passed from father to son.

The system involved dividing the territory and giving them to specific people to administrate. These administrators were noble people who were well-connected to the Portuguese Crown.

After some unsuccessful divisions, the final map consisted of thirteen captaincies. It’s important to say that Rio de Janeiro is located in what used to be the Captaincy of São Vicente.

Although the Portuguese had organized this system to improve the governing, it wasn’t very effective. Only the Captaincy of Pernambuco and the Captaincy of São Vicente were successful. Most of them didn’t work out well for four main reasons. First, the massive size of each territory. Second, the difficulties of administration. Third, the lack of economic resources. And, finally, the constant attacks by indigenous people. Because of these problems, the captaincies and this system were abolished in 1759 by the Marquis of Pombal.

Based on the text and what you have learned in Portuguese, answer these questions:

How’d you do, friends? With that, we’ll wrap up another Dica. If you want to know more about the Portuguese language and Brazilian history, subscribe to A Dica do Dia for tips. Also, don’t forget to follow our  Youtube Channel and watch our Dicas videos.