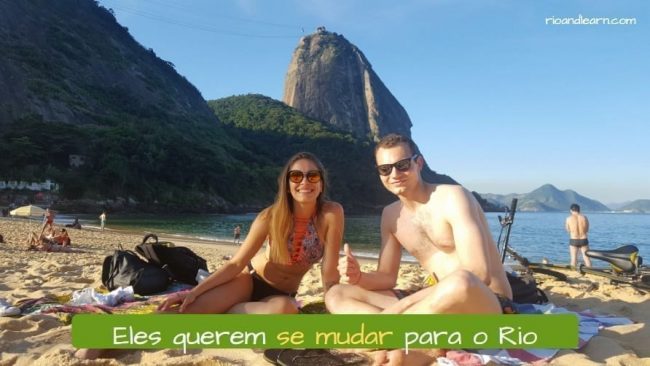 Good morning from Rio de Janeiro! Today we are going to learn the verb to change in Portuguese. This verb is super regular and we’ve highlighted the verb endings in bold so you can see how the regular conjugation is structured. Easy peasy! In addition let’s take a look at how it works in Portuguese and how you can use it in conversation. Let’s learn!

Learn the meaning of the verb to change in Portuguese!

Well, the verb mudar in Portuguese can be used in two different ways, as a reflexive or non reflexive verb.

As a non reflexive verb it can mean to move things to a different place, or when you are leaving one house and settling in another. This verb can also mean to change something in life or to become or/do something different! We don’t use two different verbs (to change and to move), we use the same verb: mudar. This can also be converted into a noun to mean the changing process or the result of something or someone, and we mostly say “mudança”

Oh, and let’s not forget the expression a change of clothes! We have it too! We say: “uma muda de roupas”. Well, sometimes we need it, right? 😉

To change Conjugation in Portuguese

Let’s see how we conjugate mudar in Portuguese:

Examples using the verb to change in Portuguese

O que você mudaria na sua aparência?
What would you change about your appearence?

Vocês podem mudar meu telefone cadastrado?
Can you change my phone number on your files?

The verb to change in Portuguese as a noun

So as a noun we can also use “change in”, “change to”, “undergo a change” and “make a change” and all of them have correspondents in Portuguese using the word mudança. Below are some of the examples of the noun mudança:

Examples using change in Portuguese as a noun

A indústria automobilística passou por enormes mudanças nos últimos 50 anos.
The car industry has been through enormous changes in the last 50 years.

Houve muitas mudanças na cidade desde a última vez que visitei.
There have been many changes in the country since I last visited.

To change in Portuguese = To move

So, as a reflexive verb, the verb mudar-se means to move from a house or apartment to another. Notice that you need to change the reflexive pronoun according to the subject. And also, it’s more common to use the pronoun before the verb. Check it out:

Depois do casamento, vamos nos mudar.
After the wedding, we are going to move.

Se você pudesse, para qual cidade você se mudaria?
If you could, what city would you move to?

That’s it guys! How about you?
Would you like to move to Rio? You could live here in Copacabana, really close to our school.

Before coming, check our Instagram and get to know more about the city.
We’ll meet you here!