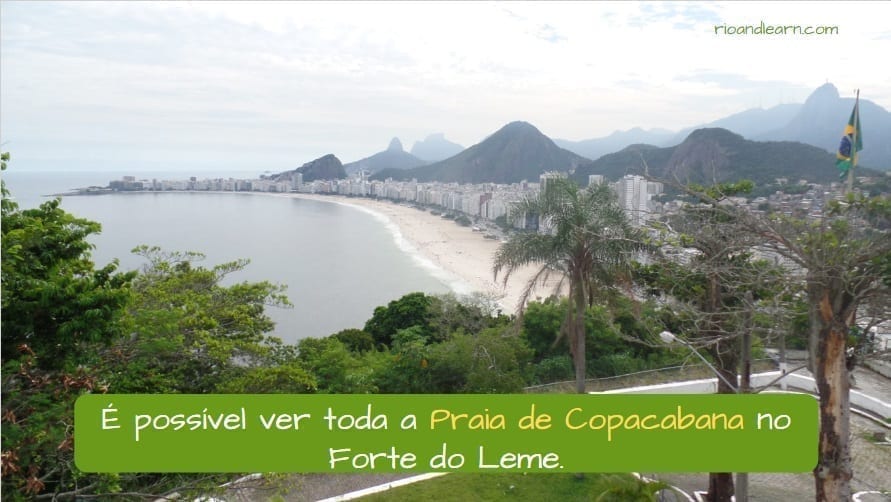 Hi, guys! How is everything? Today we’ll talk about one of the most beautiful places in Rio de Janeiro! We’ll study about Copacabana history. Do you know why the name of this beautiful neighborhood is Copacabana, after all? And why it has a fort and a hotel called Copacabana Palace? Also, what is the history behind the famous Copacabana beach? Let’s dive in the history of the place where our school is located!

Until the end of the 19th century, Copacabana was not easily accessible. Some fishermen lived there and there were some farms, in addition to the church and the Forte do Leme. In 1892, there was the opening of a tunnel, which allowed integration with the rest of the city. Another highlight was the creation and expansion of the tram lines.

In 1922, one of the most important events in Brazil’s history happened. This event was known as Revolta dos 18. It was a military rebellion that aimed to end the old republic and start the new democracy. The soldiers marched all along the beach, from Forte de Copacabana to Forte do Leme. During the march some gave up. In the end, there were only 17 soldiers and one civilian left. That’s the reason of the name Revolta dos 18.

One of the great symbols of the neighborhood is the Copacabana Palace Hotel. It was the first large building in the area, opened in 1923. The Copacabana Palace also housed a casino until 1946, when gambling was banned in the country. The building with a privileged location allows a beautiful view of the beach.

In the beginning, Copacabana beach had a different name. It was called Sacopenapã, from the Tupi language. However, in the 18th century it changed. It was because of the construction of a chapel named Nossa Senhora de Copacabana on a rock, by the end of the beach. Later, the chapel was demolished and Copacabana Fort took place.

There are a couple of versions about the origin of the name Copacabana: one says it means blue beach; the other possibility says that it means view of the lake.

In 1905, work began on Avenida Atlântica, famous for its Copacabana beach broadwalk. The broadwalk was built with stones from Portugal. The design of waves in black and white is still admired around the world today!

As Copacabana beach became very popular in the 20th century, it was necessary to enlarge the space for the sand. This happened for two reasons. First, to have a larger recreation area (for beach volleyball and beach soccer). Second, to prevent the undertow from reaching Nossa Senhora de Copacabana Avenue.

Copacabana beach is one of the most famous beaches in the world (if not the most famous one). It is located in the neighborhood of Copacabana, which is in the South Zone of Rio. Visitors from all over the world come to Rio de Janeiro to visit this beach and drink caipirinha while getting a suntan in a hot day.

Nowadays, Copacabana beach is extremely know for hosting several events in the city of Rio de Janeiro, such as competitions during the 2016 Olympics, international concerts and one of the biggest parties in the world: New Year. On New Year’s, Copacabana beach receives about 2 million people and it is considered one of the main places to celebrate.

The beach restaurants are part of the beach’s commercial area and they attract all kinds of people. It’s very common to see a carioca having a beer or some coconut water while appreciating the landscape.

What about you? Would you stay in Copacabana Palace Hotel? Have you visited Copacabana beach and fort? We have many RioLIVE! activities in Copacabana for you to get to know it! We are waiting for you!