Cosmas and Damian in Brazil 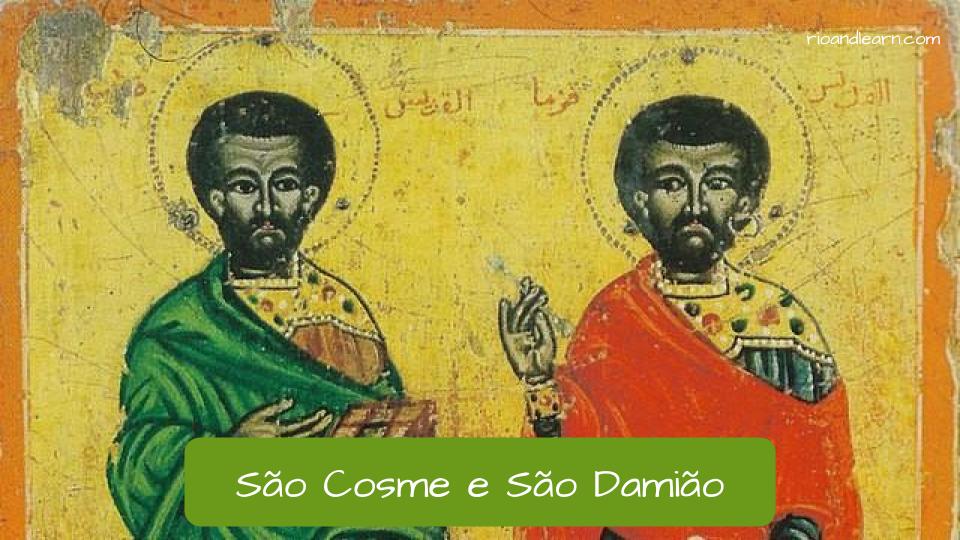 Hi there! Every country has a well-known holiday of its own, right? We all know that the United States celebrates Halloween, and Mexico celebrates Dia de los Muertos. But did you know that Brazil has its own kind of Halloween in September? Come learn more about this religious and interesting day in our culture: Saint Cosmas and Damian Feast Day in Brazil!

The Story of Saint Cosmas and Damian

St. Cosmas and St. Damian were born in the city of Aegea, in Arabia, around the year 260. They were twin brothers, and came from a wealthy, Christian family. They specialized in the sciences and medicine and soon became famous doctors. Due to their Christian upbringing, the brothers decided to practice medicine for free. They believed that this was a way of practicing their religious charity and pleasing God.

At the same time, Emperor Diocletian began a persecution against Christians. Soon, Cosmas and Damian were arrested on charges of witchcraft and spreading a sect forbidden by the emperor. They were taken to court, and were forced to renounce their faith in Jesus Christ and swear loyalty to the Roman gods instead. They refused, and were subsequently sentenced to death. The Romans tried to stone them, shoot arrows, burn them at the stake, and even drown them. However, nothing seemed to kill the brothers. Finally, at the behest of the magistrate, the torturers cut off their heads.

Why do Some People Consider it the Brazilian Halloween?

The cult of Cosme and Damião went through a strong religious syncretism in Brazil, as the two saints also became associated with religions of African origin, such as Candomblé and Umbanda. Despite being perceived by Christians as protectors of doctors, for Candomblé and Umbanda, Cosme and Damião were associated with protective figures for children.

This had a huge impact on Brazilian culture. People who needed help from São Cosme and São Damião (especially in health matters) made promises. In return, to please these saints, they began handing out candy to children free of charge. In other words, a tradition that combines both Christian and African religions and practices! That is why every September 27th, if you are in Brazil, you will see people handling out small bags full of candy for children.

If you want to read more about Brazilian religions, we have just the right Dica for you!

What about you? Would you like to celebrate Saint Cosmas and Damian feast day in Brazil? Well, you can always schedule your immersive classes for September and try to score some candy, even if you are an adult! Learning Portuguese in Brazil can be fun and sweet as chocolate!