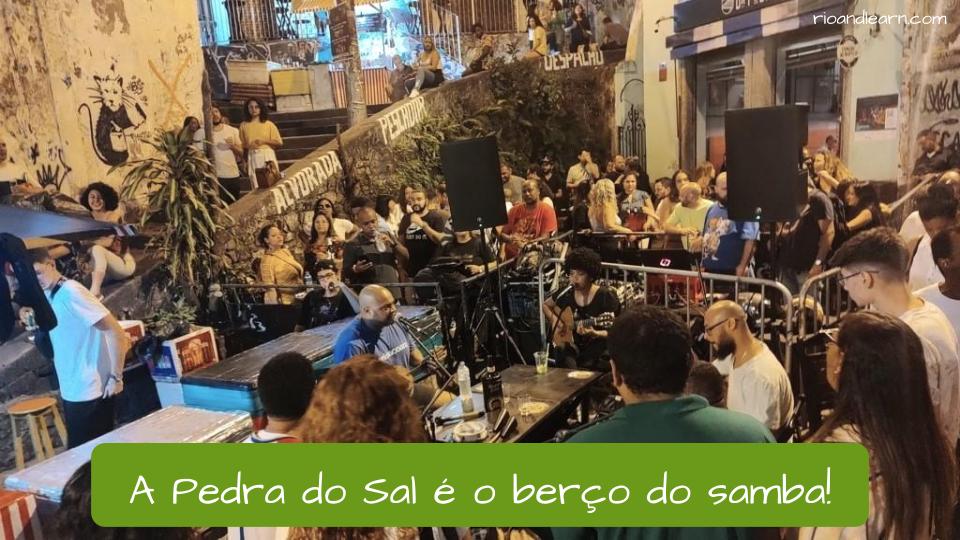 Hello, how are you doin’? Today’s Dica do Dia will be all about Brazilian culture. If you’re familiar with samba or funk, you’re already familiar with Brazilian music! But what about the accompanying dance moves? Are the Brazilian dances different from those in other countries? Today, we are going to discuss dances from Brazil and their history. We’ll take a look at many famous and important dances like samba, forró, bumba meu boi, carimbó, frevo, maracatu, baião, jongo, coco and funk! So put on some comfortable clothes, and come dance with us!

Dancing is somuch more than just entertainment, a physical activity. It is also a rich source of a culture’s history. In the case of Brazil and its complex miscegenation, understanding dance is key if you want to understand the country’s past and the Brazilian identity!

The rhythms, instruments and movements all have different origins. Our dances were influenced by indigenous people, enslaved Africans, and colonizing Europeans alike.

Let’s check out ten famous traditional dances in Brazil and their origins!

Of all the Brazilian dances, samba is probably the one that everyone associates with Brazil! Although it is understood as a classic dance from Rio de Janeiro, samba actually has its roots in Bahia. It was in Bahia that African slaves began to combine their traditional dance styles. Little by little, samba gained promincence in Brazilian culture, and sub-genres started to emerge, like samba de roda, samba de gafieira and samba-enredo. You can get to know more about samba and its sub-genres in our Dica about samba!

And if you want to learn how to samba, we have a really nice RioLIVE! activity! But if you really want to dive in and learn more samba for a longer period, try our Samba Weeks!

Although it looks like samba, it is not! Carimbó is a traditional dance from Belém do Pará, in northern Brazil. Also known as Samba de Roda do Marajó, carimbó has its own identity. The name comes from the curimbó, the main instrument used in this dance. The choreography is traditional, with recurring elements that have their own specific meaning. For example, if a man wants to ask a woman to dance with him, he must clap his hands for her.

Bumba-meu-boi, or boi-bumbá, is one of the principal folkloric dances in Brazil! It is extremely widespread in the North and Northeast of the country, and carries Portuguese, Spanish, African and indigenous influences. In the city of Parintins, in Amazonas, the biggest Brazilian party dedicated to this style takes place. The name of the festival is Festival Folclórico de Parintins, with the Caprichoso and Garantido oxen parade.

The dance revolves around a very beautiful ox, which dies and then rises again. This dance has such a prominent role in the Brazilian identity that it was listed by Unesco as Intangible Cultural Heritage of Humanity.

When we think about carnival, most of the time we imagine that samba takes over the whole country, right? But in Pernambuco, the party is centered around a different dance: the frevo! Frevo is a musical rhythm that has no lyrics, only choreography. The dancers perform in a lively fashion, with colorful clothes and umbrellas. It’s a contagious and very fun experience!

Although traditionally from the Northeast, forró has concuered the hearts of all Brazilians, as it currently is the second most popular dance after samba! This is the dance that takes over the Festas Juninas in the Northeastern states, especially in Paraíba and Pernambuco. It is always danced in pairs, combining spins, side splits and lots of fun! Did you know we also offer forró classes in our RioLIVE! activities? Come learn how to dance forró with us!

In Pernambuco, we have another Brazilian folk dance that is the face of Brazil: maracatu. The dance stems from African religious cults, originating during the colonial period. That explains the many spiritual elements of this dance! The term maracatu is associated with “dance” or “batuque” for Africans. Apparently, Pernambuco is the birthplace of Brazilian dances!

Closely associated with forró, baião is also danced in pairs, and it portrays the lifestyle and the difficulties of the sertão. What distinguishes forró from baião is that baião has indigenous and caipira influences. Luiz Gonzaga is the main artist of baião, and was nicknamed the “King of Baião”.

Common in southeastern Brazil, Jongo also has its roots in the culture of enslaved Africans. In this dance, a pair performs movements in the middle of a circle and ends their dance with the “umbigada,” accompanied by percussion instruments and the by-standers’ clapping.

Unlike other rhythms that originated in a state of slavery, Coco is a rhythm of resistance! Born in the quilombos, the rhythm mixes African influences with the sound of breaking coconuts! It is mainly widespread in northeastern Brazil. Coco is an important cultural activity of the Brazilian quilombo!

Although it is different from the international type of funk, Brazilian funk is awesome! Funk is a mix of samba, Miami bass, Latin music, traditional African religious music, Candomblé, hip-hop and freestyle. The genre is an authentic expression of the Afro-Brazilian culture from the so-called favelas, and it is a very important part of Brazilian culture at large. If you want to enjoy or learn funk carioca and other parts of our culture from within, we have the right immersive program just for you!

So, what do you think about these dances from Brazil? Did you discover new dance styles today? Maybe the carimbó dance? Which one was your favourite? Perhaps frevo? Can you name any songs that accompany these dances?