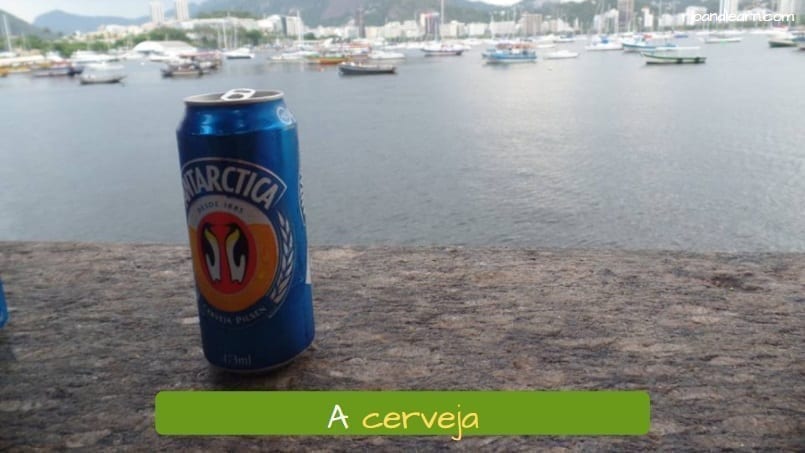 Hello friends! Are you ready to learn Portuguese? Today we’ll learn a verb that’s currently related to a need we all have, sometimes a physical need, sometimes social. The verb is beber, which sometimes is also tomar in Portuguese. Here you’ll see the conjugation of the verb to drink in Portuguese and practice with a fun quiz. Also, we have a list of some of the things we drink to enrich your vocabulary and practice the pronunciation of these words. Let’s go!

Conjugation of the verb to drink in Portuguese

Drinking is one of the most important physical needs. Drinks and gastronomy are a very important part the culture of a country, and Brazil has a strong cultural identity, as you know. We’ve already studied the verb comer, now let’s go to the conjugation of the verb to drink in Portuguese.

Every different place has it’s traditional drink, right? It could be something people drink in the morning, for example a juice from a local fruit, or an alcoholic drink that has a story from that particular place. What do you know about Brazilian drinks?

Let’s start learning how to conjugate the verb, then we will go back to talk about drinks. Okay? Take a look at these examples of sentences with the verb to drink in Portuguese:

Beber is a regular verb with the  -ER ending. To conjugate this verb is very easy, you just have to pay attention to the regular endings, which are highlighted in bold on the chart below, and remember them. Easy, right? Let’s go, then!

What we Drink, in Portuguese

Now tell us what do you know about the drinks we have in Brazil? Do you have a favorite? Are you thinking about the same drink as me? Oh yeah! CAIPIRINHA!!! But this is not the only one you know, right? I hope not! In any case, we’ve prepared a list of drinks in Portuguese for you. Here you have some of the most common drinks we have in Brazil and some of the typical ones you’ll try here with us at our school in Copacabana.

*Chimarrão and mate are both tea from herbs rich in caffeine but one is served very hot in a container made from a calabash gourd, using a metal straw (typical in other South American countries and the coldest states in Brazil), and mate is a soft drink, served chilled, and common on the beaches here in Rio with ice and a touch of limonada.

Also, there’s the verb Tomar in Portuguese that has the same meaning of beber in some situations. This verb is used mostly in informal cases or in expressions that are common in a region. For example, tomar água, tomar café, tomar uma cerveja, tomar um lanche (that includes eating as well)

If you don’t know what caipirinha is, you really should learn, Caipirinha is a national symbol! And if you want to learn how to make one, we teach you here.

Now that you know the conjugation of the verb to drink in Portuguese and have seen some of the drinks, let’s listen to the pronunciation of some of these drinks we have just learned and answer a couple questions:

What about you country? What are the typical drinks you have?
Are there specific drinks for different seasons of the year?

Have you ever thought about drinking a beer while studying? If you study Portuguese in Brazil with us, you’ll see that sometimes a fresh coconut water or a cold beer can help improve your language learning! We can study Portuguese at the beach bebendo água de coco or at a cafe bebendo um capuccino. Come and see our courses and choose the best for you!

A game about drinks in Portuguese

Before you leave, let’s play a game to make sure that you can order your favorite drinks in Portuguese.

So, what was your score? Do you already know everything about these drinks or do you still have to practice a little bit more? A great way to practice it is going out and ordering a drink.

Let’s drink a caipirinha together?

See you next Dica. Bye Bye!