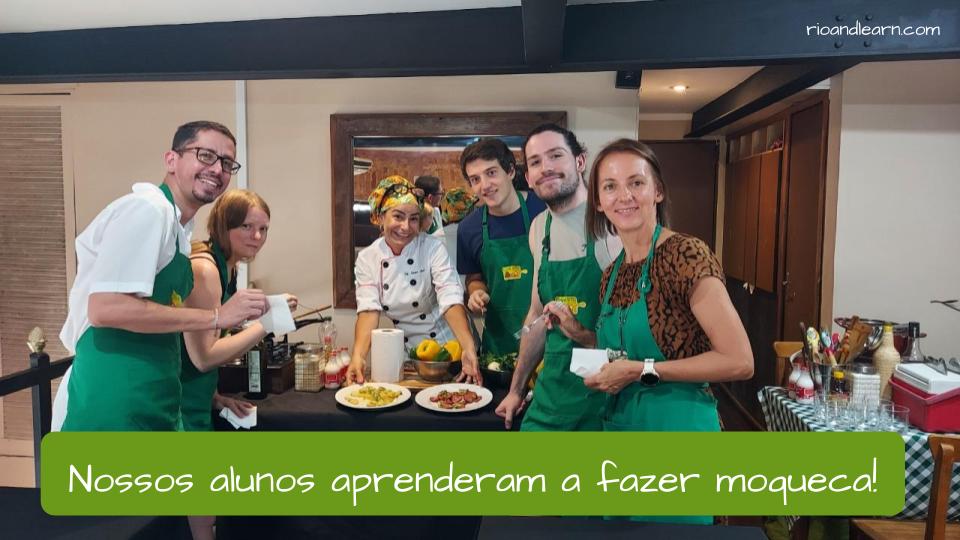 What’s up! Tomorrow is Good Friday and here in Brazil it’s a tradition not to eat meat, only fish. That is why today we are talking about Fish in Portuguese! You will learn the names for some fish in Portuguese, such as cod, mackerel and sardines. We have many different ways to explore Brazilian cuisine with fish dishes! And you will also learn about the famous Brazilian fish stew: the moqueca, which can be made with seafood or even salmon, and resembles a fish soup!

It’s impossible to live in Brazil and not fall in love with the coastal cuisine! There are many different types of fish, seafood and other delicacies. We decided to present to you the most well loved Brazilian fish and their dishes. The next time you come learn Portuguese in Brazil, you will be ready! And, obviously, we added a little bit of fun by giving them titles, as if they were kings! 😛

Cod fish: This dude here is simply the main ingredient for the most typical dishes at Easter! Salted, dried and then cooked in dishes like bacalhoada and torta capixaba.

One of the cheapest options, this one is friendly to your finances! This fish is delicious if cooked with a good sauce!

They are from the same family as the tuna! They are very good swimmers and very punctual during the mating season.

Salmon is for sure one of the most popular fish in the world. An interesting fact about it: in the West, people eat captivity Salmon (almost 99%); while in the East, people eat Salmon caught in the wild (over 80%).

It is a versatile and tasty food that is very practical in terms of preparation. It is likely that the word “sardines” originates from the name of the island of Sardinia, where they were once abundant.

The scientists consider Sole one of the healthiest types of fish! And besides, it’s very eclectic: you can use it in any dish from refined recipes to simple foods!

It is the true combination of health, flavor and texture. In São Paulo, you might hear the term “truta” as slang for “friend”.

Tuna is one of the most popular foods that come from the sea. This is because it is a fish that is present in almost every continent for fishing. Most of the tuna caught is industrialized and sold in cans.

What About This Famous Moqueca Stew?

To simplify, the moqueca is a Brazilian seafood stew. The name moqueca comes from the term mu’keka in Kimbundu language. But why is moqueca considered the ultimate Brazilian fish stew? To begin with, the best way to prepare a traditional moqueca is using terracotta casserole. The ingredients revolve around shrimp, fish, tomatoes, onions, garlic, and lime. But, of course, people add or remove ingredients depending on their personal taste. The result is a stew with a very thick and rich sauce! If you want to learn how to make a delicious moqueca, we have the perfect RioLIVE activity for you!

In Brazil, we often say we have two variations of the moqueca:

The state of Bahia was responsible for the creation of this amazing Brazilian fish stew. African and Portuguese cuisines have heavily influenced it. We can see these influences in the use of dendê red palm oil and coconut milk. Most Brazilians consider this one the “traditional” version, which is served with chopped coriander, rice and farofa.

Moqueca capixaba is native to the state of Espírito Santo. It is a softer and lighter version of the traditional moqueca. This version also has fish, shrimp, crabs, and lobsters. It is accompanied by plantain, pirão, and white rice.

Hope you enjoyed it, and we’ll be waiting for you in our next Dica!