Hello! Let’s learn more Portuguese? Today, we are going to talk about gender in Portuguese. We’ll explain the difference between masculino (masculine) and feminino (feminine).

Talking about Gender in Portuguese

Generally, masculine and feminine words in the Portuguese language are introduced by the article a and o to express their gender (male and female). In some cases, a word can be differentiated by the ending: -o for masculine words and -a for feminine words. Examples: a escola (the school), o cachorro (the dog).

In other cases, a specific word is used for a masculine word or feminine word. Example: homem (man) x mulher (woman). Here are some examples: 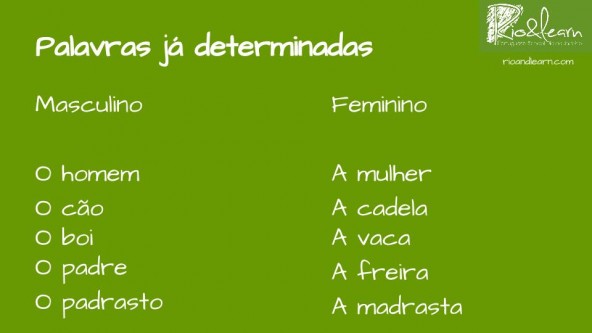 Gender in Portuguese in Variable Nouns

We use the ending -o for masculine words and -a for feminine words. This rule can help us a lot, because the majority of the words that end in o are masculine and most words that end in a are feminine. But, this rule has a lot of exceptions. So don’t be misled by the last letter of the words, we need to know all the rules to understand it completely.

Take a look at these examples and notice that the Portuguese masculine and feminine words are marked with an a and o at the end. 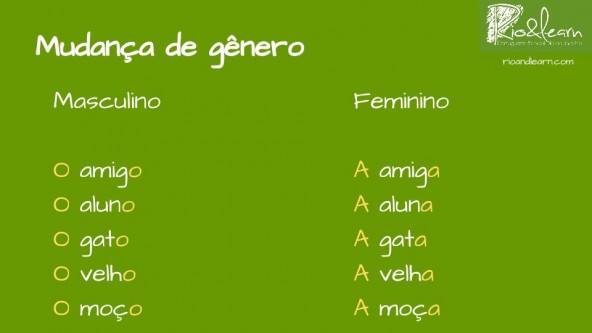 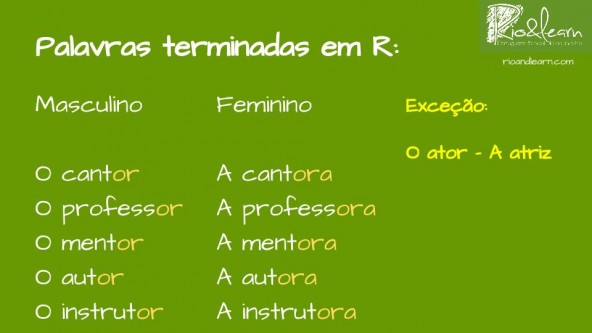 And of course, we have an exception, the word ator (actor) becomes atriz (actress) in the feminine form.

Words ending with -ante should be accompanied by the articles a and o to indicate the gender. It means that these words are neutral words and in order to specify the gender we have to rely on the article that comes before the word. If you only say the word estudante for example, a native speaker won’t know if you are talking about a man or a woman, so you’ll have to make it clear with and article or an adjective. 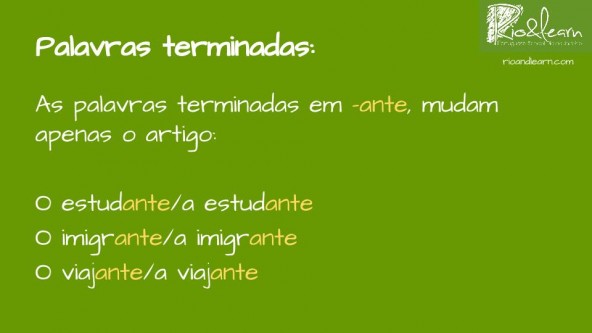 Words ending in -ente should be accompanied by the articles a and o  to indicate the gender. Following the same logic as the words above, the word that end in -ente must have an article to specify their gender too. If you only say presidente, for example, I don’t know the gender of the person you’re talking about. 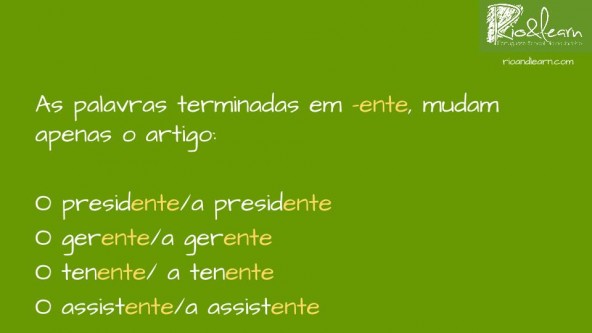 Fun Fact: Did you know that when Dilma Rousseff was elected many people started using the word presidenta because they thought it was important to mark the gender in this word? Especially, because she was the first female president in Brazil.

Words ending with -ista should be accompanied by the articles a and o  to indicate the gender. Just like the words we’ve studied above, the words that end in –ista can only be specified with an article or an adjective. To know the gender of the subject, we need to complete it with more words. 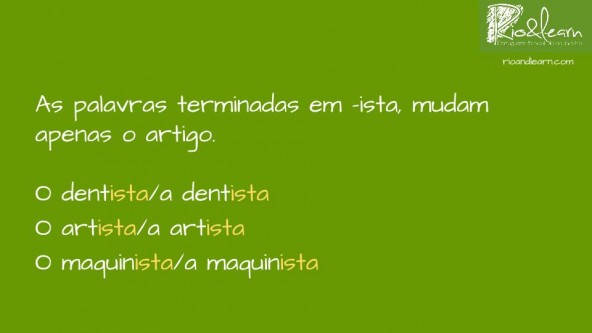 There are some words that are always feminine in Portuguese. This helps us to learn them correctly. So, the first rule is: when the word ends in -agem, it is feminine. As you already know, Portuguese is a language with a lot of exceptions, and the exception to this rule is the word personagem. This word ends in -agem, but it can be used to describe both genders. 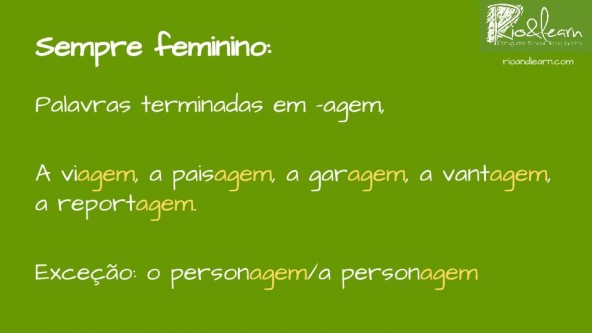 To make things easier, words ending in -ade are almost always feminine words! There’s only one exception to this rule: nômade (nomad) – it can be both masculine (o nômade) and feminine (a nômade). But still good enough, no? 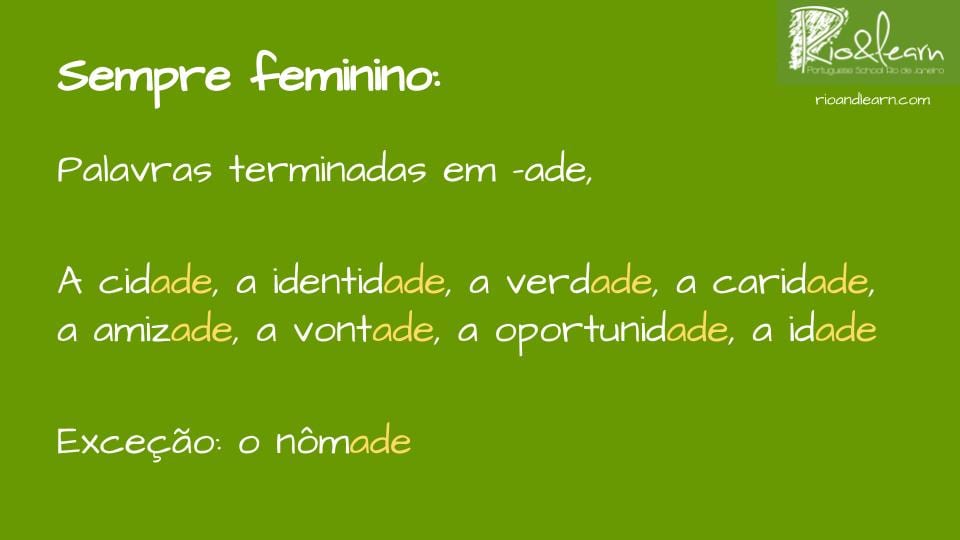 Words ending in -ção are almost always feminine too. Once again we have one single exception — the word coração (heart) is a masculine word. 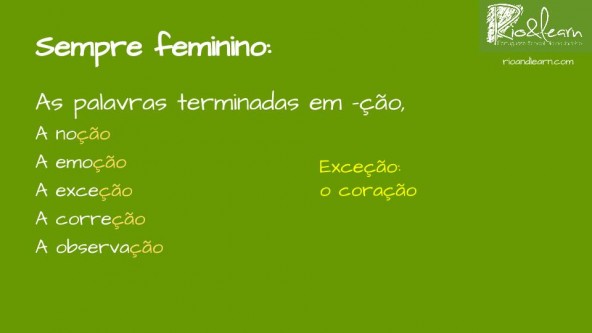 Even though this one is a bit harder to get a hold of, you can keep it in mind: words ending with -ície will be feminine as well.

Just like in feminine words, we have some rules to determine the masculine words in Portuguese. The words that end in -grama are always masculine words. 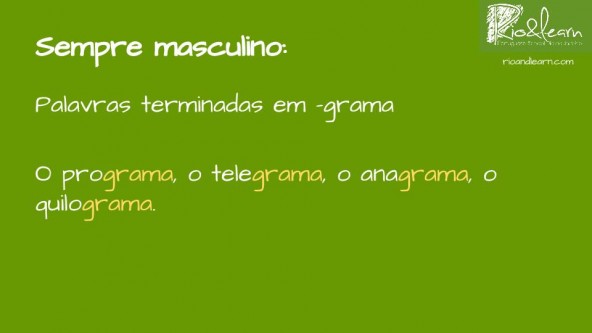 The words that end with an á (the letter a with an acute accent) are always masculine too. Check out some examples: 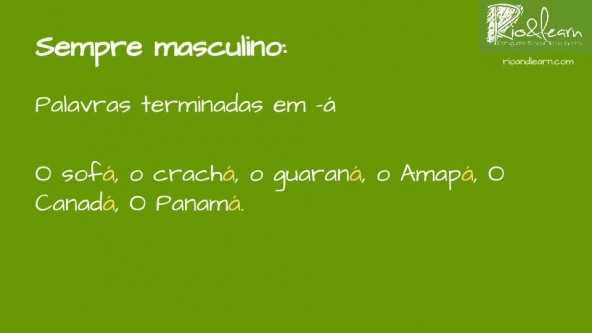 Pay attention to this because a lot of students get confused with the word problema (problem), and we use this word a lot, right? The words that end in –ema  or –oma are always masculine too. So, don’t get confused just because it ends with an a. You would think that if it ends with an a it’s feminine, right? No! Because these words don’t end only with an a, they end with –ema/-oma and follow this specific rule. 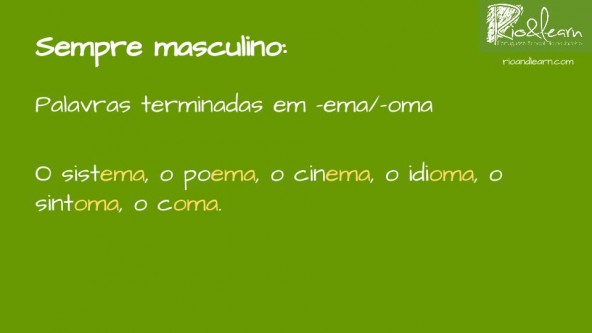 Examples of masculine and feminine words in Portuguese

Now we know how to differentiate gender in Portuguese, shall we practice?

Exercise 1 about Gender in Portuguese

Change the sentences into the feminine:

Exercise 2 about Gender in Portuguese

Now we have a few words that you have to transform into the opposite gender. Don’t forget to change the articles too!

Any doubts?
Don’t forget you can always check if your answers are correct at the end of the page.

See you in the next Portuguese lesson.
Beijinhos!

Exercise about gender in Portuguese: answers