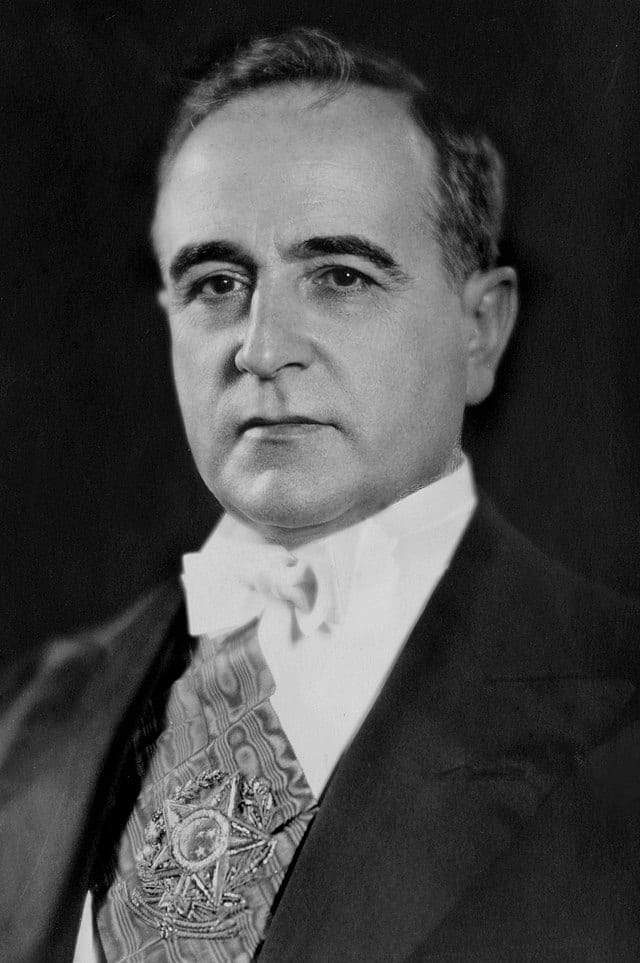 Hello, my friends! Ready for another history Dica? Quick question, do you know who was Getúlio Vargas? Have you heard about the Estado Novo (New State) in Brazil? Do you have any guesses what it could be? Let’s learn about it now and see some of the achievements!

Who is Getúlio Vargas?

Getúlio Vargas’ biography is very extensive, so let’s try to make it short! He was born on April 19th, 1882 in São Borja, Rio Grande do Sul, and was a Brazilian lawyer and politician who ended a period called República Velha (The Old Republic) and started the period called Estado Novo (The New State). Vargas was the president for two different periods, 1930 – 1945 and 1951 – 1954. Before Getúlio, the republic system in Brazil was only for the elite and consisted only of presidents elected from São Paulo and Minas Gerais, alternating back and forth. This was also called Política Café com Leite (Coffee and Milk Politics), since the economy in São Paulo was based on coffee production and the economy of Minas Gerais was based on dairy production. Getúlio led a movement to empower the population, the ordinary man, that gained force amongst the people and who eventually elected him president, creating a centralized government based on socialist values, populism and unfortunately ending in dictatorship. Let’s learn a bit about the Estado Novo in Brazil (the New State)!

The Estado Novo in Brazil created by Getúlio Vargas

We know that elections in Brazil take place every four years, but Getúlio Vargas was a much loved figure and he decided he deserved to stay in power longer, without the necessity for elections. Some historians say that the tactic used by him to stay in power was to create a political rumour (some very creative gossip lol) saying that there was a communist threat in Brazil called the “Cohen Plan”.

Yes, two years earlier the communist party did try to take power in Brazil, but the attempt was unsuccessful! But due to this, congress had given Vargas more powers and approved the creation of the “National Security Court”.

So Vargas declared a state of emergency and ended the Legislative area and changed the 1934 Constitution (almost ended it!) so that he could have all the power in his own hands, creating what we call the “New State” (Estado Novo). The Estado Novo in Brazil lasted for almost nine years (1937-1945) and nowadays it is seen by some as a coup d’état governed by an almost totalitarian constitution.

The Estado Novo and its achievements and controversies

Despite the fact that Getúlio was known as a “man of the people”, this period was also known for the censorship of the media and the arts, such as theatre, cinema and music, and the censorship of political and social manifestations.

But even with these issues, Getúlio Vargas is still admired by many in Brazil to this day, mainly for the creation of an infrastructure to help the population and labor laws introduced and still applicable today, which guarantee workers’ rights protecting the employees from exploitation. Previously these laws tended to be favorable to employers and ruling classes and not for the population.

Below are some of the main achievements of this period:

After leaving the presidency in 1945, Getúlio Vargas was elected to be a senator for Rio Grande do Sul in 1946. In 1951, he ran for presidency again and had a landslide victory over his opponents. He kept his socialist politics, but remained and respected being a democratically elected president and this time not changing the laws to become a dictator.

He also created a campaign called O petróleo é nosso! (The oil is ours!) The campaign advocated for prohibiting foreign companies from drilling for oil on Brazilian territory. Right after this movement, Petrobrás, the national oil company, was created by his government.

The end of the Vargas Era and his suicide

In 1954, the political environment in Brazil was tense and problematic. There were strong critics in the press attacking the Vargas government. Military officers were also unhappy with some decisions that they considered a left wing  concern being made by Vargas. The people were also very unhappy because of the difficult economic situation that the country was facing.

Because of this, there was an enormous pressure on Vargas to resign, and conspiracy theories arose in the media. Vargas, unable to accept the criticism, committed suicide at his residence, Palácio do Catete, in 1954 by shooting himself in the chest and wrote a long letter explaining his sadness and dedicating his life, and death, to the Brazilian population.  Well, some people have their doubts about it…some say that he was murdered but it has never been proved. Crazy, right? What do you think?

Now that you’ve learned some important Brazilian history, are you ready to practice your Portuguese? Check this out!

Answer the questions below with the correct information about Getúlio Vargas: