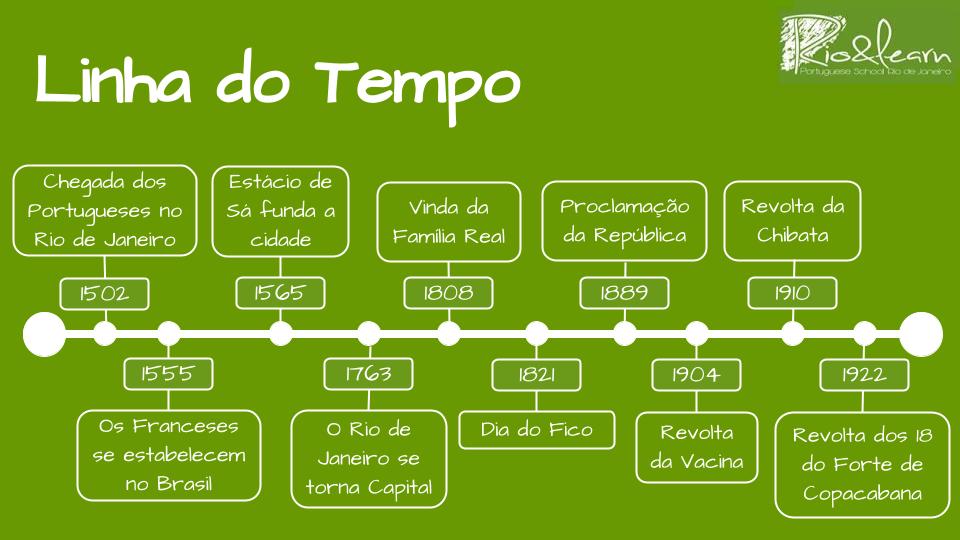 What do you know about Rio de Janeiro‘s history? Many people – travelers and cariocas alike – walk through the streets of Rio without a clue of what it took to get our beautiful city to where it is today. But we’ve got a rich and incredible past that dates back over four hundred years. So for today’s Dica, we’re going back to the roots of what it meant to be carioca. Let’s talk about the history of Rio de Janeiro!

History books may say that Brazil was discovered in 1500. But who said it was colonized then, too? In reality, most of Brazil remained free from the Portuguese for a few decades, because Portugal didn’t see much value in exploring the country.

When the Portuguese first arrived in Rio de Janeiro in January 1502, they came to a simple conclusion. The Guanabara Bay was obviously the mouth of a great river! And so they named it such: January River – Rio de Janeiro. Geography be damned, right? The poor Portuguese simply didn’t know that wasn’t the case. And, afterwards, they just set sail and forgot all about the region for the next sixty years.

Now, surely, even though the Portuguese took no interest in Rio, that doesn’t mean it was entirely uninhabited. Initially, the natives who lived around the Guanabara Bay were of macro-jê origin, but sometime in the 11th century the tupi conquered the region. The first tribe to greet the traveling Europeans in Rio was the tupinambás (also known as tamoios). And they played a big role in the history of Rio de Janeiro.

A City is Born

In the 1550s, the French docked in Rio de Janeiro. Having seen no Portuguese settlements around, they decided to settle there themselves. They befriended the tupinambás, exiled the other local tribes and built the first Fort in Rio de Janeiro: Fort Coligny.

The Portuguese weren’t happy to hear that France wanted a chunk of their territory – albeit an abandoned, non-colonized chunk, but a chunk nonetheless! And so they allied themselves with the temiminós, another tribe of the region. The battle for Rio de Janeiro was a fierce one, so Portugal decided to go all in. The Governor-General of Brazil then decided to send one of his own to solve the issue.

The city of São Sebastião do Rio de Janeiro, as it was called back then, was founded on March 1st, 1565 by Estácio de Sá, who disembarked somewhere between the mountains Cara de Cão and Pão de Açúcar. By 1567, however, the French were long gone. Unfortunately, so was our hero. Estácio de Sá died after an arrow wound to his face in the final battle for our city. Rio de Janeiro’s history is what it is because of him.

By the second half of the 17th century, Rio de Janeiro was considered the most populous city in Brazil with about 30 thousand residents. This brought great importance to the city in the colonial era. With the discovery of gold and diamonds in Minas Gerais, the capital was transferred from Salvador to Rio in 1763 thanks to the Marques de Pombal. Rio then became an important port for commerce.

Rio de Janeiro remained the capital until 1960. By then, a new special city in the centre of the country had been planned and built to serve as the new capital: Brasília. Rio, however, remains a large and significant city in Brazil. It’s the second biggest city in the country, losing only to São Paulo.

Rio de Janeiro was the stage of many great events in the history of Brazil. Let’s talk a little bit about some of them, shall we?

The Arrival of the Portuguese Royal Family

In 1808, Napoleon was conquering European countries right, left and center. And Dona Maria I sure didn’t want to join the list of powerless and destitute monarchs. The solution? As Napoleon’s troops approached Lisbon, she simply took off to Rio de Janeiro. This was very important for Brazil. Now, hosting the royal family, it was no longer considered a colony, but an equal part of the Portuguese Empire – better yet, of the new United Kingdom of Portugal, Brazil and the Algarves.

Brazil’s Independence and the Dia do Fico

When was slavery abolished in Brazil? It may be sad to hear it, but the honest answer is very late. Slavery was only abolished in 1888 with the Lei Áurea. This law was signed by Princess Isabel in Rio de Janeiro, in the same Imperial Palace where her grandfather proclaimed he was staying in Brazil. You can read more about this part of Rio de Janeiro’s history in this Dica.

Proclamation of the Republic

Less than a century after Independence, Brazil would finally put imperialism and monarchy aside. On November 15th 1889, Marshal Deodoro da Fonseca proclaimed the Republic in downtown Rio de Janeiro. You can find out more about the Republic and Brazil’s Republic Day in this Dica.

Rio de Janeiro was the capital of Brazil for two centuries, so it’s hard to imagine that everything went smoothly. There were actually several revolts in the early 20th century.

The Revolta da Vacina (Vaccine Revolt) took place in 1904 after a law was passed declaring that vaccination against smallpox was mandatory. People were terrified and untrusting of the government and their new campaigns to improve sanitation and health conditions in the city. They believed the vaccines were evil, and revolted against their obligatory nature. Sounds familiar?

Now, the Revolta da Chibata (Revolt of the Lash) doesn’t quite fit the idea of civil unrest. It was a revolt that happened in 1910 within the Navy, due to the constant use of physical punishment against sailors. However, it had a racial aspect to it: most people whipped were low ranked sailors, and those positions were usually held by black and mixed race men. For that reason, this revolt is also a mark in the fight for social justice and equality in Brazil.

Finally, the Revolta dos 18 do Forte de Copacabana (Revolt of the 18 from Copacabana Fort) was the first movement against the Old Brazilian Republic. At the time, elections were often rigged and dictated by the two most powerful states: São Paulo and Minas Gerais. The soldiers in the Copacabana Fort, led by former president Marshal Hermes da Fonseca and his son, decided to revolt. Due to the pressures and attacks of the other military units, it all came down to 18 men marching on Avenida Atlântica. And despite being unsuccessful, those 18 men sure are a big part of the history of Rio de Janeiro.

Nowadays, Rio de Janeiro, also known as the Marvelous City, is the land of Samba, beaches, fun and beautiful people who exude happiness. The land of carnaval, the biggest party on Earth, and also host of the World Cup in 2014 and the Olympic Games in 2016. Oh, and of course, this is also where you can find our Portuguese school, Rio & Learn: the perfect place to learn Portuguese while having fun and learning about the Brazilian language and culture.

How about a little quiz? Practice your Portuguese by using what you just studied!

That’s it, guys!
Now we know a little more about the history of Rio de Janeiro!
See you later!