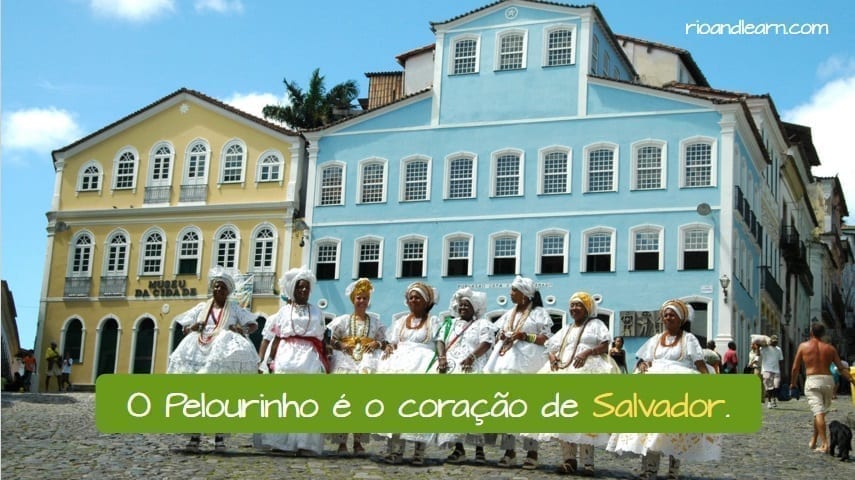 What’s up, guys! On our Dica today we’ll learn a little about the History of Salvador in Bahia, Brazil.

History of Salvador in Brazil

On March 29th, 1549 a group of Portuguese arrived in Salvador in three ships, two caravels, and one brigantine. With Tomé de Souse in charge by order of the king of Portugal, they found the Cidade-fortaleza do São Salvador. That was how Salvador was born.
Salvador was considered one of the biggest cities of the Americas for many years. It was also known for the sugar industry and the slave market. The city is, until today, the center of Brazilian Catholicism.

Salvador was the capital of Brazil until 1763 when Rio de Janeiro became the new capital. In the 1990’s there was a big government project towards the cleaning and revitalization of Pelourinho, which is known as the Historical Center of the city. Therefore, Pelourinho is a great cultural center and the heart of Salvador nowadays.

The city is also know for its Carnival. Being one of the most exciting parties in Brazil, it happens on the streets of the city with a typical Axé music played in the trios elétricos (a huge truck with an advanced and powerful sound system that works as a moving stage in Carnival). The famous Micaretas was created in Salvador’s Carnival. These small parties are celebrated just like Carnival, but in a different period of the year. It is also called Carnaval fora de época (Carnival out of time).

So guys, did you enjoy learning a bit more about History of Salvador in Brazil?

What to do in Salvador

Want to travel and know more about the history of Salvador? Here are some tips of what you can do there…
You can visit Igreja e Convento de São Francisco, a very famous church in the city.
If you like beaches, you must visit Ilha dos Frades, a little piece of heaven on earth.
Casa do Rio Vermelho is an incredible place if you like literature and history. It was where famous writers from Bahia lived, like Jorge Amado.
Praia do Farol da Barra is another beach that is very famous and is located at a neighborhood called Barra.
And of course, you have to visit Pelourinho and its colorful houses, located in the Historical Center of the city.

Vocabulary of History of Salvador in Brazil

Now that you know more about Salvador’s history, do you want to go there? Or do you already know this lovely place? Maybe you can come to Brazil and learn Portuguese in 30 days.
Also, come take a look on our Instagram and see pictures of another beautiful city: Rio de Janeiro.
A big hug from Rio&Learn, Rio de Janeiro!