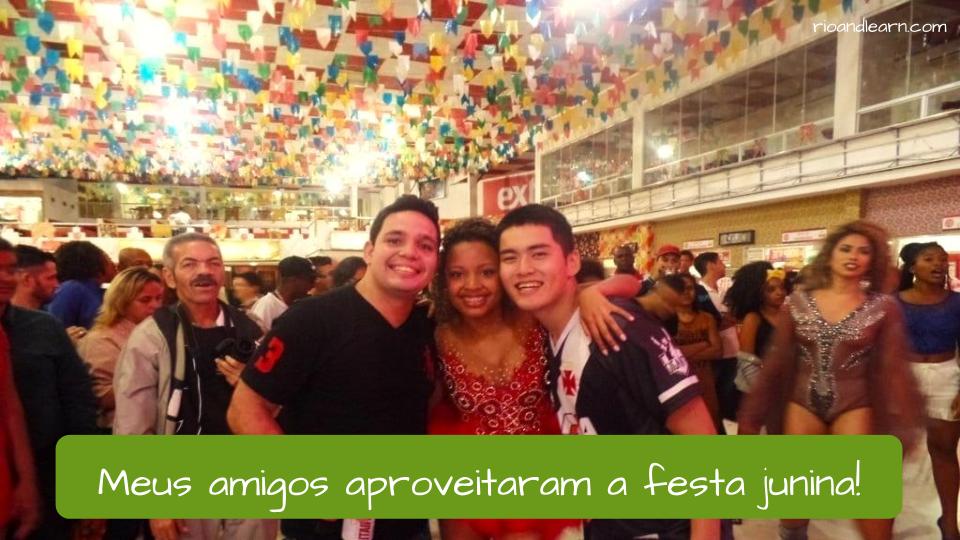 Hello folks! Ready to learn Portuguese? Today we’ll talk about one of the most important festivals in Brazilian culture: The June Festival in Brazil.

Festa Junina or Junina party is one of the most loved celebrations in Brazil. It is a catholic celebration where people prepare bazaars in honor of three saints. They are Saint Anthony, on June 13th; Saint John, on June 24th and Saint Peter, on June 29th. That’s why we call it the June Festival. We call it Festa Junina because Junino and Junina mean related to June.

But what is the June Festival after all?

The June festival originated in Europe, mainly in France, and was brought to Brazil by the Portuguese. Here in Brazil this party has its origins in the countryside and used to be a way to celebrate harvesting.

The period from June to September was dedicated to harvesting, soil preparation and planting new crops. The farmers would bring the products from their harvest to this celebration! In the beginning, the party was known as Festa Joanina in honor of Saint John, but then the name was changed to Festa Junina.

From the countryside, the festival spread to the big cities and nowadays each region has its own way of celebrating, always with an abundance of music and traditional food on offer. It is always cheerful and colorful, just like all other Brazil celebrations.

In Brazilian schools there are a lot of celebrations! Many children and teenagers dress in typical clothes, especially for this party, and rehearse different dances. It’s a great time to celebrate with parents and family!

Typical Foods of the June Festival

It is usual for the Festa Junina in Brazil to happen at outside venues for the celebration and in Portuguese we call these sites Arraiais. Normally, during the party there are stalls offering typical alcoholic drinks, such as quentão (an alcoholic beverage made with cachaça, water, sugar, orange peel and lime, cinnamon, clove and slices of apples). We play fun games like; Pau de Sebo (greasy pole), Pescaria (Fishing) and Correio elegante (Love letter) and often have fireworks. The Brazilian June Festival has a huge variety of traditional countryside food for sale. Each region has its own variety. Let’s take a look at some of these delicious dishes!

In the North region, for example, the most famous dishes are maniçoba, tacacá, tapioca, vatapá and bolo de mandioca (cassava/manioc cake). While in the North East, the most traditional dishes are baião de dois, cuscuz (made with corn flour, salt, water and butter) and caruru (made from okra, onion, shrimp, palm oil and toasted nuts).

From this region originates many great names of Brazilian Sertanejo – the type of music that is usually played at these festivities. Here we will find dishes such as pamonha (a paste made from sweet corn, boiled wrapped in corn husks. And it can be savory or sweet), sopa paraguaia, arroz doce (rice pudding) and empadão goiano (Goiano style samosa).

Differing a bit from these previous regions, the South of Brazil offers dishes that are more similar to the Southeast of Brazil, like salsichão (sausage), arroz carreteiro, churrasco and pinhão (a type of pine nut).

Dancing plays an important part in the festival, and so, two of the most popular dances that people practice are; the quadrilha (quadrille or country dance) and forró dances. Likewise, other traditional practices that you can see in a Junina party in Brazil include the building of a bonfire and the performance of a fictitious Farm Wedding in which a countryman groom marries a countrywoman bride and the bride’s father is usually an angry man that holds a rifle to prevent the groom from running away.

Let’s check out some typical music people dance during the June Festival.

This one is from the great master Luiz Gonzaga, responsible for much of the Junina Festival music.

Dominguinhos, another very traditional singer, is responsible for this one, which has as the title: “Look how amazing this is!“. We think it’s very apropriate for the June Festival 😛

This music is very traditional for the quadrilhas, even more for the ones presented in schools by children! Every Brazilian child knows this lyrics by heart!

Xote da Alegria is a more recent music, but rather loved and often played during Junina parties.

Vocabulary for June Festival in Brazil

That’s all folks! Hope you’ve enjoyed learning a little more about our culture and Brazilian celebrations.
Until next time, Cheerio!