Lapa and Rei do Limão

Last Friday we went to Lapa and Rei do Limão to enjoy our last RioLIVE! of the week. We were a total of 13 people, with Portuguese language students from France, Sweden, USA, UK, Germany, Italy and Peru. We started our visit with Cinelândia, where we took a picture of the Theatro Municipal do Rio de Janeiro. We saw the new Tram that the city will have for 2016 that looks great, even though lots of Cariocas are not sure about it.

From Cinelândia we went to Lapa where we visited the famous Escadaria Selarón. As we were learning about these famous stairs, it started to rain, but our students didn’t get upset as we decided to go have some cervejas as we were waiting the rain to stop. We learned what’s the meaning of the word petisco as we were having a Carne seca com aipim, and we also got to know what a Moqueca was soon after.

After that, the rain stopped and we went to the famous Boteco Belmonte, that has a franchise in Lapa, where we continue with some more chopps and petiscos. We talked about different themes in Portuguese. After that we went to Rei do Limão to learn how to make a caipirinha. It was very, very fan and our students had lots of fun with the jokes of Rei do Limão as he was asking on how to say some words in English. We finished very happy and satisfied. It was funlearning!!! 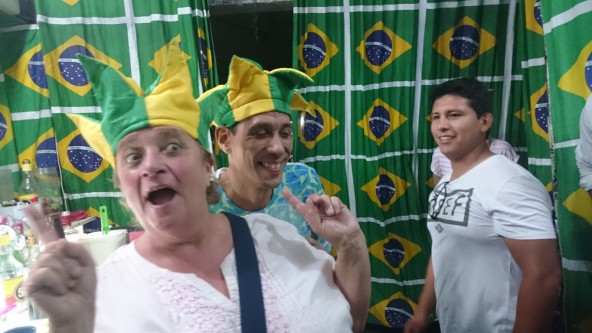 Lapa and Rei do Limão