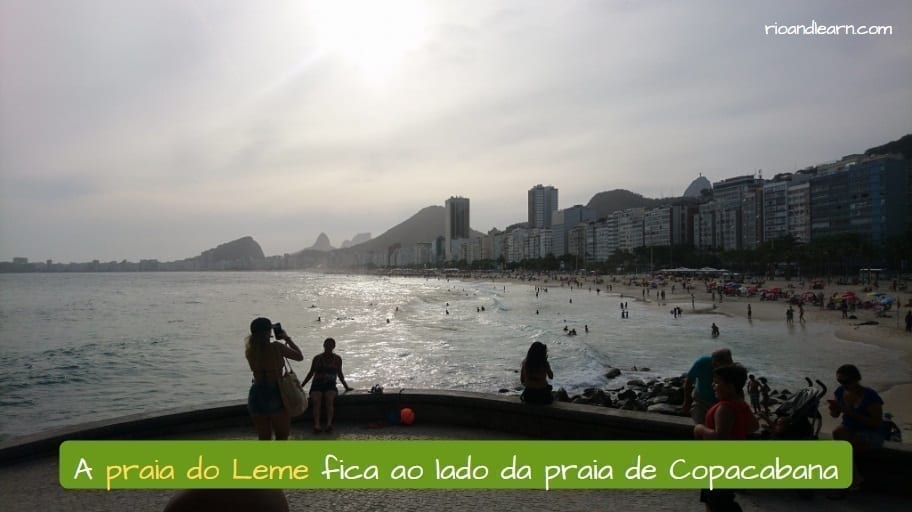 Olá! Beautiful day and perfect for a refreshing dive in Leme Beach in Rio, right? Next to Copacabana, you’ll find this smaller yet comfortable upper-middle-class neighborhood.

Leme was named after a Brazilian pioneer and because its rock formations resemble the rudder of a ship. It wasn’t until late XIX century that people started living there and made it the popular neighborhood it is today.

Also, it’s a great spot to play some sports, specially those most suitable for the beach, like Volleyball, Beach soccer and Frescobol.

So, you’re in a beautiful beach and you can even play some great sports in the company of friends or family!

It holds one of the biggest Hotels in Rio de Janeiro, the biggest in Copacabana to this day. Hotel Windsor Atlantica, former Lé Meridien that resembles a monolith and it’s a touristic hotspot. It became famous for its fireworks’ shows in Copacabana for the Reveillon party.

Leme’s beach is amazing, connecting to Copacabana and Ipanema, it’s their smaller and calmer sister, being a great call if you’re avoiding big crowds. It’s beautiful and houses the Duque de Caxias fort, that we visit on our RioLIVE!, right on top of it’s rock formations.

A cozy place, Leme is preferred by Cariocas for not having too many people around, so you pretty much have a whole beach to yourself!

Enjoy and that’s our Dica for today! Don’t forget to like this video and subscribe to our channel and to our A Dica do Dia too! Tchau tchau!