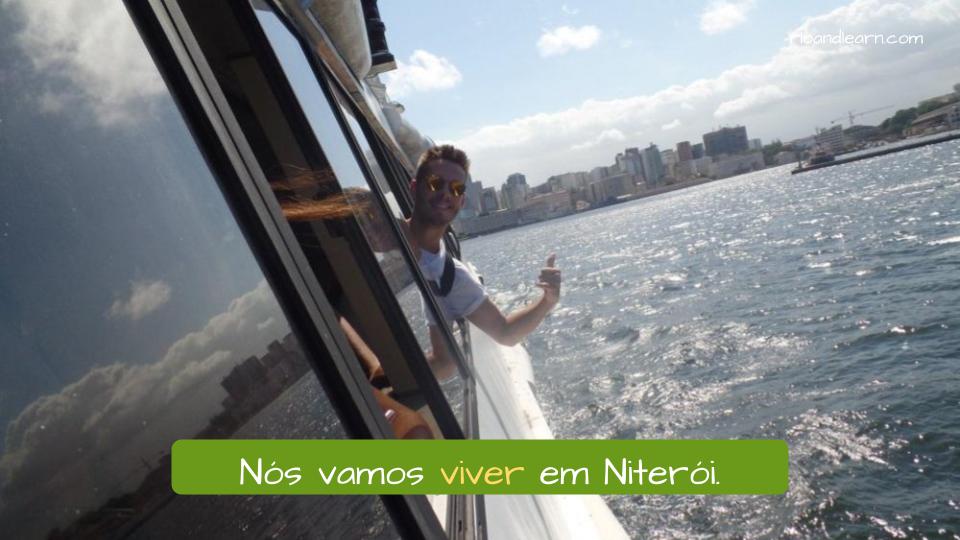 Hello, everyone! How are you today? I hope you’re excited to learn Portuguese! Today we’re going to study a very important verb that we use for different situations both in English and in Portuguese, but first try to answer these questions: Where do you current live? Do you like the idea of living in Rio de Janeiro? What to you need to live well? In case you couldn’t answer all these sentences confidently, we are here to help you understand both the verbs viver and morar meanings. Let’s start learning the verb to live in Portuguese in all tenses, look at the chart below with the endings highlighted in bold making it easier to learn . Check it out!

Conjugation of the verb to live in Portuguese

Live in Portuguese can be translated to both the verbs morar and viver. The verb morar we have already studied before, it’s a verb used to talk about the place where you reside with the idea of an address. Now we are going to look at the second verb: viver in Portuguese. This verb is related to the idea of being alive, a place where you are currently living, and also a place you go frequently or a habit you don’t stop doing.

Nós vivemos na Lapa porque as festas de lá são muito boas.
I live in Lapa because the parties there are very good.

Note that viver is a regular verb with termination -ER. Pay attention to all the endings highlighted in the conjugation chart and see how you can create sentences with the verb to live in Portuguese.

Take a look at the conjugation of viver in Portuguese.

Super easy, right? Now take your time to analyze these examples and try to create your own sentences with live in Portuguese, using both the meanings viver and morar.

Example of the verb to Live in Portuguese

Quem vive na praia está sempre bronzeado.
Those who live on the beach are always tanned.

More meanings of Live in Portuguese

We think it’s important for you to know as much as possible about the use of viver in Portuguese, so we’ll take a look as well at an adjective very often used in English that’s sometimes confused for having a different form in Portuguese.

Do you remember the name of the activity we promote for our students to learn and practice Portuguese meeting up with other student groups? It’s RioLIVE! We use the word in capitals because it refers to the idea of seeing the best parts of our city and demystifying all that you might be curious about! Does that ring a bell with any of you? Yes! That’s the same expression we use to talk about concerts that you watch live or even seeing someone in real life you can say that you’re seeing that person live. In Portuguese we use the expression AO VIVO for these situations. Let’s see some examples.

Example of Live as an adjective in Portuguese

They are the uses of live in Portuguese, folks! How d’you like it? D’you want to learn more? You’re welcome to come and meet us at our school in Copacabana. One of the most beautiful neighborhoods to live in Rio. 🙂

Don’t forget to subscribe to A Dica do Dia to receive every day a new tip and become an expert in Portuguese very soon.