Meaning of the Portuguese Word Nossa 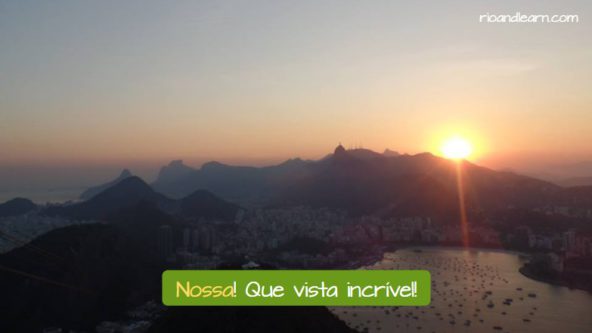 Hello everyone! Let’s study Portuguese!
Today we are going to learn the meaning of the Portuguese word Nossa. You have probably heard a lot of Brazilians say this word.

This word has two meanings in Portuguese. The first one is the possessive pronoun Our/Ours. We use it to talk about belongs we have. Let’s take a look at some examples:

You’ll see that many Brazilian people use Nossa as an exclamation. The word Nossa can be used to express enthusiasm or to show that you are impressed with something. It means wow and it can also be used in a positive or negative way. Let’s see:

Nossa as an exclamation

The word Nossa also became very popular after the song Ai Se Eu Te Pego from the Brazilian singer Michel Teló. Have you heard this song before? So, let’s hear it!

So guys, what kind of Nossa does the singer use in this song? The Possessive Pronoun or the Exclamation? Let’s see if you can guess right!

That’s it for today galera and if you want to watch more videos you can subscribe to our YouTube Channel.
See you on our next Video Dica.