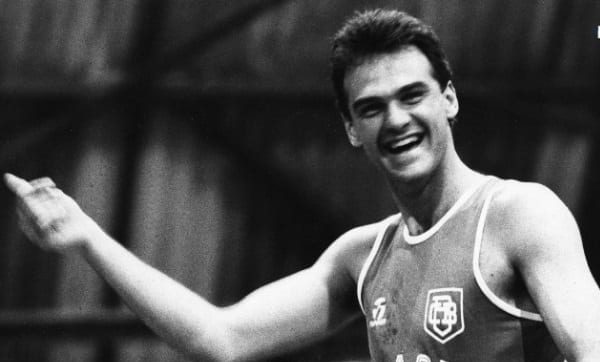 Hello everyone! Are you ready for another Dica? Today we have a Video Dica about a great Brazilian record breaking basketball champion. Have you heard of Oscar Schmidt, the Holy Hand of Brazil? He is known for his amazing stats, here you’ll see some interesting things about his career such as his NBA draft, some sporting gossip, Oscar’s Hall of Fame speech and his connection with Kobe Bryant.

His full name is Oscar Daniel Bezerra Schmidt and he is a retired basketball player in Brazil. Oscar Schmidt started his career playing for Palmeiras, a basketball team from São Paulo and played in eight more teams, two of them in Italy and one in Spain.

He is considered to be one of the best players of all time, and he was so good, that he is the greatest scorer in basketball history with the incredible number of 49.737 points. More points than any NBA player. When a basketball player scores lots of points in a game we call him a Cestinha, and Oscar Schmidt is known as the biggest cestinha in the world, earning him the nickname The Holy Hand of Brazil. In Portuguese, Mão Santa.

Oscar Schmidt was an idol to another idol

Kobe Bryant himself said he considered Oscar a childhood idol. Growing up in Italy, he admired the Brazilian player who often beat his father Joe Bryant’s team. For him, Oscar was one of the biggest scorers of all time, and would call him “The Bomb” for his long distance shots.

They never spoke at the time, but Oscar tells some anecdotes about the times they saw each other in the stadiums. He jokes that Kobe was a little bit annoying, being there at every game and standing on court before the games got going, until someone would ask him to leave or just get him out of there. At this time Kobe was around 8 years old and Oscar 26.

Years later, Kobe became a famous player for the Los Angeles Lakers, but Oscar only found out he had an impact in his career after he was already retired. Kobe Bryant died in 2020 with his 13-year-old daughter and seven other people in a heart breaking helicopter crash in Southern California.

Oscar was a good scorer

Oscar Schmidt’s stats are also very famous. He never left a practice session without scoring twenty times in a row, and that dedication was mirrored in his games. Oscar Schmidt played 271 games without missing a single one on the Italian Championship.

He is the player with the highest number of Olympic games under his belt, 5 in total, and guess what… The Holy Hand is also the player to have scored the highest number of points in any Olympic game, which was 55 points against Spain in 1988. Here in Brazil he played 326 games, scoring a total of 7.693 points, an average of 23 points per game and the game with the most points was in the Paulista Championship, where he scored a grand total of 74.

Oscar Schmidt and NBA was big news  back then. In 1984 we saw Oscar Schmidt at the NBA Draft being honored by the call of 131st by the New Jersey Nets. But turned down this opportunity to play in the NBA because it meant he would not be able to play anymore for the Brazilian national team, NBA players only started to play in the Olympics in 1992. Oscar won a bronze medal from the World Championship, and a gold medal in the Pan-American Games.

All that helped him enter the Hall of Fame on the 8th of September 2013. Below you can see the amazing speech from Oscar Schmidt in the Basketball Hall of Fame event. Take a look:

Another fight in Oscar Schmidt’s life

On the top of all that, this warrior has been fighting cancer for almost 10 years, he almost had to have a transplant in 2014 but has been responding well to treatment since then. And appears always in a good mood! Let’s send good energies to this fighter that already gave us so many magical moments and deserves the best.

What about in your countries my friends? Is Basketball popular? Who is the best Basketball player? Tell us!
And don’t forget to subscribe to our YouTube Channel!

Also, learn more about Rio, take a look at our RioLIVE! Activities!

If you want to keep learning Portuguese, stay tuned to our Dicas and who knows, maybe you can take a class here in our school in Rio de Janeiro. We’ll be happy to have you!

See you next time!
Bye bye!