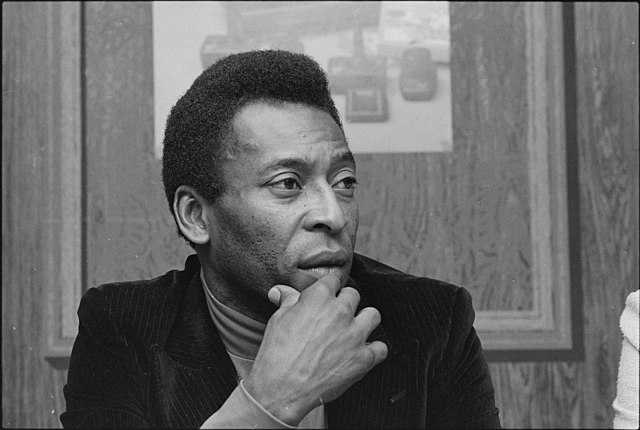 What’s up, galera? Are you ok? On our Dica today, we are going to talk about the Brazilian football player Pelé. Just the best player in history! Let’s talk a little bit about Pelé’s history: his trajectory, first world cup, curiosities, and also his relationships with Xuxa and Maradona! Did you know Pelé played for Santos FC and also New York Cosmos? And that Pelé was only 17 in his first World Cup, in 1958? Let’s dive deeper in this precious footballer’s history.

Edson Arantes do Nascimento was born in October 23rd, 1940 in the city of Três Corações, Minas Gerais. Pelé is the most successful league goal-scorer in the world, scoring 1281 goals in 1363 matches, which included unofficial friendlies and tour matches. During his playing days, he was, for a period, the best-paid athlete in the world. Pelé started his career playing for Santos Futebol Clube, in São Paulo.

While in Santos FC, Pelé was able to show his skills and became really famous all over the world, winning national and international titles. Pelé also won, with the Brazilian Team, the World Cup in 1958, 1962, 1970 (being the protagonist in 58 with only 17 years of age, and in 1970 leading his teammates to the title).

Pelé was the protagonist in almost every match that Brazil or his club Santos played. But we must mention two special matches that are a part of his history and of football history. First, the 1958 World Cup final where Pelé scored two goals being only 17 years old. One of these goals is considered the most beautiful goal of his career. Brazil won the title against Sweden that day. Let’s see the video below showing this amazing moment:

Another special match in his career was in 1969 against Vasco da Gama, when he was able to score his goal number 1000. A remarkable moment that put him in history books forever. This moment was so special that the match was ended right after the goal, the celebrations and emotions were so intense that even his challengers were celebrating with him inside the field. That is such a Brazilian thing, right? 😛

Pelé was the first player ever to reach 1000 goals scored in football history. A very special and unique moment that is celebrated even nowadays in Brazil and around the world. The most amazing thing is that he was only 29 when he did it, he still had more goals and more titles to come, but this is indeed the most important one.

Pelé and the New York Cosmos

The footballer retired on October 1st, 1977 playing for New York Cosmos. The team always wanted to sign Pele as a player, but that didn’t happen until 1975. Pele was considered as famous as the Pope (yes, the one from the Vatican!). He was responsible for popularizing the sport in the United States, as well as bringing the New York Cosmos to the peak of their existence as a team. On Pelé’s farewell tour in 1977, the Cosmos made history by becoming the first Western professional soccer team to play in China!

Most Important Titles with the Brazilian Team

Most Important Titles with Santos FC

That’s it my friends! Now you know a little bit more about the Brazilian football player Pelé. Pelé was not only important because of his World Cup victories (even the most famous – 1958), but also because he made Brazil even more famous for our football! If you want to know more about Brazilian football and players, go to A Dica do Dia or send us a tweet to our Twitter account asking questions or making suggestions.