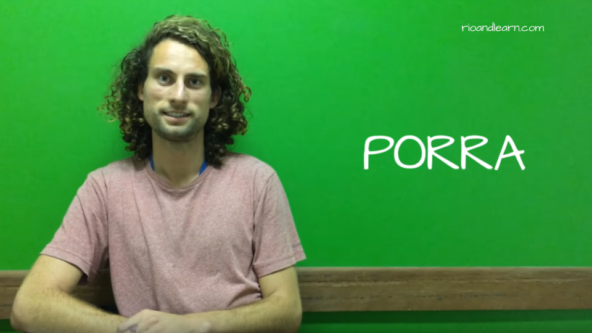 Hi there! If you ever listened to a carioca talking, I’m sure you will have heard the word porra before. But what does porra mean in Portuguese? Well, today we will finally learn exactly what this word means and the contexts in which we can use it in our daily lives. So, let’s check out porra in Portuguese today!

Meaning of Porra in Portuguese

When you take a look at the Portuguese dictionary, you will see that porra has five different meanings. And those meanings explain a lot about how we use this word. Check it out:

But most people in Brazil use this term as a swear word, even though it’s considered a rather common one (albeit not that shocking).

How to Use Porra in Portuguese

When You Are Angry

Now imagine Diogo and Igor are trying to watch a soccer match on the tv, but the remote doesn’t work:

Ok, the tv is on now, and during the game Diogo is suddenly very excited:

To Express Pain or Frustration

You know that moment when you feel so much pain or frustration that words cannot express? Well, porra is the perfect word for it.

Here in Rio you’ll notice that cariocas use this word a lot. They use it as comma when they are talking to friends. Take a look:

Learn More with Our Student

Let’s check out the explanation from our buddy Tim, who is here to show you how to use this versatile word!

Tim is one of our students that came to Brazil to learn Portuguese. But if you don’t have the availability to travel right now, have you thought about taking online classes?

2 – Aporrinhar: This one is a verb derived from porra! It means when something or someone bothers you. It is a regular verb, if you are wondering! Example:
Ele me aporrinha muito!
He nags me a lot.

4 – Porre: This variation has two different meanings. It can refer to drinking a lot. It can also refer to someone or something that is highly annoying. Examples:
Eu tomei um porre ontem, bebi quase um litro de caipirinha!
I got drunk yesterday, I drank almost a liter of caipirinha!
Nossa, aquela garota é um porre!
Wow, that girl is so annoying!

Well, that’s it for today guys. Hope you love this Dica! Don’t forget to subscribe in our Youtube Channel.
Tchau!