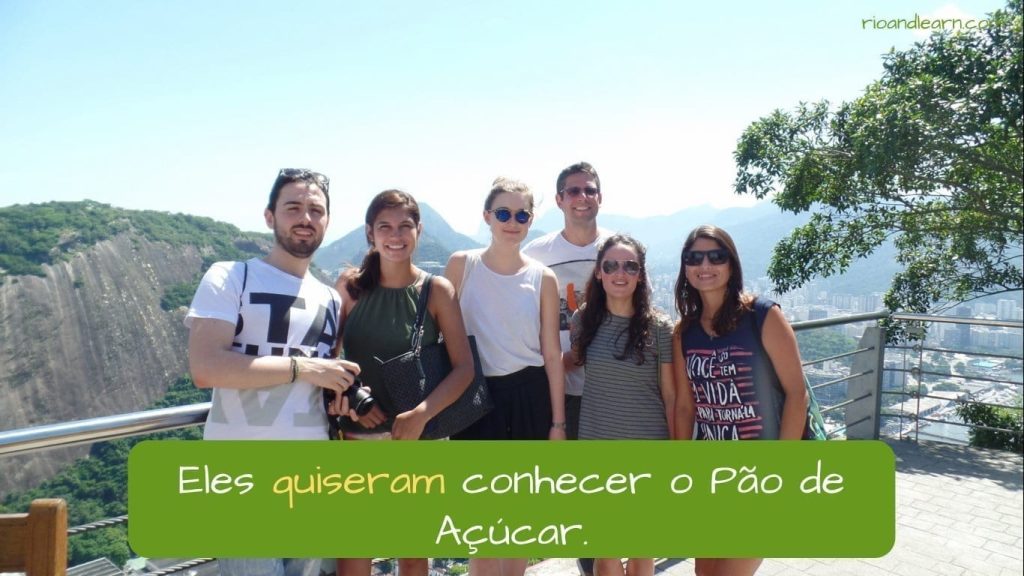 Hi! We all know Irregular Verbs are a tricky part of learning any new language, right? We can’t memorize all of them! So come with us and let’s learn about Portuguese Irregular Verbs in today’s Dica! It will certainly help you!

What are the Portuguese Irregular Verbs?

Portuguese irregular verbs are special cases that modify the root of a word or its ending, changing their form almost completely and they don’t following any rules!

Okay, let’s understand it divided into parts. What is the root of a word? When we talk about verbs, for example, we know that they are divided in parts. The root is the main part of the verb, the most important, that characterizes its meaning independently from the tense that you are using or the person. Let me give you an example.

Let’s take a look at the regular verb amar (to love). The root of this verb is am, in this case the letters ar are there to say that the verb is not conjugated, that is, it is in the infinitive form. Everything that we put after the root of the verb, in Portuguese, will have specific goals and classifications. But don’t worry, the other classifications don’t matter to you right now (only if you are a nerd like me that actually likes to study grammar, if this is the case come do an online Portuguese class with us and we can talk deep nerdy grammar hahaha.)

Now you understand what the root of the verb is. The irregular verbs are ones that, when conjugated, have changes in their root or endings. That is, you can’t just add the ending that you would expect, you have to change the main part of the verb, this is exactly what we are going to learn today.

Just like Regular Verbs, the irregular verbs are also divided into three conjugations: -AR, -ER, -IR. Let’s check them out one by one!

Let’s take a look at  some irregular verbs that end in -AR. First we are going to learn the main conjugations of the verb estar.

This verb is super irregular and the best way to learn the simple past is memorizing it. But one thing that can help you to conjugate the plural forms is taking the part of the verb (estive-) and then add the endings (-mos,-ram,-ram). Notice that in the singular form you have to memorize it, and to put in the plural you just copy the conjugation of the first person (eu) and then you add the specific terminations of the past.

To learn the imperfect past of irregular verbs, read all about it in this Dica.

Take a look at some other Irregular -AR verbs:

With these 3 verbs we are going to do like this.. In the present form we have to memorize it, there’s no other way because each of the irregular verbs change in different ways. So check the links above to know the conjugation of the present.

With the verb odiar, we can do something similar, but the ending will have an o or an a instead of an e. And the part that doesn’t change here would be odi- .Take a look:

Click here to learn the imperative form of the irregular verbs and expand your vocabulary!

The verb passear will have the same logic as the verb odiar. And the part that doesn’t change here would be passe- .This is not a specific rule, is just something to help you memorize.

In the future we can still use the same rule as the verb estar, this tense is not irregular in these verbs either. So, just follow the rules that you already know about future for regular verbs.

Don’t forget to to click on the links above to learn the irregular conjugations of these verbs.

Take a look at the examples using the irregular forms of the verbs.

Eu estive em Salvador no ano passado!
I was in Salvador last year!

Now let’s learn some irregular verbs that end in -ER. To begin with we are going to learn the main conjugations of the verb fazer – that is super irregular and important to know.

Notice that we are talking about the main 3 conjugations of every verb: the simple past, the present tense and the future. To learn the complete conjugation of the verb fazer in Portuguese, click here.

Take a look at some other Portuguese Irregular Verbs with -ER:

Take a look at the plural forms of the verbs saber, dizer and querer in the past:

To put them in the future form, the verbs saber, querer, and caber, can follow the rule we told you before of verb in the infinitive form + future terminations (-ei, – á, -á, -emos, -ão, -ão). But with the verbs dizer and trazer, we can’t use the infinitive. Take a look:

Notice that we still use the same endings, but the part of the verb that does not change is different: dir  for the verb dizer and trar for the verb trazer.

Don’t forget to click on the links to see the complete conjugation of these verbs!

Take a look at the examples below using the irregular forms of the verbs.

Eu soube pelo jornal.
I knew from the papers.

If you want to take a look at a general verb table, read our Dica of Portuguese Verb Conjugation, there you can also see that the verbs divided between regular and irregular.

Let’s move on to the verbs that end in -IR. Of course we also have irregular verbs in this category.  So, take a look at the conjugation of the verb pedir:

With these 4 verbs above, in the simple past, you can copy the form of the first person and then add the endings -u, -mos, -ram, -ram. Take a look:

In the present form, is always more tricky, so you’ll have to know the verbs. However, to put them in the future form, we can use the same rule as the other examples: verb in the infinitive form + future terminations (-ei, – á, -á, -emos, -ão, -ão).

To learn how to transform the verbs into their subjunctive form click here. The subjunctive is very important when it comes to really speaking Portuguese.

Take a look at the examples using the irregular forms of the verbs.

Eu ri porque foi engraçado
I laughed because it was funny

Eu me cubro sempre que chove.
I cover up whenever it rains.

And that’s it! Watch out for Portuguese Irregular Verbs as they can be a little tricky, but you can always come here for help!

To practice more and see all the conjugations, download this document and let’s study!

Stay tuned for our next Dica do Dia here at Rio & Learn, tchau tchau! And if you miss us, say hello to us on Facebook!

Click on the links below to see more related Dicas