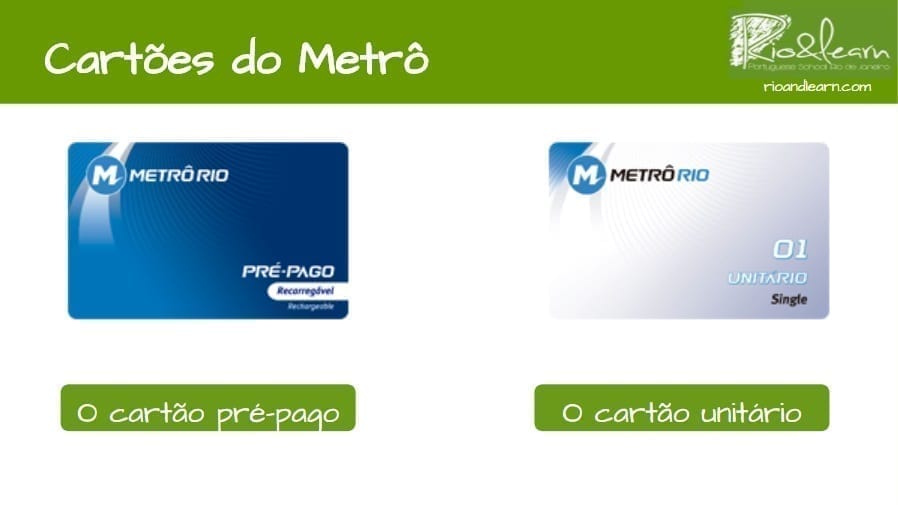 So you are coming to Rio de Janeiro and want to move around easily while also paying a cheap price? The best way to do it is by using the Rio de Janeiro Metro. So in today’s Dica let’s learn about the Rio de Janeiro metro lines, its map, prices, and some of its most famous stations: the Copacabana, Ipanema, Leblon and Barra da Tijuca stations!

To walk like a true carioca you have to master the art of using the Metro in Rio de Janeiro.

Well, some Brazilians think that the metrô in Rio de Janeiro can be a little challenging for foreign people , but don’t worry, friend, we’ll help you with that along with the Rio metro map!

The Rio de Janeiro subway is perfect to take you to all zones in Rio, because at the metro there are lots of stations. From Barra da Tijuca in the West Zone to Pavuna in the North Zone of the city. You just need to know which lines you are going to need.

Don’t worry, the Rio Metro map is not hard to understand, you just need to know the main name of the nearest station of the point that you want to go! So if you are going to places such as Ipanema and Copacabana, you can use Linha 1 (orange), and in case you are going to São Cristóvão or Maracanã then you need to use Linha 2 (green). Linha 4 (yellow) was recently finished for the Olympics and it’s a great option if you want to visit Barra da Tijuca.

Here is the Rio de Janeiro subway map for you to take a look: 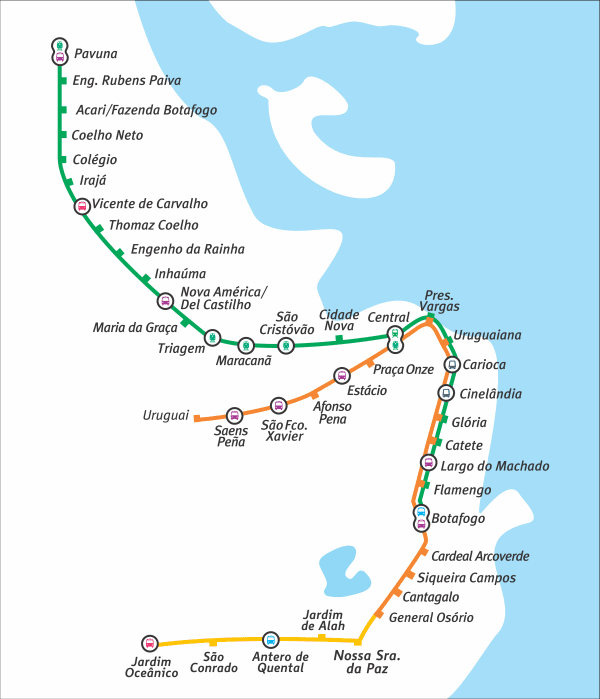 Places to go by subway

The subway can take you to lots of interesting places, from beaches to Central do Brasil where the famous movie of the same name was filmed and where you can take the train to different parts of Rio. Well, and if you want to be near of our school, it’s very easy too! The subway in Rio de Janeiro, at the metro in Copacabana, can take you there! But if you also want to know other famous places in Brazil, there are other stations at the Rio de Janeiro metrô, like in Ipanema, Barra da Tijuca and Leblon! 😉

Let’s see the places that we can go:

Ok, now you know what to do. But how do we use the subway in Rio? That’s quite simple!

Let’s learn how to buy Rio de Janeiro Metro tickets, it’s very easy! To go through the turnstile you have to use the Metro card that can be Unitário (single journey) or Prepaid.

The subway card and its price

The Rio metrô prices have changed a lot, but now the Unitário card costs 5,80 reais which is also the minimum amount to recharge the Prepaid card. Passengers above 60 years old can use the subway and other public means of transportation without paying a fare, but they must show to the subway security some kind of ID with a photograph!

Another good option would be to buy a Bilhete Único or  a RioCard Mais that It’s a card that can be used in different means of transportation within the city. The price of the card costs 4 reais plus the ticket you will use: if it is by bus, 8.05 reais, if it is by subway, 9.80 reais. And once you make the initial recharge, you can recharge whenever you want and the money will accumulate on the card.

It is important to remember that the machine from which you will buy your card does not provide change if you pay in cash.

You can also buy the Giro card. It’s a card that you can recharge online as well as track your expenses to see how much you have left. After recharging it you only have to validate it in a machine inside the subway station (you’ll see where… there’s a sign, hehe, and it’s often next to the ticket machine). The worst feeling ever is having to wait in a long line to recharge your card, right? With Giro you don’t have to wait in line!

You can use the subway almost any time, just be careful if you are going to party in Lapa and have to come back late at night. Here is the schedule of the subway in Rio.

Don’t you know the Copacabana fireworks display?  Or the Barra da Tijuca’s? Well, it’s amazing! The best way to get to these places is by subway!

So if you are thinking about spending the New Year in Rio, pay attention to the tickets. You can imagine how Rio de Janeiro looks on this date, right? The city is soooo crowded! So, don’t even think about taking a bus, uber or taxi to get around the city!

The Rio de Janeiro Metro offer a special ticket for this time of the year. You can buy it in specific subway stations. This information will be posted on MetrôRio’s website, so stay tuned! It’s very important to buy these tickets in advance because on New Year’s Eve some stations will not accept the regular cards, but usually only the popular NYE locations.

Did you know that our school is really close to a subway station? You just need to take the subway to Siqueira Campos and walk a couple minutes towards the beach. It’s very easy to find!

We invite you to come by subway and meet us at Rio & Learn. We’ll be waiting for you!
Bye bye!