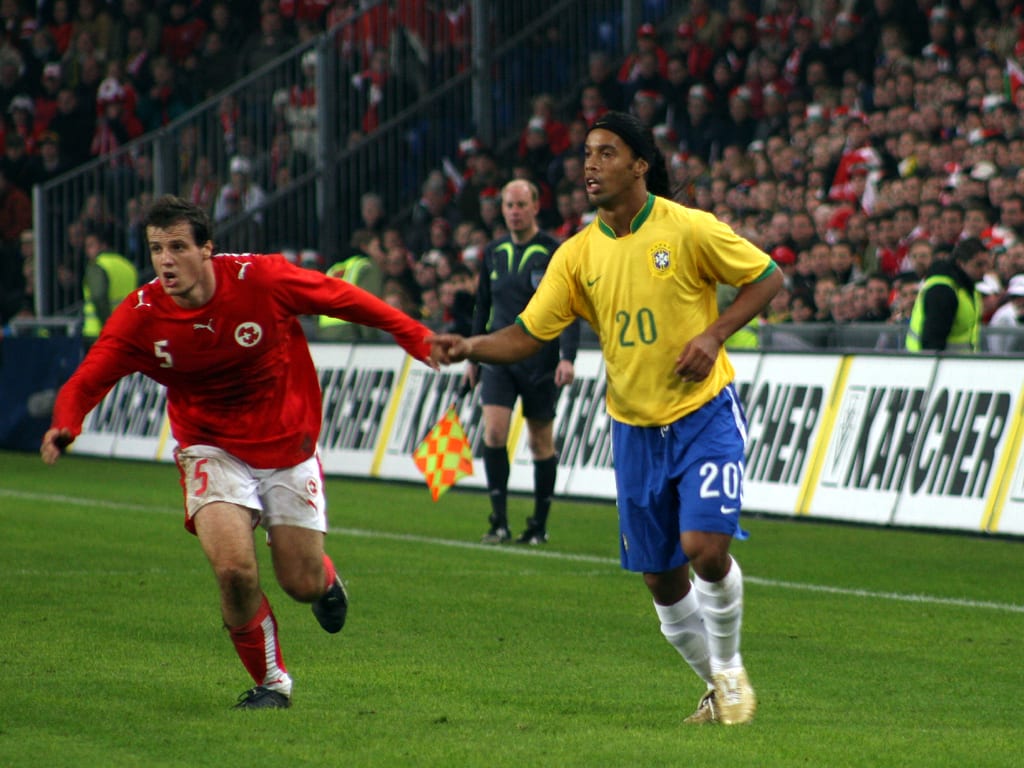 Hey, galera?  You all ok? Today in our Dica we are going to talk about the Brazilian soccer player Ronaldinho. Or Ronaldinho Gaúcho for many Brazilians.

Ronaldo de Assis Moreira was born on March 21st 1980, commonly known as Ronaldinho Gaúcho, he is a, now retired, football player who was very successful wherever he played. Winning many different titles, including the FIFA World Cup in 2002 with the Brazilian Team and also personal titles such as FIFA’s Best World Player 2004, 2005 and Ballon d’or 2004, 2005. He is widely known as Ronaldinho, but in Brazil most people call him Ronaldinho Gaúcho since Ronaldo was also playing back then and had the same nickname, Gaúcho is the Brazilian expression for people from Rio Grande do Sul and was used to distinguish the two players.

He started his professional career in 1997 playing for the Brazilian team Grêmio, where he played for four years, leading to a spot on the Brazilian Team which then went on to win Copa America in 1999 when he caught the attention of international teams. In 2001 he headed to PSG Paris Saint-German and played for two seasons, he didn’t win many titles there but scored 25 goals in 77 matches. In 2003 Ronaldinho moved to FC Barcelona where reached his prime, he won various titles such as two national leagues (2004-2005, 2005-2006), two super cups (2005, 2006) and one UEFA Champions League (2005-2006). Besides his titles, he amazed people all over the world with his passes, dribbling and of course his goals. He started the season in 2008 playing for AC Milan where he played for three years and winning the league in his last season there (2010-2011).

After playing for AC Milan he also played for the Brazilian team Flamengo for one year and won the state championship. After playing for Flamengo he headed to Atlético MG where he was also really successful, playing for Atlético he won Taça Libertadores da América, the most important tournament in South America, giving his team its first title in history. Ronaldinho later also played in Mexico but without the same success, but his goals and skills won’t be forgotten. Let’s see some of them:

Ronaldinho With The Brazilian Team

Ronaldinho had a really successful career playing with the Brazilian Team. With 97 appearances and 33 goals, he won some important titles such as Copa America 1999 and the Confederations Cup in 2005, but being part of the team who won the FIFA World Cup in 2002 was the highlight of his career. With players such as Ronaldo and Rivaldo, they led the team through the tournament. One of his most stunning moments was his goal against England where he scored with a long pitch free kick, take a look:

Some Curiosities about Ronaldinho’s Career

That’s it, my friends! Now you know more about Ronaldinho the football player! To learn more about other Brazilian players, check out our website Rio & Learn! And if you want to play some soccer with us, we have a RioLIVE! for that!

Answers to the exercise: