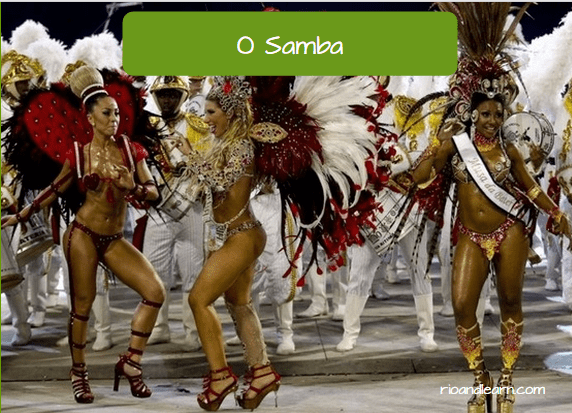 Hello friends! Today, we are going to talk about Samba in Brazil!

Samba is the name of a dance and a musical genre, and it’s one of the elements that most strongly represents the Brazilian popular culture in several parts of the country. We have several types of samba in Brazil, and each type has its own preferred instrument. The music can be played with violão, viola, or cavaquinho, and percussion instruments like atabaque, berimbau, chocalho e pandeiro.

History of Samba in Brazil

Samba was introduced in Brasil in the colonial period of our history by the Africans who were enslaved. Therefore Samba in Brazil was born from a mix of Brazilian culture and African culture. Samba was originated from the sounds brought by the enslaved Africans that came to Brazil. The biggest association of these sounds were with religious elements that could create a ritual communication between music, dance, instruments, and movements of the body. In doing so these sounds and rhythms were slowly incorporating other elements of music, especially in Rio de Janeiro it the XIX century.

Speaking of that, have you ever heard of Pedra do Sal? Pedra do Sal is a big rock under the Morro da Conceição that was known as Little Africa. This name is because it was where many of the slaves were bought and traded. You could also find terreiros de candomblé and quilombos there. The name Pedra do Sal was given because the ships came to the port and discharged the salt there. Nowadays, Pedra do Sal is a symbol of Samba in Brazil. This place is very important because it is where Samba in Brazil was born. You can go there to enjoy a nice roda de samba where you can listen and dance to the music while watching people play it live, on Mondays and Fridays.

As a result of its connection to black culture, Samba in Brazil was criminalized and is sometimes still seen with prejudice, but this is changing more and more each year. Even so, today the whole world recognizes Samba in Brazil as a symbol of our country and our Carnival. This type of music is one of the most popular Brazilian cultural expressions and that’s why samba has become an icon of Brazilian national identity.

Finally, watch our vídeo Dica to learn much more about Samba in Brazil!

We hope you liked learning a little about Samba in Brazil and its history.
So, check out more about our school at our Facebook and Instagram!
See you in the next Dica!