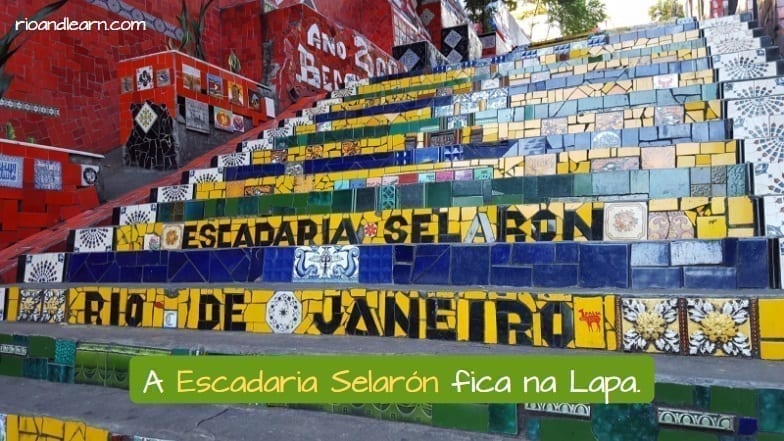 Today we’ll visit one of the most simple and beautiful places in the Marvelous City.
Let’s study Portuguese with history of the Selarón Steps in Rio de Janeiro.

The Selarón Steps, or as we call it, Escadaria Selarón went through a renovation in 1990. Before this it was just a normal stretch of steps between Lapa and Santa Teresa but, one man named Jorge Selarón decided to decorate them. Lapa is a bohemian neighborhood of the Central Zone of our city and Santa Teresa is a neighborhood located on a hill with a great view of the city.

Jorge Selarón was a Chilean painter and ceramist that moved to Rio de Janeiro in 1983. He decided to renovate the steps in front of his house in Lapa as a gift to Brazil. He first started using the colors of the Brazilian flag, but then he found out that in Praça XV, at the center of Rio de Janeiro, he could buy tiles from all over the world. So, he had the brilliant idea of buying these tiles and using them to decorate the stairway. 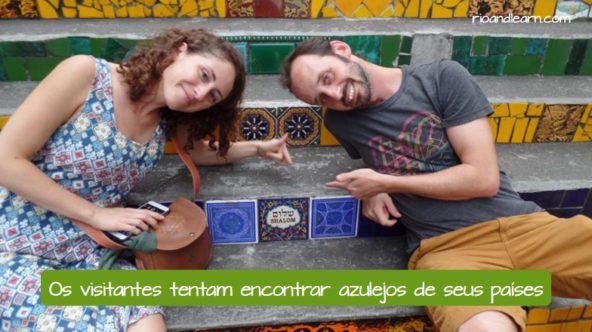 The idea was to create a continuously changing work of art, full of life and transformation. And so he did! This amazing work of art came to an end and remains as it was in 2013, today people visit the stairs with the challenge to find a tile from their own country.

There are 215 steps and the stairway measures 125 meters. Can you imagine how many tiles there are?

The artist behind this masterpiece, Jorge Selarón, was born in a small town near Viña del Mar and Valparaiso. At the age of ten, he visited Buenos Aires and decided that he wanted to discover the world. Fleeing from the Chilean dictatorship, he traveled a lot, visiting 57 countries, until he decided to live in Rio. Inspired by the Guell Park, in Barcelona, he began to decorate the staircase near his house. Over time, it started to become recognized and visited by tourists, until it grew to be the phenomenon that it is today.

The woman in his work

It’s possible to find, in different parts of the Selarón stairs, the painting of a pregnant woman. When asked about her, he replied she was related to a personal problem in his past.

At the time of the dictatorship, Selarón left his pregnant wife behind and later knew about her death. Therefore, this painful fact may explain his obsession with the pregnant woman repeatedly presented in his works. Along with the images of the pregnant black woman, there are usually names of friends, artists, composers, athletes etc…

There another is a mystery surrounding the end Jorge Selarón’s work. The painter was found dead on the Santa Teresa Convent Staircase on a sad Thursday morning in January, 2013. Even today nobody knows exactly what happened. There are theories that a former employee was threatening him in 2012.

Finally, did you know that many famous artists came to Rio to see and shoot film footage on our incredible steps? Do you remember the song Beautiful by Pharrell Williams and Snoop Dogg? The video was recorded in different parts of the Marvelous City and at the end of the video you can see the Selarón steps. Check out this video of Pharrell and Snoop Dogg here:

You can visit the Selarón Steps in Rio de Janeiro on our Santa Teresa RioLIVE! and try to find a tile from your country!

Thank you for watching our video and most important, thank you Selarón for your incredible work!
Go to our Facebook page to see pictures of our stroll up the amazing Rio Steps.
See you in our next Dica!