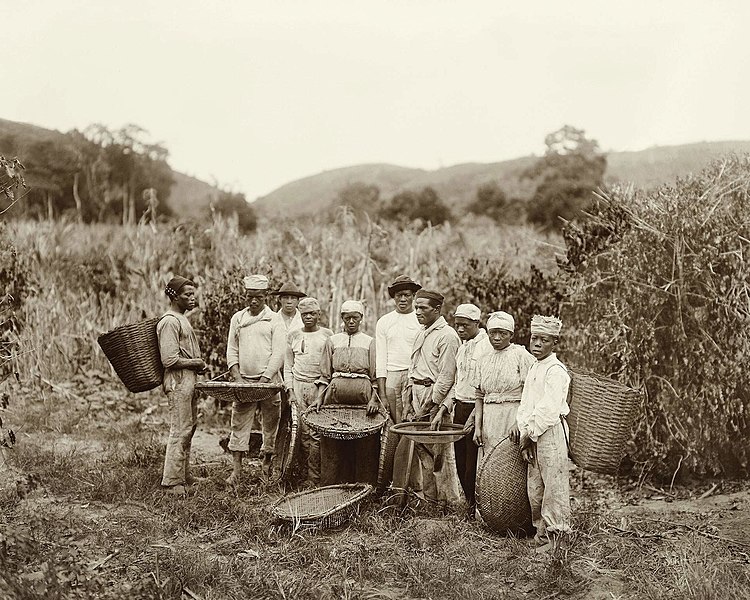 About Slavery in Brazil

The first thing you should know is that slavery did not impact only those of African origin. When the Portuguese came upon the Native Americans, they thought they did just fine as human cattle and used them to help them build cities – great ones even, like Rio de Janeiro. African slaves only began to be brought to Brazil around the mid 16th century – a good forty years or so after the discovery of Brazil.

History of Slavery in Brazil

If there is one place where slavery was prominent, it was on big farms known as plantations – what we often call engenho in Portuguese. Initially, the main produce of Brazil was sugarcane and its derivatives, such as sugar, cachaça and melaço. Later on, as Brazil developed as a country and nation, sugar was replaced by gold and then by coffee. Coffee plantations are what most Brazilians think about when the subject arises. That is because those were extremely prominent in the 19th century and by then slavery in Brazil had images to show for. The picture below is one of those. 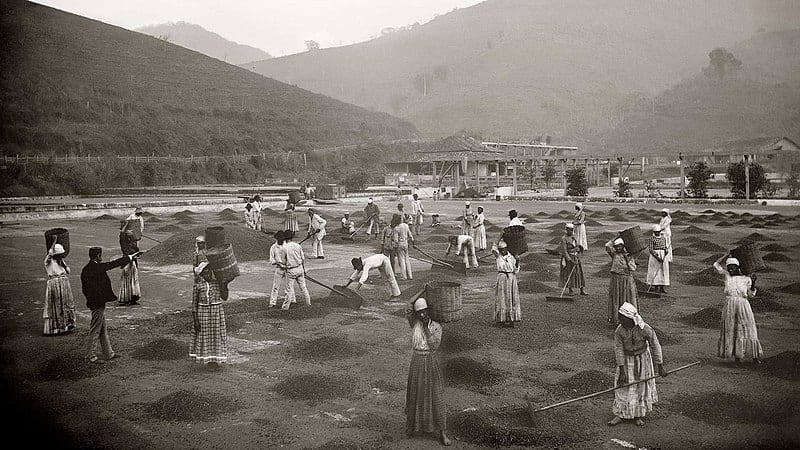 The Trip From Africa

African slaves were brought by sea, being branded with hot iron to identify their owner, and crossing the Atlantic in overpopulated ships with almost no food. The conditions in those ships were horrific, and many people perished during the trip, being carelessly thrown to sea, so the slave traders could sail faster to their delivery point. The poem Navio Negreiro by Castro Alves, a famous 19th century Brazilian poet, depicts the horrendous scenes found in such a ship. 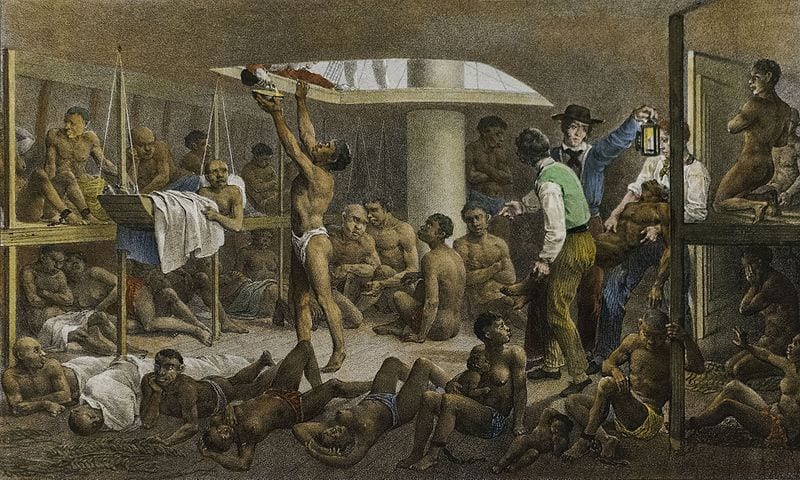 Life in Brazil and Slavery

Upon arrival, families were separated, people were taken care of, and then put to sale. Grown strong men fetched a higher price – they could easily work cutting sugarcane, picking coffee and doing fieldwork in general. “Luckier” people would get to work in the casa grande (big house) – where the owners of the plantations lived. Housework was generally seen as preferred, since mistreatment wasn’t as common or as severe as out in the field. The painter Jean-Baptiste Debret became very well-known for depicting slavery in Brazil in images such as the ones below. We did promise you a photo history of slavery in Brazil, didn’t we? 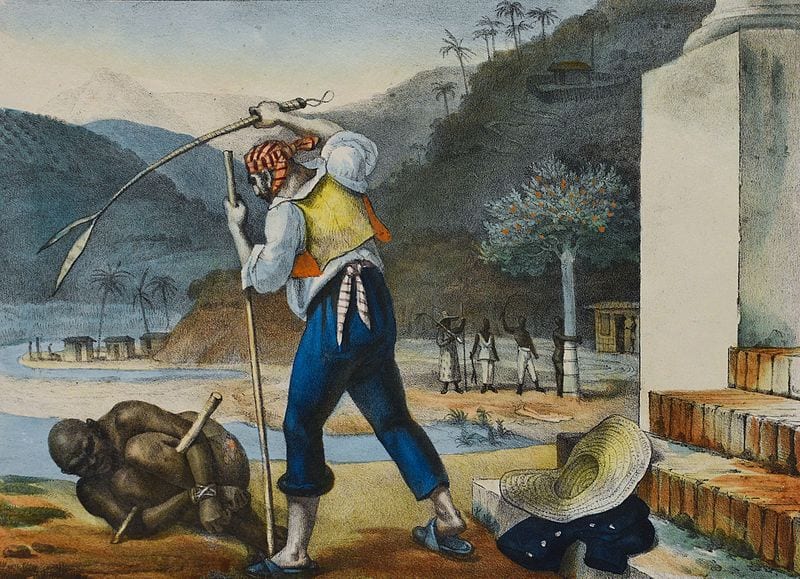 Overseers punishing slaves on a rural estate – J. B. Debret 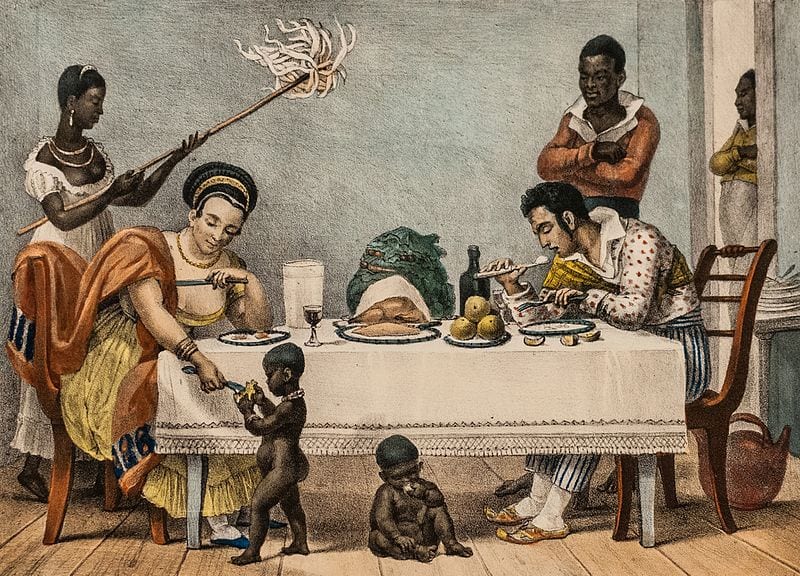 Pastimes after Dinner – J. B. Debret

Abolition of Slavery in Brazil

The 19th century was full of turmoil with regard to the abolition of slavery in Brazil. Artists, poets and the such began to use their mediums to criticize Brazil’s slave trade and slavery laws. The abolitionist movement, however, albeit loud and effective abroad, took decades to see any results here. The first move towards this was in 1850, when Brazil’s slave trade oversees legally came to an end. From that day onward, the slave trade could only occur within the territorial borders of Brazil. This was the beginning of the end of slavery in Brazil.

Around the 1870s, seeing all its allies take steps towards freedom, it was clear that the end of slavery in Brazil had to be just around the corner. As slavery in Brazil became the main topic of discussion, Alberto Henschel, a German-Brazilian photographer, decided to shoot portraits of slaves, giving a face to the people they sought to defend. Those portraits have recently been colored, and you can check them out here. With that, political activists such as Joaquim Nabuco began to put more pressure on the government to free all slaves. He is famous for the quote:

Não existe liberdade ou independência em uma terra com um milhão e meio de escravos.
There is no freedom nor independence in a land with a million and a half slaves.

Several laws were passed slowly freeing children of slaves, slaves that were 65 or older, and so forth. And the country waited for the opportunity to see all men free. In 1888, the Brazilian Senate finally passed the Golden Law (Lei Áurea) that marked the end of slavery in Brazil. The moment was recorded in history, as a crowd gathered all around the senators, witnessing this historical moment in Rio. 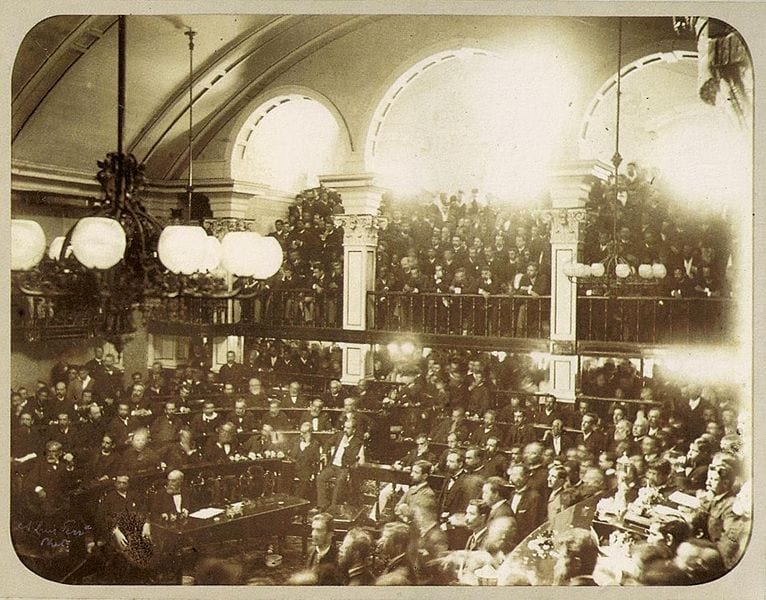 This wasn’t the end, though! Part of the whole bureaucracy of the abolition in Brazil was to have the approval stamp of the royal family. They needed the emperor or his heir to sign the Golden Law, so it could be official. The Golden Law was signed on May 13th 1888 by Princess Isabel, now known as the freer of slaves, at the Imperial Palace in Rio de Janeiro. We don’t have a picture of her signing the law, but we do have one of the crowd outside the palace, cheering their princess. 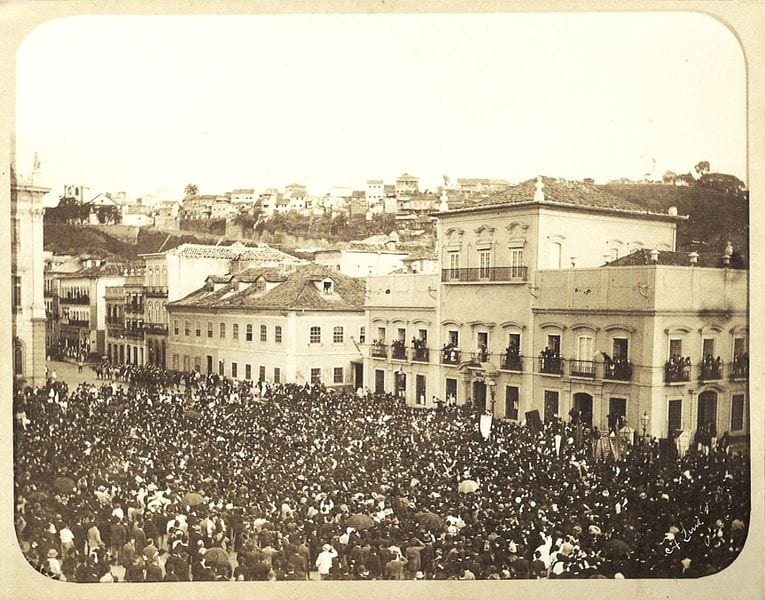 Effects of Slavery in Brazil

The number of slaves brought to Brazil is jaw-droppingly huge. Out of the 12.5 million slaves brought to America, Portugal was responsible for almost 6 million of those. And the numbers are even more alarming when you think about the fact that not all of those people made it to shore. About 12% of slaves died on their way to the Americas – that is one and half million people lost at sea. That’s around the same number of slaves in Brazil by the end of the 19th century.

The effects of slavery in Brazil were also long-lasting. For starters, a year after the abolition in Brazil, there was a coup d’état that dethroned the emperor and instated a Republic that did little to nothing to help freed slaves move on to regular life. Many former slaves continued working in the same plantations they did before being freed. Life in the early 20th century didn’t look that different to them from that of the late 1800s. And if you’re interested, many books have been written about this, including Menino de Engenho by José Lins do Rego.

Nowadays, despite the situation having changed some, prejudice has still not been eradicated. Slavery in Brazil sadly still leaves a mark to this day. But, hopefully, we are walking closer and closer towards positive change.

That’s all! Hope you enjoyed knowing this big piece of Brazilian history. If you want to learn more, why not join us for online Portuguese classes? Maybe we can even read Navio Negreiro and discuss it together!
See you next Dica!

Click in the links below to see more related Dicas:
History of Capoeira in Brazil
History of Brazilian Independence
Candomblé in Brazil