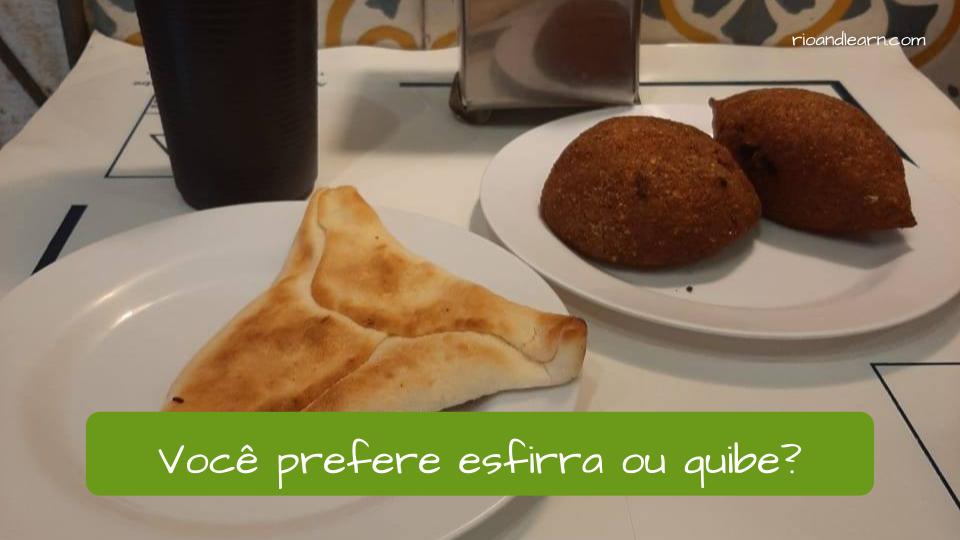 What’s up guys? Today we’re going to talk about the different kinds of snacks in Brazil. From Brazilian chips made out of mandioc to banana pudding, Brazil has a lot of incredible snacks for you to get to know! But when we talk about salty snacks, we have two usual options: baked or fried. Do you think you have any preference between them? Usually do you prefer savory or sweet snacks?

Imagine you are in a hurry: your day was super busy studying Portuguese in Brazil, and it’s time for lunch! But you don’t have time for a full meal, so you choose to go for a Brazilian fast food, right? Brazilians typically eat snacks for these meals, but not the ones you gringos are used to. Below we have a list of some popular Brazilian snacks, or how we like to call them, our Brazilian salgados. In parties, it’s very common to also serve these types of finger food, but in a smaller size, and in that case we refer to them as salgadinhos! 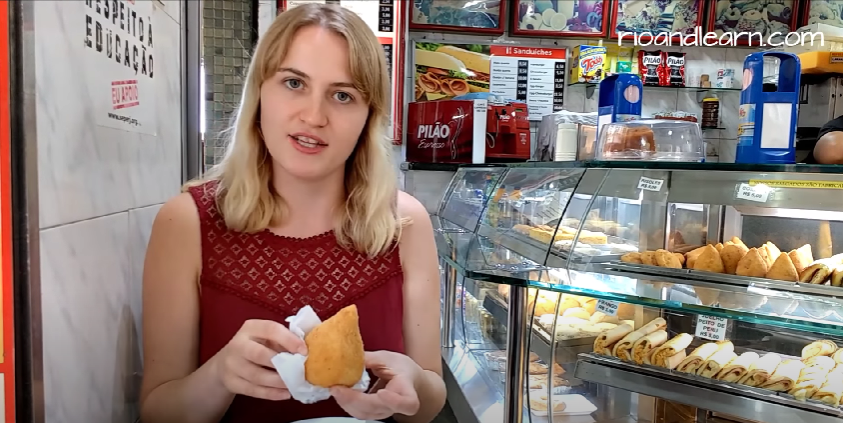 Coxinha is one of the most popular snacks in Brazil. It is made with chicken, covered in a manioc (or cassava) dough and then deep fried. The shape resembles a chicken leg, traditionally it woud be made with the chicken’s leg bone sticking out the top, that’s why we call it coxinha de frango. We love it so much that we also have sweet versions of this salty coxinha!

Pastel is a very famous snack too. We typically eat a pastel at markets and drink a caldo de cana with it; it’s the perfect combination! The pastel is a fried snack made of a special dough and stuffed with beef, cheese, ham or chicken. We also have some different flavors like: brigadeiro and romeu e julieta.

If you are very hungry you can eat a Joelho because it’s delicious and its dough really fills you up. The composition of Joelho de queijo com presunto is dough with cheese and ham inside. You also can eat it stuffed with chicken and cheese. It’s an excellent choice of Brazilian fast food, for when you need to eat lunch, but are in a hurry.

The risole de camarão is a very sophisticated snack, and it’s a traditional recipe of our culture. Risole is made of dough with shrimp and cheese inside, and then it is fried. It’s very popular as a Brazilian salgadinho.

The Brazilian quibe is derived from Arabic food that is well loved in Brazil. You can eat it like a snack, or you can make it bigger like a pie. This snack’s composition is bulgur wheat, miced onions, and meat with Middle Eastern spices. Suggestion: if you want to taste the best Arabic snack in Brazil, you must go to Rotisseria Sírio Libanesa in Largo do Machado. We have a special video just showing this restaurant!

Just like quibe, you may also like Esfirra, it is one of the many loved snacks in Brazil, even though it originated in Arabic countries. Esfirra is a little baked pie in the shape of a triangle or a circle. It can be stuffed with many fillings.

Empada is a snack that never is missing from a Brazilian birthday party. Children love it, adults love it, everyone loves empadinha! This snack is composed of a buttery wheat flour dough, filled with cheese, chicken, shrimp, or whatever your preference is. The dough is so delicious that you can eat a bunch of them without even noticing.

Ok… We stole this snack from the French… But please let us keep it, we really love it! The composition of Croissant de queijo com presunto is dough that is layered yeast-leavened and stuffed with cheese, ham, chicken, or whatever you desire. And it’s a great snack to offer to your friends when you invite them over.

This is one of the most popular snacks in Brazil as well. Bolinho de aipim com carne seca is as traditional as wearing havaianas. It’s a deep fried ball made of aipim (manioc) with dried meat inside. So good!

Pão de batata is a very common snack in Brazil. It’s made of potato flour with cheese and many other ingredients inside. When making pão de batata you can let your imagination flow and stuff it with many different ingredients and spices.

Folhado is a type of savory snack made with puff pastry, usually baked or fried, with different types of fillings. Its a very difficult pastry to make, so when you have the chance to try a good folhado, go for it!

Chips de Mandioca is the equivalent to a Brazilian potato chips but they are made from very thinly sliced mandioca, and then deep-fried until they reach a very rich gold appearance. Sometimes you can find them being sold by popcorn vendors. An also very delicious and sweet option are the chips de banana! Delicious!

Now that you know a lot more about the Brazilian salgados, think about this: which salgado from Brazil would you try without thinking twice? Leave us a comment with your choice, and let’s see which one is the most popular choice! Also, next class, ask your Portuguese teacher which is their favorite salgado! The answer might surprise you!

Exercises about Snacks in Brazil

Observing the gender presented in each sentence, complete them with the appropriate snacks from list below!

I don’t know about you, but now that we’ve studied all these snacks in Brazil I’m starving! So I will buy some snacks! See you soon! Thank you for reading our Dica about Snacks in Brazil. Follow us on Facebook and Instagram to learn more.

Click on the links below to see more related Dicas:
Fruits in Portuguese
Beach foods in Brazil
Brazilian Street foods
Lanchonete in Brazil