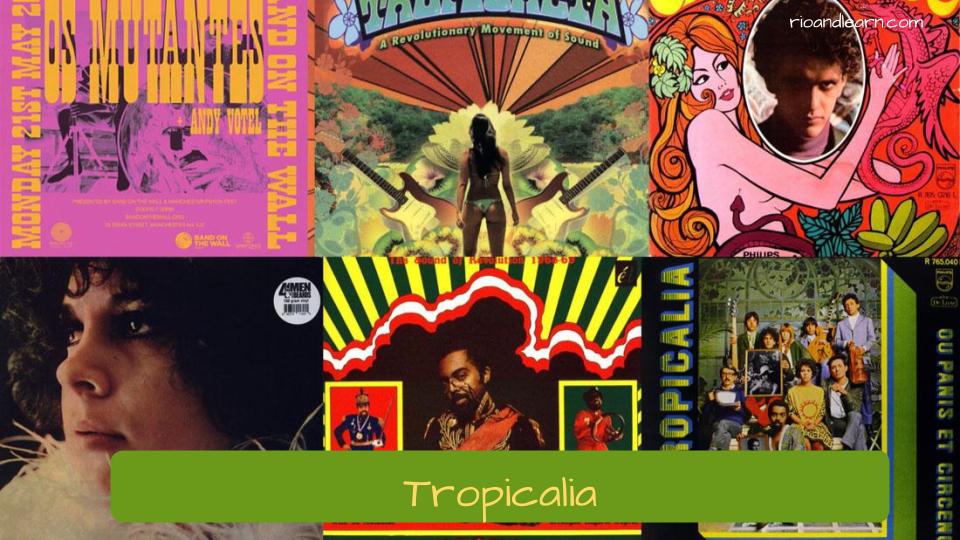 Hi, guys! How are you?
Today, we are going to learn Portuguese online,  while discovering an important movement that happened in Brazil during the Military Dictatorship: Tropicalism and the best Tropicalia albums

Tropicalism, also known as the Tropicália or Tropicalia movement, was a musical-cultural movement in the late 1960s.
It included various fields such as art, poetry, music and theater.

Brazilian tropicalia is commonly associated with the music scene in Brazil. It mixes mixing influences from bossa nova, rock’n’roll, folk, African music, experimental music and fado.
It sought to distance itself from the intellectualism of Bossa Nova,  to bring Brazilian music closer to popular culture, samba, pop, rock, and psychedelia.
The most famous musical artists of tropicalism are:

It was the way to dress, to talk, to support hippies and “new ideas”. Tropicalists did not sing strictly political texts, but the military considered their attitudes such.

Tropicalism was not just a musical movement. It was also present in the visual arts, thanks to Hélio Oiticica, Lygia Clark, Rogério Duprat and Antonio Dias. The term Tropicália derives from the name of a 1967 installation by the artist Hèlio Oiticica. His work inspired by life in the favelas of Rio.

Tropicalism poetry was influenced by concrete poetry, the Brazilian avant-garde poetry.
Among its exponents:

A famous incident with the Brazilian flag, in 1968 determined the end of Tropicalia Movement. During the concert, a flag made by Hélio Oiticica was hoisted with the sayings Seja Marginal, Seja Herói (Be a criminal, Be a hero).
The flag was showing the picture of a famous drug dealer back then, known as Cara-de-Cavalo, who had been violently murdered by the police.
This incident would the perfect excuse for the military could cancel the concert.
Caetano Veloso and Gilberto Gil were arrested, and later freed. After that, they exiled themselves in the United Kingdom.
This incident was considered the end of the vanguardist movement.

Now we know more about this very important Tropicalism movement in Brazil.

A big hug and we will meet again in our next blog Dica do dia.
Or… maybe for a Portuguese Immersion Course in Rio de Janeiro 😉