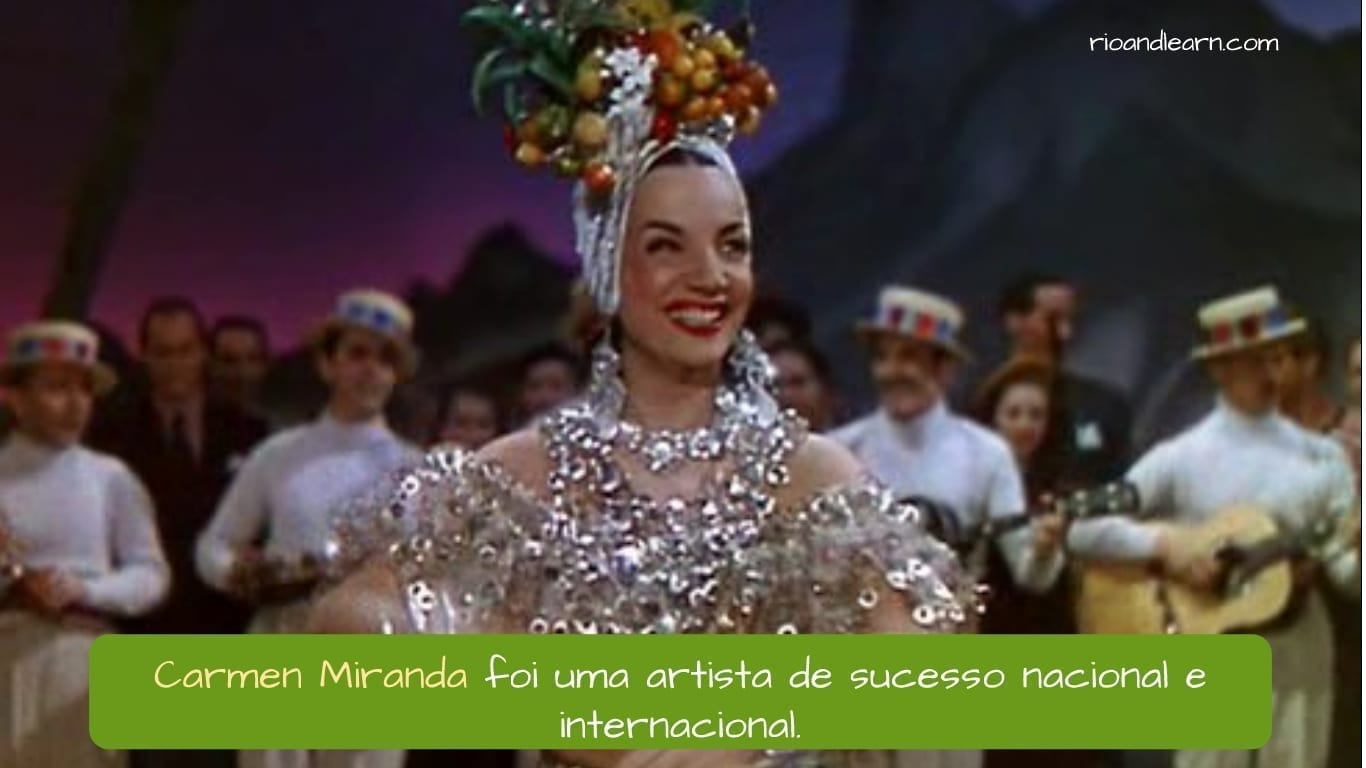 What’s up people!
In today’s Dica, we are going to talk about the internationally-known Brazilian singer Carmen Miranda!

Maria do Carmo Miranda da Cunha was born on February 9, 1909, in Várzea da Ovelha e Aliviada, in Portugal. Her parents decided to move to Brazil when she was still a baby. Even though Carmen Miranda never went back to Portugal, she maintained her Portuguese nationality.

A samba singer, dancer, actress and movie star, Carmen Miranda gained her popularity between the years of 1930 and 1950. Carmen Miranda was a sensation! Her grand trademark was a fruit hat that she would use in her American films.

Before recording her first album Taí (Pra você gostar de mim), with the help of the composer Josué de Barros, a mega hit in Brazil, Carmen Miranda would design hats as young girl.

During the 1930s, Carmen Miranda performed on a Brazilian radio station and made an appearance in five Brazilian chanchadas, which were movies that celebrated Brazilian music, dances as well as the culture of carnival.

In 1946, with the film O Ébrio, by Gilda de Abreu, Carmen Miranda gained international fame. The film worked as an excellent representation of a typical Latino melodrama. The success of the film attracted about four million spectators.

Miranda participated in 14 films between the years of 1940 and 1953. In 1941, she was the first latino-american star to leave her hand prints at the Grauman’s Chinese Theatre (also known as TCL Chinese Theatre) as well as the first South American with a star on the famous Walk of Fame in Hollywood.

Carmen Miranda’s performance popularized Brazilian music and contributed to increasing the public’s interest in Latino culture, as well as being one of the forerunners of the cultural movement known as Tropicalismo in the 1960s.

A museum was constructed in her honor, and in 1955 the documentary Carmen Miranda: Banana is my business about the singer was made.

A star in the sky shines

The beloved Carmen Miranda passed away quite young, with only 46 years of age, on August 5, 1955, but her music and her legendar fruit hat will always remain in our saudade with the eternal question: what does a baiana have?

That’s it, guys!
Now we know a bit more about one of the most notable icons of the Brazilian culture, the great Carmen Miranda.

Till next time, galera!
Bye!