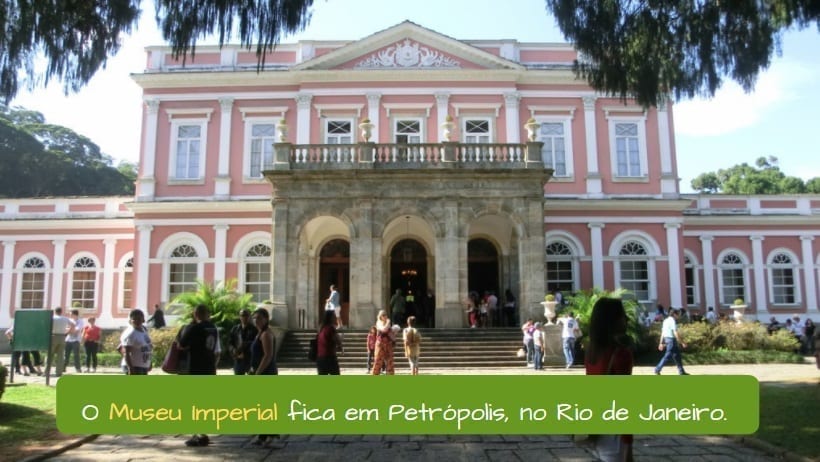 Hello everyone! On today’s Dica we are going to talk about the Imperial Museum of Brazil!

The Imperial Museum of Brazil

The Imperial Museum of Brazil is one of the most visited museums in the country and it’s located in a city called Petrópolis, in the state of Rio de Janeiro.

Dom Pedro I, the emperor of Brazil bought a farm, know as Fazenda do Córrego Seco. His intentions were to build a palace in the land, but due to political crisis in Portugal, he had to go back to his country and left the land to his son Dom Pedro II, as an inheritance.

The architecture of the museum is classified as neoclassic with beautiful gardens and important monuments. Nowadays, the museum presents a huge historical collection that tells us so much about the history of the Imperial family, with amazing pieces of furniture and beautiful paintings. Anyone can visit it, but when you enter the museum you must wear special shoes, not to scratch the more than 150 year old floor. Don’t worry, you’ll receive the shoes in the entrance.

The museum has been opened for visiting since 1940 and you can go there from Tuesday to Sunday, from 11a.m until 6p.m. The tickets cost R$ 10,00 but if you are a student, teacher, or more than 60 years old you can pay half the price.

If you want to know more things about the Imperial Museum of Brazil, come with us in our RioLIVE! Petrópolis!

See you soon!
Hugs and Kisses from Rio & Learn.