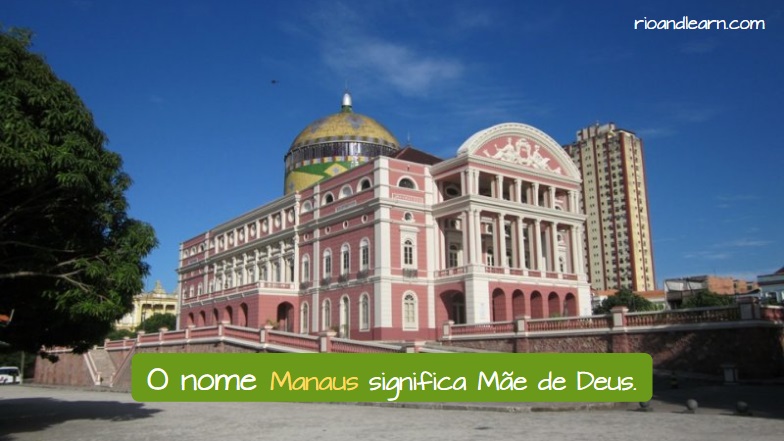 Ready to keep traveling around Brazil?
So, let’s learn more about Manaus City in Brazil.

Because of its speacial location, the city was popularly called Coração da Amazonia (Heart of the Amazon) and Cidade da Floresta (City of the Forest). Manaus is the largest city in the north of Brazil and it has 2,1 million inhabitants, and it is the 8th most visited place by tourists.

Manaus was founded in 1669 by the Portuguese and has had many different names. The first one was Forte de São José do Rio Negro, but at that time, it wasn’t considered a city yet. Almost two hundred years later, in 1832, it was elevated to town and given the name Manaos in honor to the native Indians who lived there. In October 24th, 1848 it officially became a city and it was called Cidade da Barra do Rio Negro, but 8 years later it changed to the current name, Manaus, which means Mother of God.

Here in Rio de Janeiro, on November 15th, 1889, Brazil was proclaimed as a Republic and at that time the demand for rubber increased world widely, and the state of Amazonas, which was one of the main producers in the world, started to receive lots immigrants and migrants to work in industries.

Until today, the economy of Manaus is really strong in the industry sector, but there has been a great increase in the trade sector as Manaus exports fish, Açaí, Cupuaçu and the famous Brazil nut.

Zona Franca de Manaus (Free Trade Zone) is one of the main industrial centers in the country. It was created in 1967 by the government, and the idea was to have an economic zone free of taxes to encourage the commerce in the region and integrate the city with the rest of the country.

The free trade zone also exports products to several countries in world such as Argentina, Venezuela, Colombia and Mexico here in Latin America and India, Hungary, German and The Netherlands.

Check True or False for the affirmations below:

That’s all for today, guys.
Hope you get all the answers right. If you want to learn more about other Brazilian cities, subscribe to A Dica do Dia.