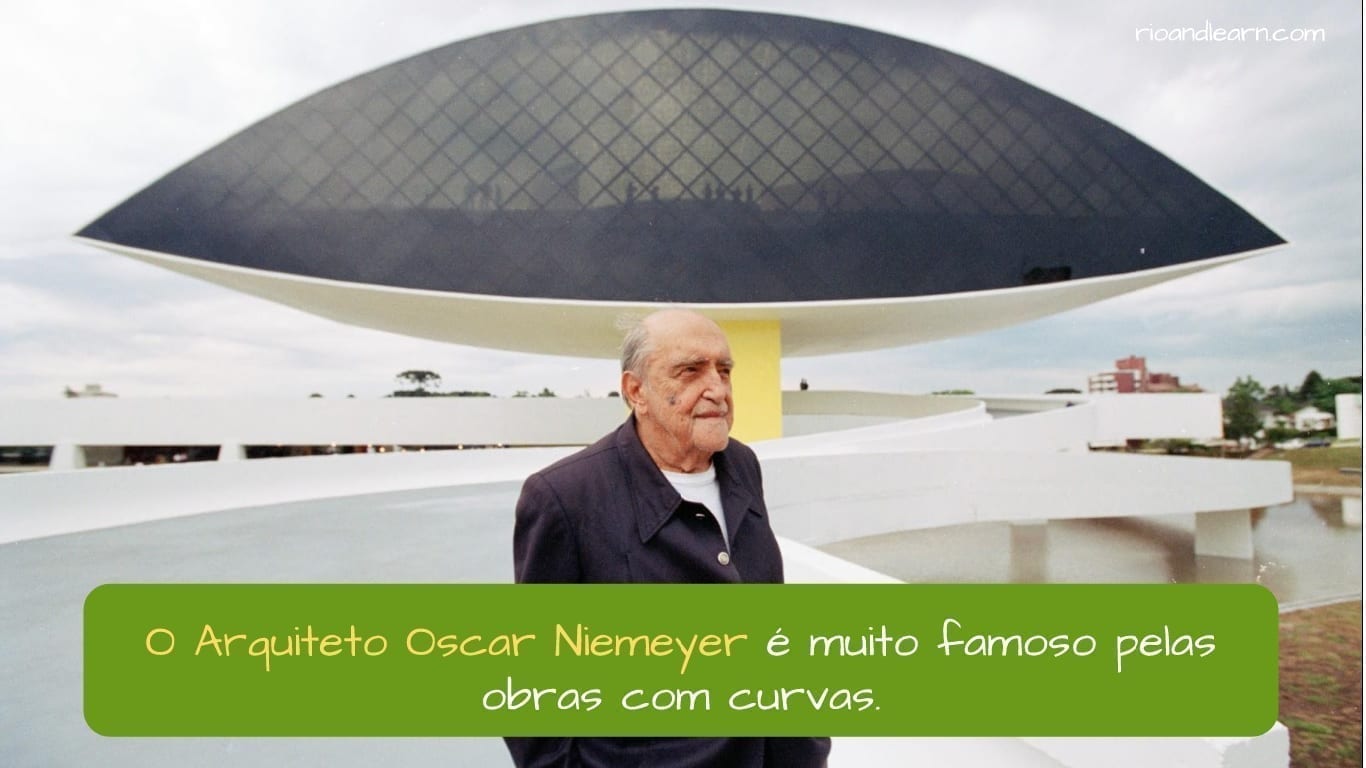 In our Dica of today, we’re going to talk about the famous architect Oscar Niemeyer.

Oscar Niemeyer, the architect of the curves

Oscar Ribeiro de Almeida Niemeyer Soares Filho was born on December 5th, 1907 and was an important architect in the development of modern architecture.
One of his best-known works is the civic building projects made for Brasilia, the city that had been planned to become the capital of Brazil in 1960. The architect Oscar Niemeyer also had participation in the group of architects who designed the headquarters of the United Nations in New York, United States.

Carioca da Gema (meaning he is from the south zone of Rio de Janeiro), Oscar Niemeyer studied at the Escola Nacional de Belas Artes (current UFRJ) and in the third year he did an internship with the urbanist Lúcio Costa. Along with the urbanist, he collaborated in the project for the Ministry of Education and Health, in Rio de Janeiro.

The architect was also responsible for the MAC, the Museum of Contemporary Art, Niterói.

In 1956, Oscar Niemeyer was invited by then President of Brazil, Juscelino Kubitschek, to design the public buildings of the new Brazilian capital, to be built in the center of the country, Brasília. The work took less than five years, and the Congresso Nacional do Brasil (Brazil’s National Congress), the Palácio da Alvorada (Alvorada’s Palace), the Palácio do Planalto (Planalto’s Palace), a Catedral de Brasília (Brasília’s Cathedral) and the Supremo Tribunal Federal (Federal Court of Justice) were built. Through this work, Niemeyer was appointed as director of the architecture department of the University of Brasilia and also as an honorary member of the American Institute of Architects.

The architect Oscar Niemeyer left Brazil after the military coup of 1964, due to his militancy in the Communist Party of Brazil (PCB) and opened an office in Paris. He returned to Brazil in 1985 and received the Prêmio Pritzker de Arquitetura (Pritzer Award of Architecture) in 1988.

The 100th anniversary of Oscar Niemeyer

Oscar Niemeyer completed his 100th birthday in 2007 and was completely lucid and active. In the same year, he also received the highest award from the French government with the title of Commander of the  Ordem Nacional da Legião da Honra (National Order of the Legion of Honor).

Russian President Vladimir Putin gave him the Ordem da Amizade (Order of Friendship) award on December 14th. Still in 2007, outside Brazil, the architect began the works of his first project in Spain, in Avillés, Asturias: this was the Centro Niemeyer (Niemeyer Center).

Niemeyer was always a self-proclaimed Communist. During the dictatorship, the architect offered shelter in his office in Conde Lages (in Gloria) to some communist militants. As for religion. Niemeyer was an atheist for most of his life. His belief was based on the injustices of this world.

The loss of the architect of the curves

The architect Oscar Niemeyer died a few days before he was 105 years old (can you imagine living so long?!), on December 5th, 2012 at 9:55 pm, due to a respiratory infection.

The architect Oscar Niemeyer wrote in one of his memories:

I am not attracted to straight angles or to the straight line, hard and inflexible, created by man, I am attracted to free-flowing sensual curves. The curves that I find in the mountains of my country, in the sinuousness of its rivers, in the waves of the ocean, and on the body of the beloved woman. The universe is made of curves, Einstein’s curved universe.

Niemeyer was also a designer, having produced furniture in the 1970s. With the help of his daughter, he designed the furniture of the Alvorada Palace, the headquarters of the French Communist Party and some other furniture marketed in the same decade.

Outstanding sculptures of the architect

It is possible to know more about the life and work of the architect Oscar Niemeyer from this link.

That’s it, guys!
We just saw a bit about the life and career of Architect Oscar Niemeyer.

See you at the next tip!
Goodbye!