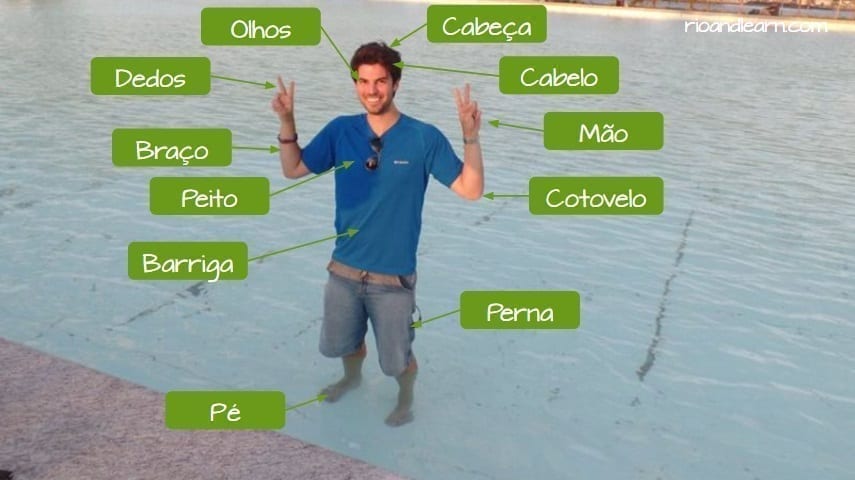 Hey friends! How about learning the body parts in Portuguese?

Learning the body parts in Portuguese

In today’s free Portuguese lesson for foreigners we will learn how to describe people in Portuguese by describing their body parts. Let’s begin from the top and see the vocabulary about the head! Do you know any body part in Portuguese?

Let’s take a look at this video and learn the names of parts of our face in Portuguese! Meet Moisés and Roberta!

So friends, what do you think of Roberta? Can you say the colors of your eyes in Portuguese? Mine are green!

Text about parts of the body in Portuguese

Now, let’s take a look at a short text using the parts of the body. In this text, we will meet Marina and Tiago, our models:

Translation of the text

Marina is short, has red hair, and large brown eyes. Marina’s eyebrows are thin and her eyelashes are long. She has a small nose and a big mouth. Marina’s teeth are very white and she has a beautiful smile. She has a fine neck, and long arms and hands. Marina has long legs, strong knees and likes to practice athletics.
Tiago, Marina’s boyfriend also plays sports. He loves swimming. He has broad shoulders and back and is very tall. Unfortunately he cannot swim this week because had a strong muscle contract in the calf. Marina has small feet and Tiago has big feet and they both are very fond of using flip-flops.

Do you which verb tenses we usually use to describe people? If you want to know more Learn Portuguese Online with one of our teachers!

Ok, you already know some body parts in Portuguese, but there are some missing. Take a look at this complete list and listen to the audios to learn how to pronounce each word correctly.

Now that we know the body parts in Portuguese we can describe a person physically. Describe yourself or friend of yours for us and send us a message in our Facebook!

Hope to see you soon!
Kisses from our Portuguese school!

Click in the links below to see more related Dicas
Presente tense of Ser, Estar and Ter in Portuguese
Simple past of ser and ir in portuguese
Conjugation of the Verb Ser in Portuguese
Verb to have in the simple present