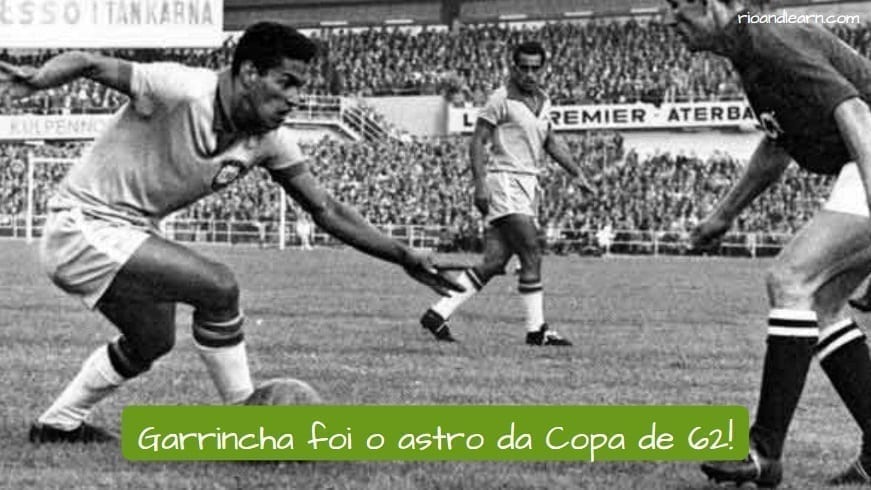 Hey, galera! We are a few days away from the FIFA World Cup, are you ready?
Let’s talk about one more cup that Brazil won. What do you know about the 1962 world cup?

1962 World Cup was held in Chile from May 30th to June 17th and, just like in the 1958 World Cup that we have studied, 16 teams participated on the competition. The matches happened in four different stadiums: Estadio Nacional de Chile, Estadio Sausalito, Estadio El Teniente and Estadio Carlos Dittborn. Here are the teams that participated in this World Cup:

Unfortunately, the 1962 World Cup doesn’t bring us good memories. It was marked by violence in the stadiums and inside the field, especially on the match between Chile and Italy, that later was known as Battle of Santiago (that’s right! Battle!).

But putting bad memories apart, Chile made a great effort for the Cup to happen. Just two years before the World Cup, the country went through two earthquakes, considered the strongest in the 20th century, and was capable of rebuilding everything on time for the games. Porque nada tenemos, lo haremos todo (because we have nothing, we’ll make everything) said Carlos Dittborn, Chilean football administrator and former president of CONMEBOL.

The 1962 World Cup was the first Cup broadcasted on TV in Brazil. Until then, Brazilian had to listen to matches on their radios. Of course, not everything is perfect and the TV broadcast had a 2 days delay, because the tapes of the games had to travel all the way to Brazil to go on TV.

Two Brazilian players were very important in this World Cup. The first is Amarildo, who substituted Pelé because he was injured. Amarildo knew that substituting Pelé was a great responsibility, but he did it, and did it really well.

The second one is Garrincha, considered the biggest star in the Brazilian team in the 1962 World cup. He played for two, moving much more, running much more and being much more than he used to be. Of course, Amarildo and Garrincha got along amazingly. Take a look:

The final match was held in Estadio Nacional de Chile where Czechoslovakia and Brazil fought for the title. Right in the beginning of the match, with only 15 minutes, Czechoslovakia scored their first goal, but Amarildo made everything even two minutes later, scoring for Brazil. In the second half of the game Brazil scored twice, one goal scored by Zito and the other by Vavá. Watch it:

Don’t forget to check the Football Positions in Portuguese.

Answer the questions below, based on what you have learned:

That’s all, folks!
We hope you are as excited as we are for the World Cup! Join us and let’s root for Brazil! ♥♥♥♥

We’ll meet again on our next Dica.
See you!