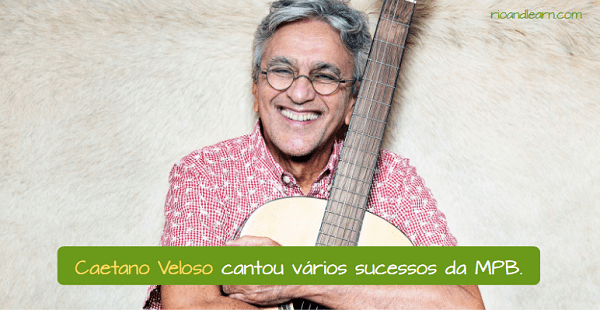 Hey guys! Have you been following our Dica of the Day? Today we will talk about one of the greatest successes of Brazilian Popular Music, the Brazilian singer Caetano Veloso. We will take a look at Caetano Veloso’s albums and some of his best loved songs.

He was born in Santo Amaro da Purification, Bahia, on August 7, 1942. He is the son of José Veloso and Dona Canô. At the age of 14 he moved to Rio de Janeiro with his family. The singer also had his songs used on soundtracks in films such as Hable com Ella by Pedro Almodóvar and Frida by Julie Taymor. For the last few decades he has been considered one of the most respected Brazilian musicians in Latin America.

The musician also presented a TV show, alongside Chico Buarque, which was called “Chico and Caetano” where he would sing and receive guests. Caetano also won several awards such as the Grammy Award for Best World Music Album for “Livro”, and also in 2000, the singer received the Latin Grammy Award for Personality of the Year.

The Tropicalist Movement in Brazil

Caetano Veloso was responsible for creating the Tropicalist Movement in Brazil bringing together musicians, actors and people from Brazilian theater. The Movement used to criticize ideals and behaviors established by the Brazilian Military Government and mixed elements from Brazilian Culture and radical aesthetic creations, through artistic performances. The singer, with the help of several musicians adept to the Tropicalist Movement, released the album Tropicalia in 1968, marking the history of music in the national territory.

Check out below some of Caetano Veloso albums

Have you enjoyed learning more about Caetano Veloso? He is one of several Brazilian musicians with excellent songs for you to learn portuguese online, applying our Funlearning method !

Here is a list of his most famous songs for you to sing along;

See you in our next A Dica of the Day!
Kisses from Rio de Janeiro.

Click on the links below to see more related Dicas
Conjugate Ouvir in Portuguese
How are the Cariocas like?
The Brazilian Samba
The Brazilian Funk