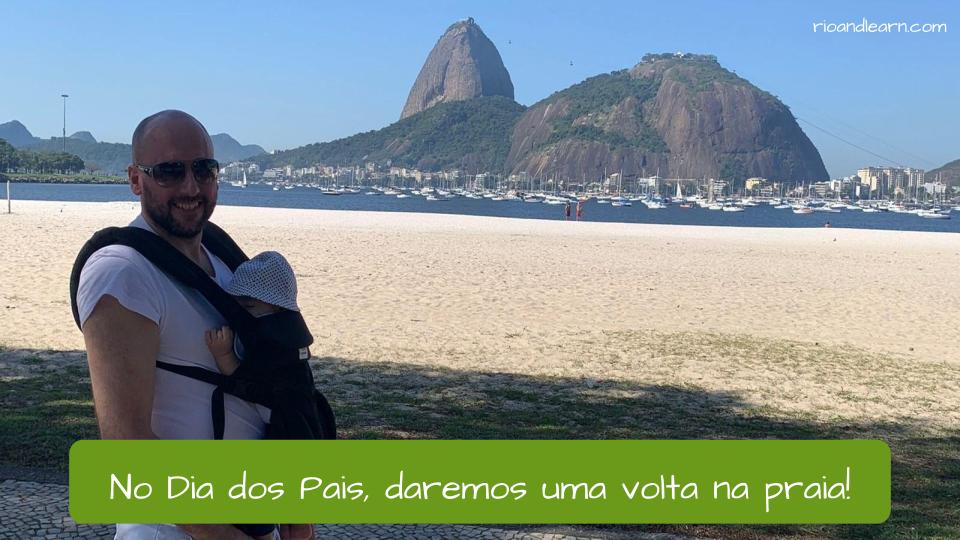 Hi, everyone! Are you ready to learn a new thing about our amazing country in today’s free Portuguese lesson? Let’s jump right into it! Today’s Dica is about a very special holiday: Father’s Day in Brazil. On this day, we celebrate the man who raised us. Do you have this holiday in your own country? If so, when is it celebrated? Do you know how to say ”Happy Father’s Day” in Brazilian Portuguese?

Why We Celebrated Brazil Father’s Day?

Father’s Day in Brazil is, like in many other countries, a special day to acknowledge all the sacrifices our fathers make for us. On this day, the fathers are greeted with tributes and gifts from their children (not only young children, for father’s we are children forever, right?).

Brazil is a country where you can find many sons who have the same name as their father. So they use “Junior” or “Filho” at the end of the name. And also, if they are the third generation with the same name “Neto” (grandson). That’s a common occurrence, in order to honor the previous generation.

How We Celebrate It?

Father figures need appreciation too! They are very important to our society and need to be respected and complimented for their efforts. This day is important because it makes clear the importance of fathers and so we can explore the essence of fatherhood as well. For this reason, we have a couple of ways to celebrate and enjoy Sunday with our fathers.

For instance, at schools there are events dedicated to the fathers where little kids deliver letters they have written to thank them for everything they have done. To give a good present, the kids usually get the help from their mothers to find something the father will like. Among the most common presents given on Father’s Day in Brazil are perfumes and clothes.

Some schools make recitals where you can see these cute little kids dancing and singing heartfelt songs to say how they love their fathers. These events usually happen on Friday, the last day of school before the actual Father’s Day.

On Sunday the family gather to enjoy a special lunch with the patriarch. This is a day to celebrate with the WHOLE family! If your father prefers to go out and have fun, everyone should accompany him to where he would like to spend his special day.

The Origin of Father’s Day in Brazil

In Brazil, this holiday was created with the intention to honor Saint Joachim, in the bible, Mary’s father and patron of fathers and grandfathers in catholic traditions. The first time the Father’s Day was celebrated in Brazil was in 1953. This year, the holiday took place on August 16th. First, it was celebrated officially only in Rio de Janeiro, then it became a national holiday.

Also, it’s different from some of the countries that already were already celebrating at the time. In Brazil, Father’s Day was not created only to pay a simple homage between families, it was indeed created with a commercial intent. This idea of implanting a holiday in Brazil to celebrate the fathers was from the adman Sylvio Bhering, who at the time was the director of one of the most important newspapers in Brazil. His intention was to unite both social and commercial matters. At first he wanted to use the day that is dedicated to praise São Joaquim, August 16th, because most of the Brazilian population was catholic. But to make it work better in our calendar, it was changed to how it is now.

When is Father’s Day in Brazil?

The Father’s day in Brazil is celebrated exactly three months after Mother’s Day (second Sunday of May). So you can count the weeks or just look for a calendar that has the dates already calculated. To make your job easier, here we have some of the dates from past years and the ones that are coming. See bellow the dates of the Father’s Day from 2022 until 2030:

Since it is on a weekend, Father’s Day in Brazil is not an official holiday, it is considered a secondary holiday. Official holidays are those which require legislation in the city, state or at the federal level to establish that on that day people can or cannot have a day off work and businesses use different work hours in order to enjoy the celebrations.  Unfortunately there are people that do work on weekends, right? So, some people don’t have a day off work to have a lunch with their children or, if they are the children, to visit their fathers.

How to Say Happy Father’s Day in Portuguese

If you are wondering how you say ”Happy Father’s Day” in Portuguese, don’t worry! Listen to the audio below and try it yourself:

On Sunday, children often wish their fathers a Feliz Dia dos Pais. On that day, you might also see another peculiar habit: if people know you’re a dad, they’ll probably wish you a Feliz Dia dos Pais as well. So, if you are in Brazil, be prepared that even total strangers can wish you a Happy Father’s Day in Portuguese!

Dia dos Pais, Dia do Papai, all these ways to say they deserve a day to be praised. This way we can create stronger family bonds and make sure we give these people something to thank them for all they do for us. Now tell us: Do you celebrate Father’s Day in your country? When is it celebrated? Do you have different traditions? Do not miss your chance of surprising your father with a nice present this year! It’s so good to see the joy in their eyes, isn’t it?

Now you know how to say Happy Father’s Day in Brazilian Portuguese, how we celebrate and even the story behind it! Are you interested in learning more about our countries dates and commemorations? Come to learn this and much more in person here in Brazil with a student visa! Our school has the best location, right next to Copacabana Beach.

Stay tuned for our next Dica do Dia!