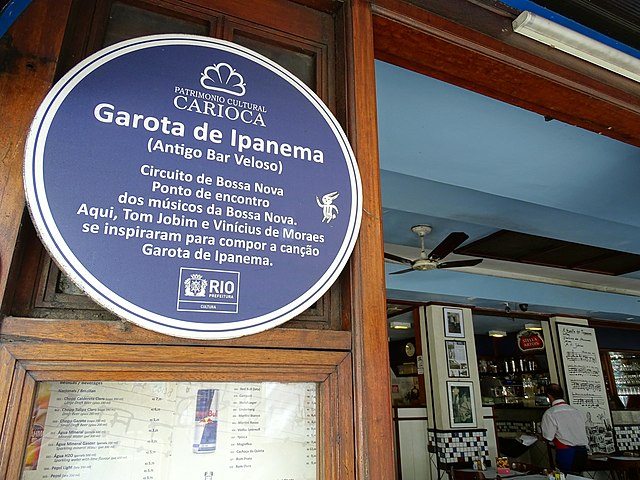 Hi guys, how are you? Everybody knows the song Garota de Ipanema from Tom Jobim and Vinícius de Moraes. However, not many people know who this so acclaimed Girl from Ipanema is; the inspiring muse of this more than beautiful song is real!

The Real Girl from Ipanema

Heloísa Pinheiro, now in her 70’s, is the original Girl from Ipanema. Back then, Helô (as she is known) needed to get married a little early to relieve the jealousy of her boyfriend (and current husband). He wanted to solve the issue of this song by beating up the authors, but in the end her boyfriend and the authors became friends, Helô confessed. This jealousy wasn’t for nothing: Tom Jobim proposed to the muse several times, not caring about the 18 years difference between them.

In 1962, Tom Jobim and his friend Vinícius de Moraes, used to spend hours drinking whisky at Bar do Veloso, in the old Montenegro Street (current Vinícius de Moraes Street), in Ipanema. They would admire the Doce Balanço (sweet swing) of the pretty girl’s hips while she passed by to go to the beach or to do anything at her parent’s house. The result: the song, “Garota de Ipanema”.

At that time, many other girls called themselves the girls from Ipanema. Then Vinícius de Moraes himself wrote who the authentic inspiring muse of the song was, ending the mystery. The inspiring image of Helô brought her a lot fame abroad.

Bossa Nova is a musical genre from the 50’s characterized by a mix of samba carioca and American jazz. When Garota de Ipanema was first performed at Boate Bon Gourmet in Copacabana, they didn’t know for sure how the melody would be. Fortunately, it was a success. Originally, the name of the song was Menina que Passa (the girl who walks by).

Here you can hear the song and watch Vinicius and Tom playing it:

The Girl from Ipanema Covers

The Girl from Ipanema has already been interpreted by many artists such as Frank Sinatra, Amy Winehouse, Cher, Plácido Domingo, Madonna and Tim Maia. The song is the second most covered song in history missing only to Yesterday by The Beatles. There are around 170 translations of this song. In 1965, it won the Record of the Year Grammy Award and in 2001 it was introduced in the Latin Grammy Hall of Fame. Let’s check out some of these incredible covers:

Gisele Bündchen in Girl from Ipanema

During the opening of the Olympic Games of 2016, the song was interpreted by Daniel Jobim, Tom’s grandson, while Gisele Bündchen walked in the catwalk.

Now, we all know the true hidden story behind the song Garota de Ipanema.

That’s all folks!
See you next time.